Texas Parks and Wildlife says to expect more sightings this time of year. 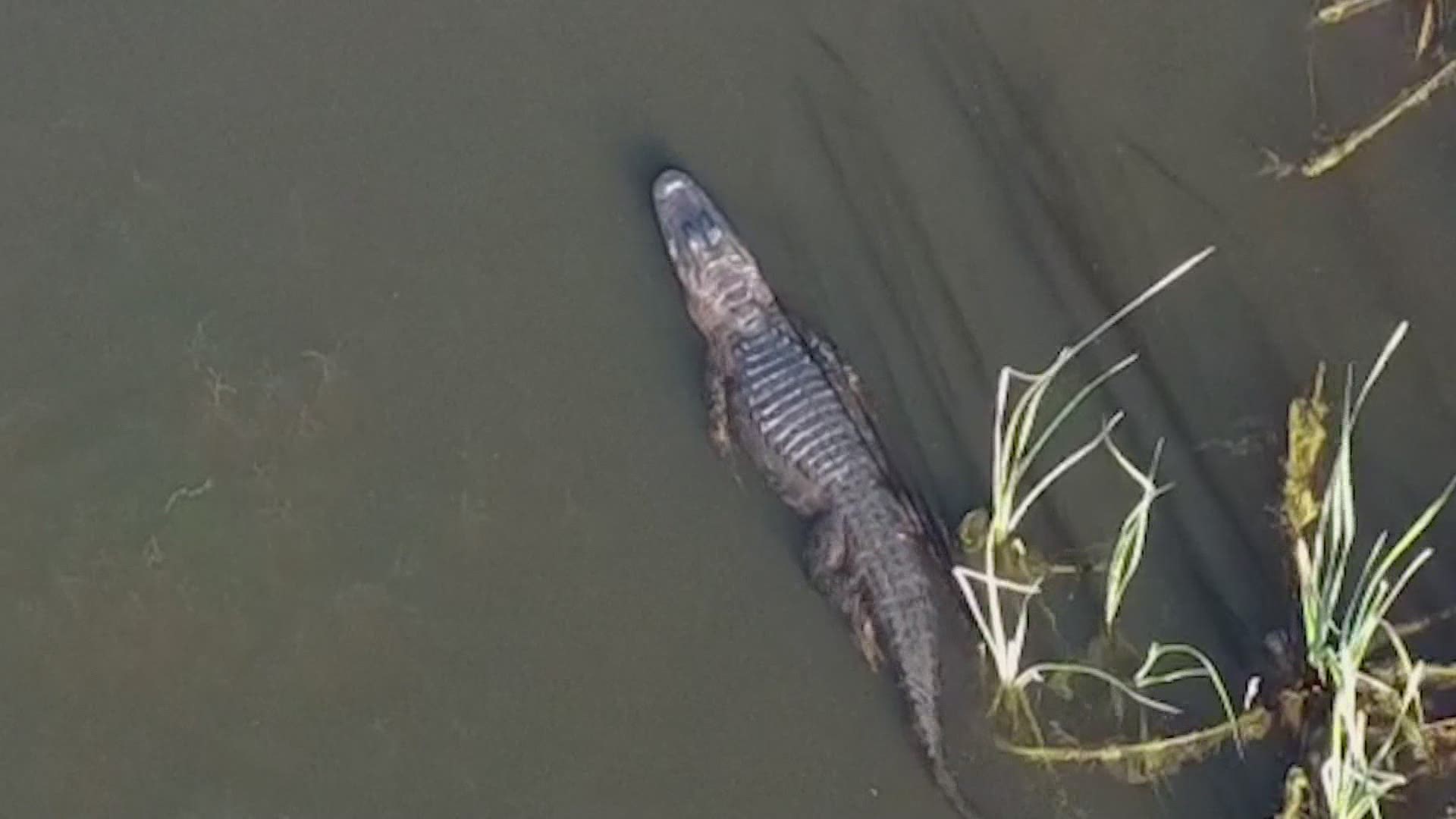 ARGYLE, Texas — Monday morning, Mike Mirfield got an excited call from his daughter to put his drone up.

“I got it out. Took off. Flew up and straight out from me and I picked it up right away,” Mirfield said.

Panning down on the marsh that backs up to his yard, he’d confirmed what a neighbor had spotted earlier that morning.

The marsh was now home to an alligator.

“It was a holy smokes moment,” Mirfield said.

“It’s interesting. It’s a little scary,” she said. “That thing is huge.”

She and her husband spent the day watching the marsh from a back window.

“People in the neighborhood are sort of going, 'OK, do we put our house up for sale?'" Mann said. “Do we put up signs that say ‘Warning: Gators present?'"

Everyone’s biggest question is how it happened.

“We’re nowhere near any large body of water,” Mann said. “It didn’t saunter down I-35.”

Jonathan Warner leads the alligator program for Texas Parks and Wildlife and says North Texas is on the fringe of alligator territory, but the sighting isn’t too surprising. Last week, an alligator was found just outside of Abilene. The statewide population is nearly 500,00, with most in the southeastern part of the state.

“We have a lot of alligators in Texas, probably more than the general public realizes,” he said.

They can wander dozens of miles, and this time of year it’s common for gators to move around and be spotted more often. He thinks the gator may have come from a gator nest at the nearby Fort Worth Nature Center and Refuge or from Eagle Mountain Lake or Lewisville Lake.

“I’m certain there are alligators in there at probably very low densities,” he said. “Best advice is to just enjoy the sighting but stay away from it and certainly don’t try to attempt to catch it or kill it.”

Warner guesses it’s likely a 6- to 8-foot young adult, but it’s tough to gauge from the video and couldn’t confidently say the gender without seeing better photos or videos.

“It takes one incident for something bad to happen,” Mann said.

Her worry is her two-year-old daughter.

“We probably won’t let our daughter come out into the backyard without checking,” she said. “It could have a family! Who knows if there’s more than one alligator in there.”

“One gator’s cool,” Mirfield said. “Two or three’s a problem.”

Most are embracing the subdivision’s new mascot. A nickname is still pending.

Texas Parks and Wildlife doesn’t plan to move the gator unless it becomes a threat and says it could be gone for good in just days because of how frequently they move.

It’s also illegal to hunt the animal without proper permits.

“Ever since we moved in here, I joked about saying, ‘There’s alligators back here,'" Mirfield said.

When he moved in, he wanted the lot that backed up to nothing, but now, he’s got a new feature.

“It’s the interstate and the sunset,” he said. “It’s even got an alligator.”