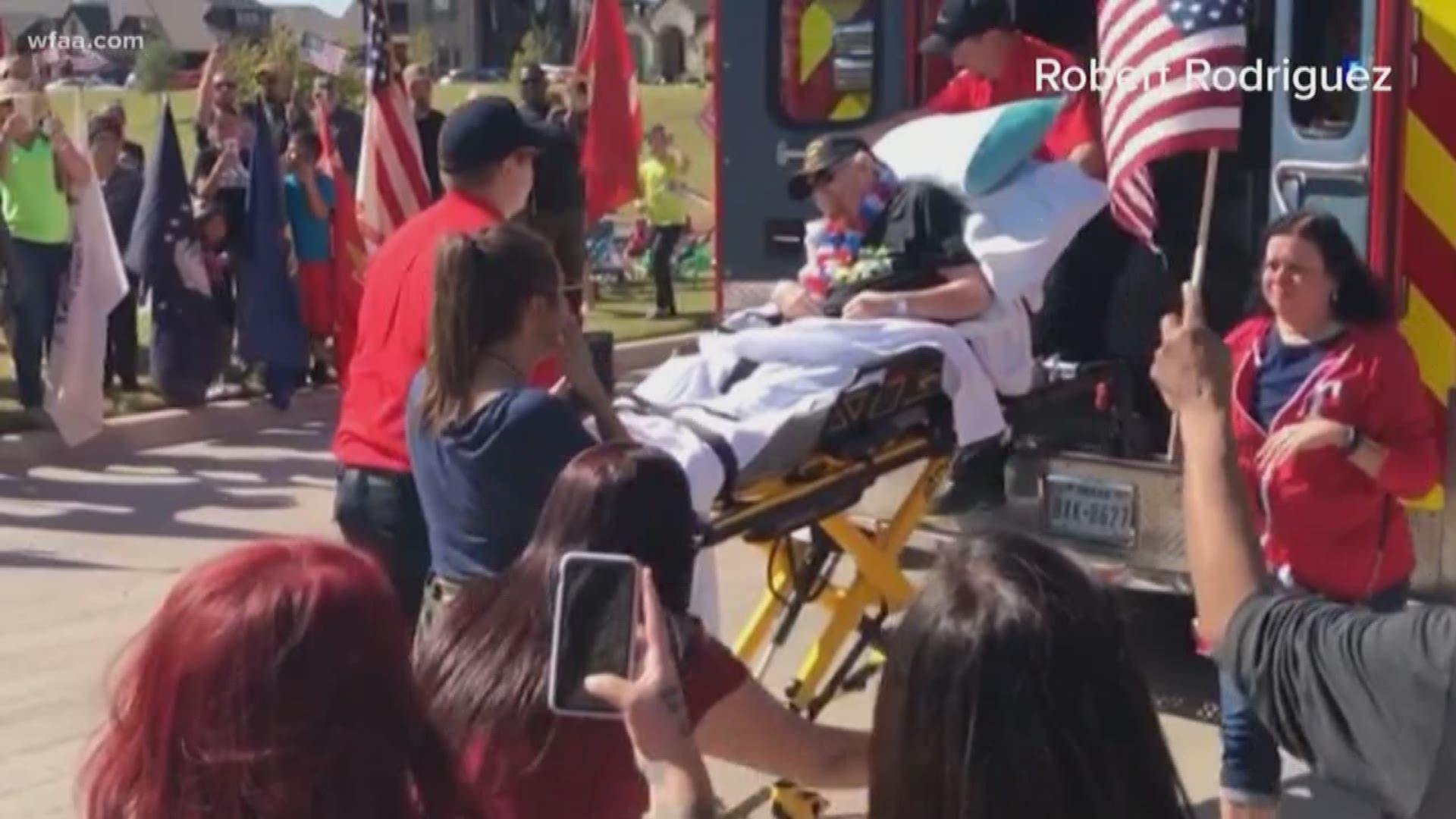 Missy Thompson Rodriguez put out a simple call on Facebook on Friday to her neighborhood group: please come welcome my dad home.

Her father, Jerry Thompson, is a Vietnam Combat Corpsman. He was coming back home to Forney on Saturday via an ambulance for hospice care.

She wanted it to be a different homecoming than when he returned from Vietnam all those decades ago and was "spit on and cussed at," she said in her post.

Could any veterans stand outside and welcome him home, she wondered.

More than just a few veterans answered her call.

The whole community came out to show their support.

"It was like our town of Forney shut down for this man to pass through," Hayley Bullard told WFAA.

Bullard and her sister Tiffany Bachle had offered to take photos for the family after seeing the post Saturday morning.

"We immediately started to track down the family via Facebook and got in contact with Missy, Mr. Thompson's daughter," she said over Facebook Messenger. "We met them at the VA hospital, in Dallas, and followed them home."

Thompson's grandson, Bullard said, was even the one to drive the ambulance carrying him home. A group of bikers also accompanied them.

As the group escorting him made its way towards the home, people pulled over with their hats covering their hearts and others showed their respects, Bullard explained.

It was a life-changing experience for her.

"Seeing everyone of all ages, races, economic backgrounds, seeing everyone come together literally over night was so beautiful," she explained. "It's hard to put into words. A man we never met brought all these people together to celebrate this man's life, his service, but most of all to celebrate America and what I believe America is."

As the ambulance pulled closer to the home, the streets became full with people gathered for Thompson's arrival, including current and former service members. The crowd chanted USA, USA, Bullard said.

Erica McCuin was one of those out there waiting to greet him.

"My son is a former soldier, and I have many family members who are in the military," she explained over Facebook Messenger. "To know how these men and women were treated when they returned home from Vietnam is heartbreaking. When I saw that story on my timeline, it was something I immediately wanted to be a part of."

She wanted him to feel appreciated.

"This man and all other vets deserve to know how much we appreciate their sacrifices," she said. "It was an incredible experience. When we arrived, there were a lot of people lining the streets, all waiting for this hero that a lot of us didn't know, but wanted to show our appreciation to."

McCuin said everyone there was just overcome with emotion, not a dry eye in sight. But what really mattered was the way it made Thompson feel.

"She [Thompson's daughter] said when her dad came home from Vietnam, he never thought he was a hero, and today he knows that he is a hero to all of us," McCuin recounted.

It's a world she wants to see more of.

"This is what our world should be like," she said. "I don't know her or her family. I don't know anything about them. Their beliefs or political views. I just know that this man and his family made a sacrifice for mine, and at the very least I owe him my gratitude."

Erin Steed brought her whole family out to welcome Thompson home. She wanted her kids to experience something special like this as well.

"The first thing I thought was how our kids don’t get many chances to honor a man like this first hand," she explained. "Our kids are 11, 13 and 15, and the only wars they know about, they read in history books. We have talked to them about what’s happening in Syria and how kids just like them are going through really hard and frightening things. But none of that is tangible. This was something they could see, feel and be part of."

Steed said she had no idea how many would show up, but she grabbed about 20 of the small USA flags they use to decorate their lawn for the holidays to give out to make sure people had a flag to wave as Thompson came home.

"We were pretty far from him, but I saw him take a flag and talk to people," Steed said.

Thompson could be seen smiling in Bullard's and her sister's photos, waving a small flag as he was greeted by the crowd that had gathered there just for him.

"He called out 'Thank you all very much!'" Steed recalled.

It was an event that was felt throughout the community, one of coming together and uniting for a common cause. And it was a sight to see for all involved.

"We were just so honored to be a part of this and want to thank the family for letting us be a part of such a life-changing moment," Bullard said.

For more on WFAA:

RELATED: Fort Worth native, D-Day veteran passes away at the age of 98