States on hook for billions under Trump's unemployment plan

A plan from President Donald Trump to extend additional unemployment benefits requires states to provide 25 percent of the funds. 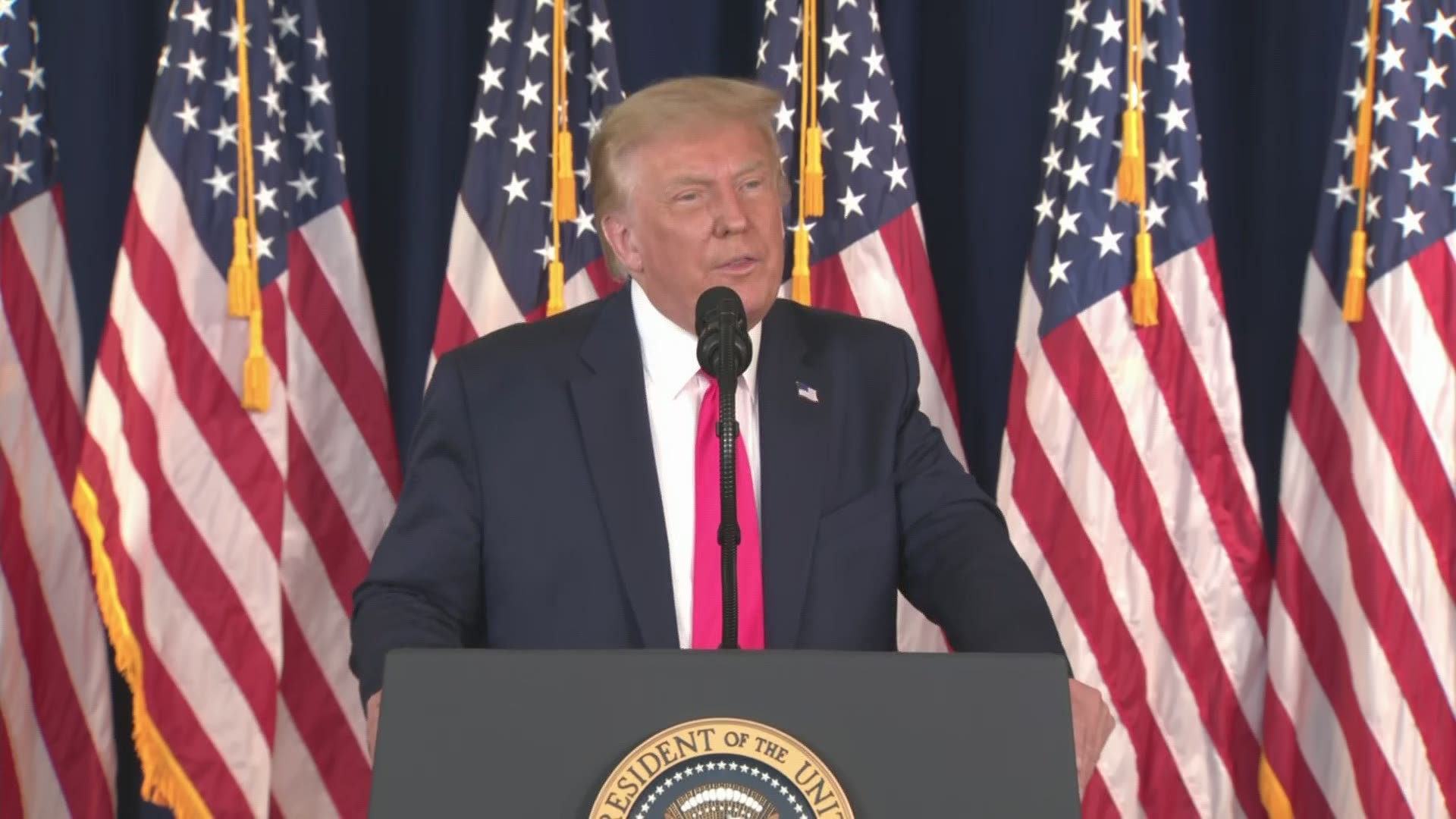 FALLS CHURCH, Va. — Whether President Donald Trump has the constitutional authority to extend federal unemployment benefits by executive order remains unclear. Equally up in the air is whether states, which are necessary partners in Trump's plan to bypass Congress, will sign on.

Trump announced an executive order Saturday that extends additional unemployment payments of up to $400 a week to help cushion the economic fallout of the pandemic. Congress had approved payments of $600 a week at the outset of the coronavirus outbreak, but those benefits expired Aug. 1 and Congress has been unable to agree on an extension. Many Republicans have expressed concern that a $600 weekly benefit, on top of existing state benefits, gives people an incentive to stay unemployed.

Many states are already facing budget crunches caused by the pandemic. Asked at a news conference how many governors had signed on to participate, Trump answered: “If they don't, they don't. That's up to them.”

Trump expressed a different view on Sunday night, following a day of state officials questioning how they could afford even $100 per person in additional weekly payments. He told reporters as he returned to Washington that states could make application to have the federal government provide all or part of the $400 payments. Decisions would be made state by state, he said.

Several state officials questioned how Trump's initial proposal would work and often expressed doubt that they could afford to participate at the level Trump initially set without using federal funds.

Aubrey Layne, secretary of finance for Virginia Gov. Ralph Northam, a Democrat, said in a phone interview Sunday he believes it would be feasible for Virginia to participate in such a program if states are allowed to use money that's been allocated to them under the already passed CARES Act. He said his preliminary understanding is that states can do so, but he and others are waiting to see the rules published.

The better solution, Layne said, would be for Congress to pass legislation.

“It's ludicrous to me that Congress can't get together on this,” he said. “I think it would have been better for the president to use his influence in those negotiations, rather than standing on the sideline and then riding in like a shining knight.”

Details about the program were confused on Sunday — and that was even before Trump's declaration that states could ask the federal government to pay all or part of the $400 week payments.

On CNN's “State of the Nation" White House economic adviser Larry Kudlow said conflicting things about whether the federal money was contingent on an additional contribution from the states. Initially Kudlow said that “for an extra $100, we will lever it up. We will pay three-quarters, and the states will pay 25 percent.” In the same interview, though, he later said that “at a minimum, we will put in 300 bucks ... but I think all they (the states) have to do is put up an extra dollar, and we will be able to throw in the extra $100.”

A clarifying statement from the White House said the “funds will be available for those who qualify by, among other things, receiving $100/week of existing assistance and certify that they have lost their jobs due to COVID-19.”

Several advocacy groups that follow the issue, though, said it's clear the way the executive order is structured that the federal money will be contingent on states making a 25 percent contribution.

“I don’t know if the president is genuine in thinking the executive order is a resolution or if this is just a tactic in the negotiation," Cuomo said. "But this is irreconcilable for the state. And I expect this is just a chapter in the book of Washington COVID mismanagement.”

In Connecticut, Democratic Gov. Ned Lamont said on CBS' “Face the Nation” that the plan would cost his state $500 million to provide that benefit for the rest of the year, and called Trump's plan “not a good idea.”

“I could take that money from testing — I don't think that's a good idea,” Lamont said.

Still, he was noncommittal about whether Ohio would participate.

“We’re looking at it right now to see whether we can do this,” he said.

Christina Stephens, a spokeswoman for Democratic Louisiana Gov. John Bel Edwards said: “Right now we are reviewing the President’s order to determine exactly what the impact to the state would be.”

In Maryland, Michael Ricci, spokesman for Republican Gov. Larry Hogan, said in an email that “we will wait on new guidance from US Department of Labor before looking at any (unemployment insurance) changes.”

In Minnesota, Department of Employment and Economic Development Commissioner Steve Grove said his agency is “awaiting further guidance from the U.S. Department of Labor.”

Nearly 2 million Pennsylvanians are relying on that additional unemployment to pay their bills and put food on the table.

Credit: AP Photo/Susan Walsh
President Donald Trump walks to his car after arrive in Southampton, N.Y., on Marine One, Saturday, Aug. 8, 2020. Trump is attending two fundraisers during his visit to the Hamptons.

Kevin Hensil, a spokesman for Democratic Gov. Tom Wolf of Pennsylvania, said “reducing the benefit by a third will make it harder for families to get by and it places a larger financial burden on states.” He said state officials are studying the impact of the cuts.

And in Michigan, Democratic Gov. Gretchen Whitmer said in a press release that Trump “cut federal funding for unemployed workers and is requiring states that are facing severe holes in our budgets to provide 25% of the funding.”

“Most states will take months to implement it, because it’s brand new. It’s sort of put together with spit and paste. And many states, because they have to chip in $100, and they don’t have money, won’t do it,” Schumer said.

Many states struggled to adjust outdated computer systems to accommodate the $600 payment, which along with the massive influx of new claims resulted in long delays in providing benefits. Reprogramming the computers again to accommodate the new amount could result in similar glitches.

On ABC, Kudlow said that many of those outdated systems have since been upgraded.

“I don’t think there will be a huge delay. Labor Department has been working with the states. The states are the ones that process the federal benefits before. So, I don’t see any reason why it would be all that difficult,” he said.