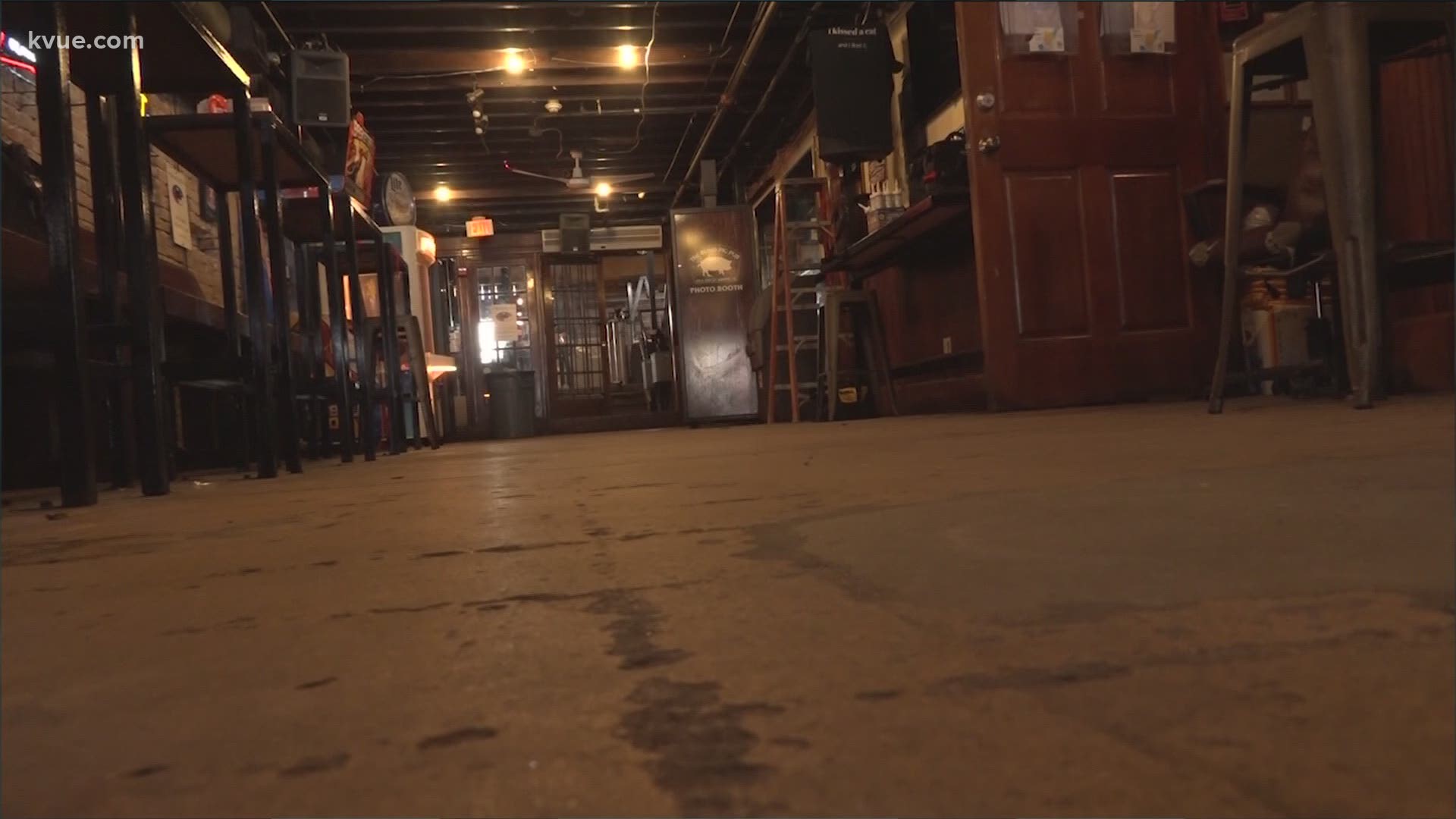 AUSTIN, Texas — In conjunction with Texas Bars and Nightclubs Alliance (TBNA), multiple bars on Sixth Street took off their border and cleaned up on Friday to prepare for a "soft opening" later that night. TBNA said this will not include the public but solely give businesses and employees an opportunity to put into practice those procedures in its 10 Part Plan.

"You have to disinfect your hands before coming in," said Blind Pig Pug owner Bob Woody. "We've put seating on the dance floor so we can't use that."

He added, "We've provided additional staff to kind of run interference and not allow people to pull tables together and cluster in large groups."

Gov. Greg Abbott has not given bars the OK to open yet, but mentioned in April he hoped to see them open by mid-May.

The scenes in Texas and Wisconsin on Wednesday night were polar opposites.

Meanwhile in Texas, bars are still unable to reopen due to the coronavirus pandemic, and Sixth Street, along with other popular entertainment districts in Austin, remain a ghost town at night.

At a press conference on May 5, Gov. Abbott said, "We want to hear from bars about the types of strategies that you can use, understanding this key point – not all bars are the same."

At an earlier press conference on April 27, the governor added bars to the list of Texas business he hoped could potentially reopen by mid-May. But it's now mid-May and stepping inside of a bar is still a no-go.

"It's really frustrating right now, not being able to not being able to employ our musicians along with our bartenders and bar staff," said Michael Gerard, the owner of Speakeasy in Downtown Austin, a well-known live music venue and bar. "We may have to start thinking about a new a new tagline instead of Austin being the Live Music Capital of the World, because we may very well lose it."

Gerard said he does respect the governor's approach to reopening Texas and understands why. His concern is not knowing when they can actually start reopening.

"All we're asking for is give us a timeline. Let us know. You know, we have to plan. We can't just open on the spur of the moment, and hopefully, hopefully just trust in the fact that we we can do it, you know," Gerard said.

So to prepare, Gerard is going to test run some safety guidelines on Friday night. The public is not allowed in, but he'll have a few employees inside of Speakeasy while a live band performs for a Facebook Live feed.

According to a press release, the Texas Bars and Nightclubs Alliance is encouraging its members to conduct a soft reopening this coming Friday, May 15 from 6 p.m. until 10 p.m. But it will not include the public. The soft reopening is to solely give businesses and employees an opportunity to put into practice those procedures in its 10 Part Plan, which TBNA presented earlier this week.

As for Gerard, he said he will be following guidelines once he is actually able to open his doors to customers again.

"We're not going to allow any any dance floor activity in the beginning. You know, we're just going to have people seated at tables six feet apart and, you know, if they want to come in, they can come in. If they don't feel safe, they can, of course, stay home," Gerard said. "Don't throw the baby out with the bathwater. I mean, you know, let them open. And, you know, if they're irresponsible about it, you know, go after them, not the entire industry."

One part of the proposal calls for the City to spend up to $35 million to buy some venues, and then act as a landlord with the goal of keeping iconic spots alive.

"We all benefited from Austin's role as Live Music Capital of the World. And we're in a really precarious time right now. Our musicians are creative artists. Our music venues are really facing extremely difficult financial times," Tovo told KVUE on Thursday.