"My family has been through almost two years of deplorable living conditions." 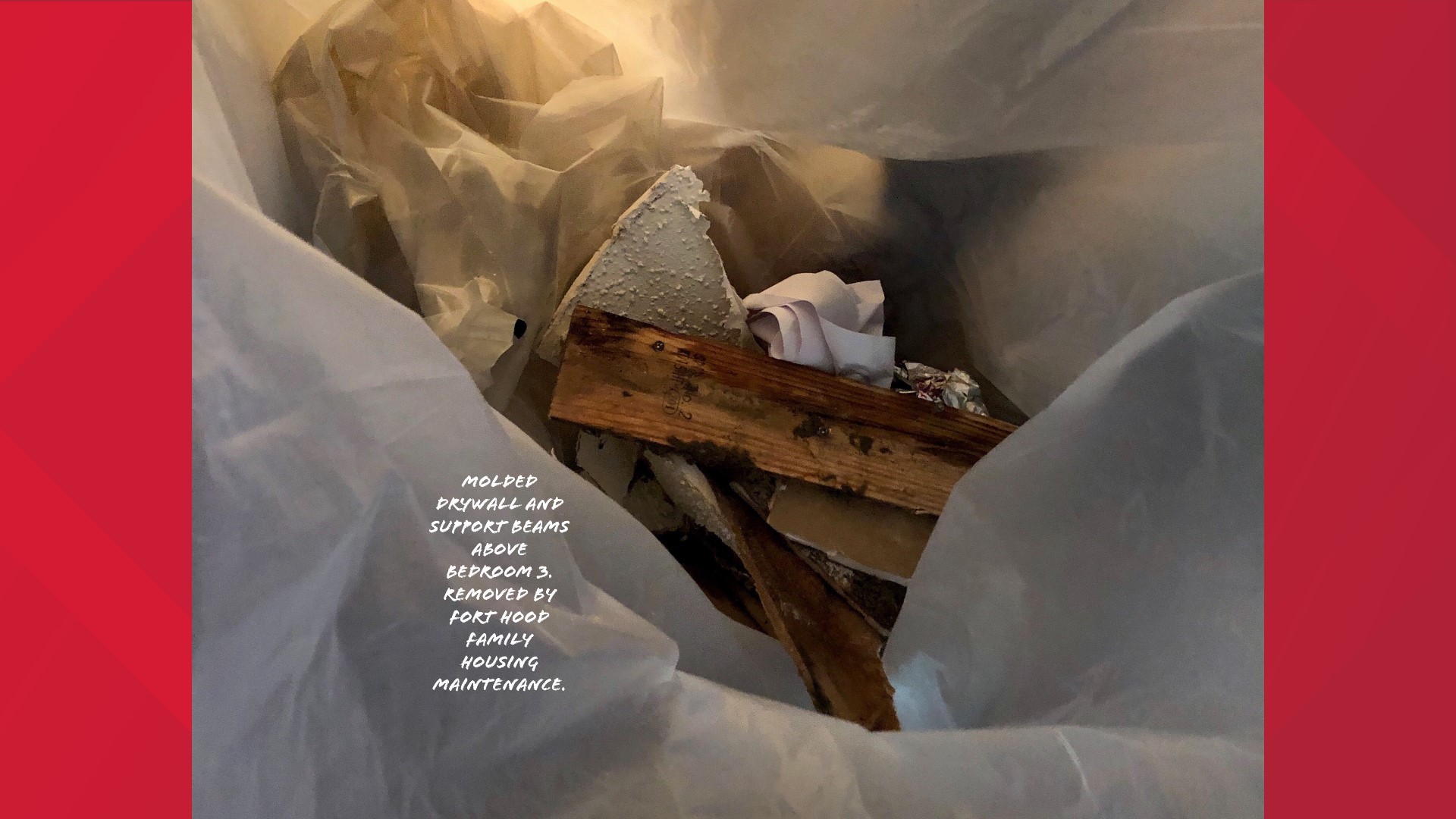 FORT HOOD, Texas — A military family living in Comanche Village on Ft. Hood is still without a home after the discovery of black mold inside their on-post housing. The family said the mold left them sick and without answers while living in a hotel room.

"My family has been through almost two years of deplorable living conditions," said Jessica Scott, a military wife and mother who said the Army doesn't seem to care.

Scott said toxic mold is inside her Comanche Village home, and all four of her kids are sick.

"They have all, since the day we moved in there, been ill," she said. "It's to the point the have declined in school, needed to be enrolled in special education and barely meeting grade levels."

She also said her youngest, missed milestones because of sickness.

"My youngest, one year old, was not meeting milestones," she said. "My 3-year-old was developing random coughs, hives, all sorts of random medical conditions were arising. It was just being swept under the rug."

Scott said the family has taken steps to find out what's wrong because Fort Hood Family Housing isn't doing so. She said they took black mold samples and sent them to a Florida for analysis, and those analyses came back positive.

She said her family is undergoing extensive testing and the doctor is treating them is very concerned.

She doesn't understand why Ft. Hood is not.

"Chain of command has been involved and we still have not seen anything," she told 6 News on the phone between appointments, "We've been in a hotel since June 25. We were out of it for three weeks inside another home on Ft. Hood that also contained mold."

"They had testing done yesterday and we were told there was no mold in the home, yet there's water damage to several walls," Scott said. "Yet there's mold, suspected fungal growth, inside air ducts and registers and return vents"

6 News reached out to Ft. Hood Family Housing for comment about the claims made by the Scott family. They responded with the following statement:

"Fort Hood Family Housing is committed to providing outstanding communities where military families can live, work and thrive. From staffing additions to address a greater volume of work orders at a faster pace, to an enhanced customer service training curriculum designed to positively impact our day-to-day interactions with our residents, to innovative technology and tools that foster deeper levels of connection, dialogue and transparency, our dedication to an exceptional resident experience remains steadfast.

The safety, health, well-being and satisfaction of our military personnel and their families is our top priority and we look forward to continuing our commitment to service excellence."

Scott said two years is far too long and she doesn't believe the situation should have been allowed to get to this point..

"There is numerous situations that shouldn't be happening to anyone, let alone a military family." she said. "My husband is suppose to deploy in October, and they still tell me he's deployable even though we have no home to live in."

She said the mold has continued to take its toll on them as they remain in a hotel, making her family sensitive and sick. She said her youngest child was vomiting so badly they needed to switch hotel rooms Monday.

"My son last night was sick, projectile vomiting. My 1-year-old, due to the mold we had to be exposed to for two hours yesterday for them to do testing," she said. "The person doing it wasn't even certified to do the water intrusion testing."

"I am just appalled by the whole situation," Scott said. "I think it is absolutely unacceptable that our military, our government, just everyone involved is allowing these situations to happen, especially to children."