Laura Terry put her message in the bottle and was excited about it being found one day. That one day came two years later, along with a now pen pal in Ireland. 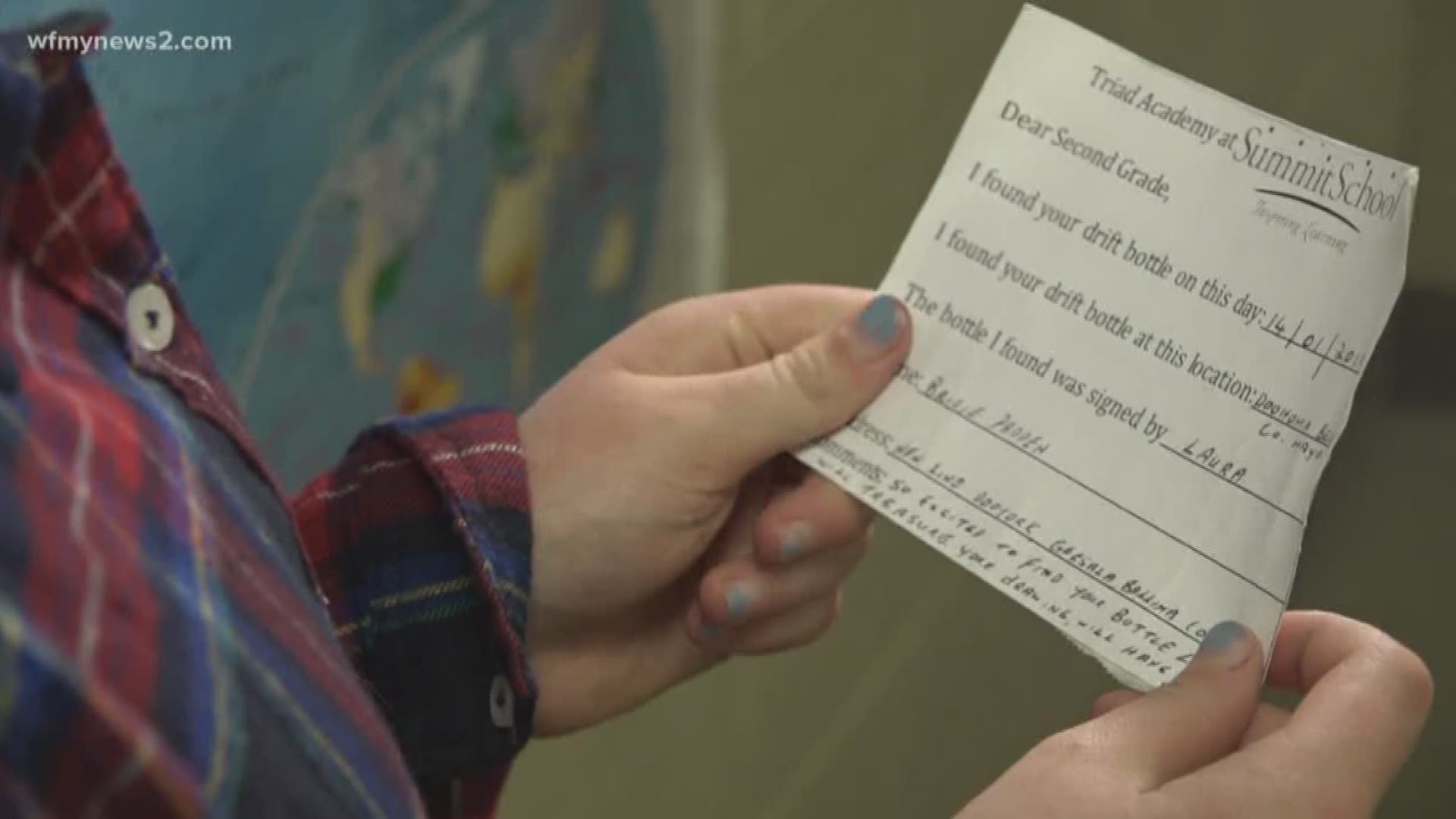 WINSTON-SALEM, N.C. — From Winston-Salem to the coast of Ireland… A long journey for a message in a bottle, but after two years in the water, someone found a Winston-Salem's girl's message.

In her second-grade science class, Laura Terry wrote a message and put it in a bottle.

“I remember I put a pencil in it and I drew something,” Terry said.

Since 2013, Mrs. Susan Schambach, a science teacher at the Summit School in Winston-Salem, has used the activity to teach the strength of stream currents, particularly the warm and “mighty” Gulf Stream off the coast of North Carolina.

Every year, she has her second-graders personalize the messages and takes them to Wilmington, where Intercoastal Angler’s captain Ken Upton releases them into the Gulf Stream during his deep-sea fishing expeditions.

“He takes them about 40 miles off shore,” Mrs. Schambach said.

When Terry put her message in the bottle, she was excited about it being found one day, but wasn’t too optimistic.

Laura's now in fourth-grade and her message and drawing made it all the way to Ireland into the hands of a grandmother, Bridie Patten, and her family at Doohoma Beach.

In January, Mrs. Schambach received the returned postcard from the school’s receptionist.

During the student’s snack time, she announced in front of the entire fourth-grade class that Laura’s bottle had been found.

“I was so excited!” Terry shared. “I knew one bottle was going to get found from our class, but I was very positive it wasn't going to be mine.”

Terry's bottle is the fifth from the school found along the English canal. The first one was found February 24, 2014 in Portugal.

Other three were found off the coasts of France.

“All of a sudden… Ireland!” Mrs. Schambach said.

“I was really excited, I mean, I was kind of doubting myself,” Terry added.

As if it were the luck of the Irish, Terry just found out she'll get to meet her new pen-pals this summer.

Her parents had planned a surprise 50th anniversary trip to Ireland for her grandparents, which they’ll now be joining.

“We're gonna try and figure out how to get connected or something,” Terry said.

A new round of second-graders is releasing their own bottles into the gulf stream, later this month.

Mrs. Schambach and the rest of the school look forward to more being found.

RELATED: Message in a Bottle Leads to An Across the Ocean Meeting Between a French Girl, NC Man