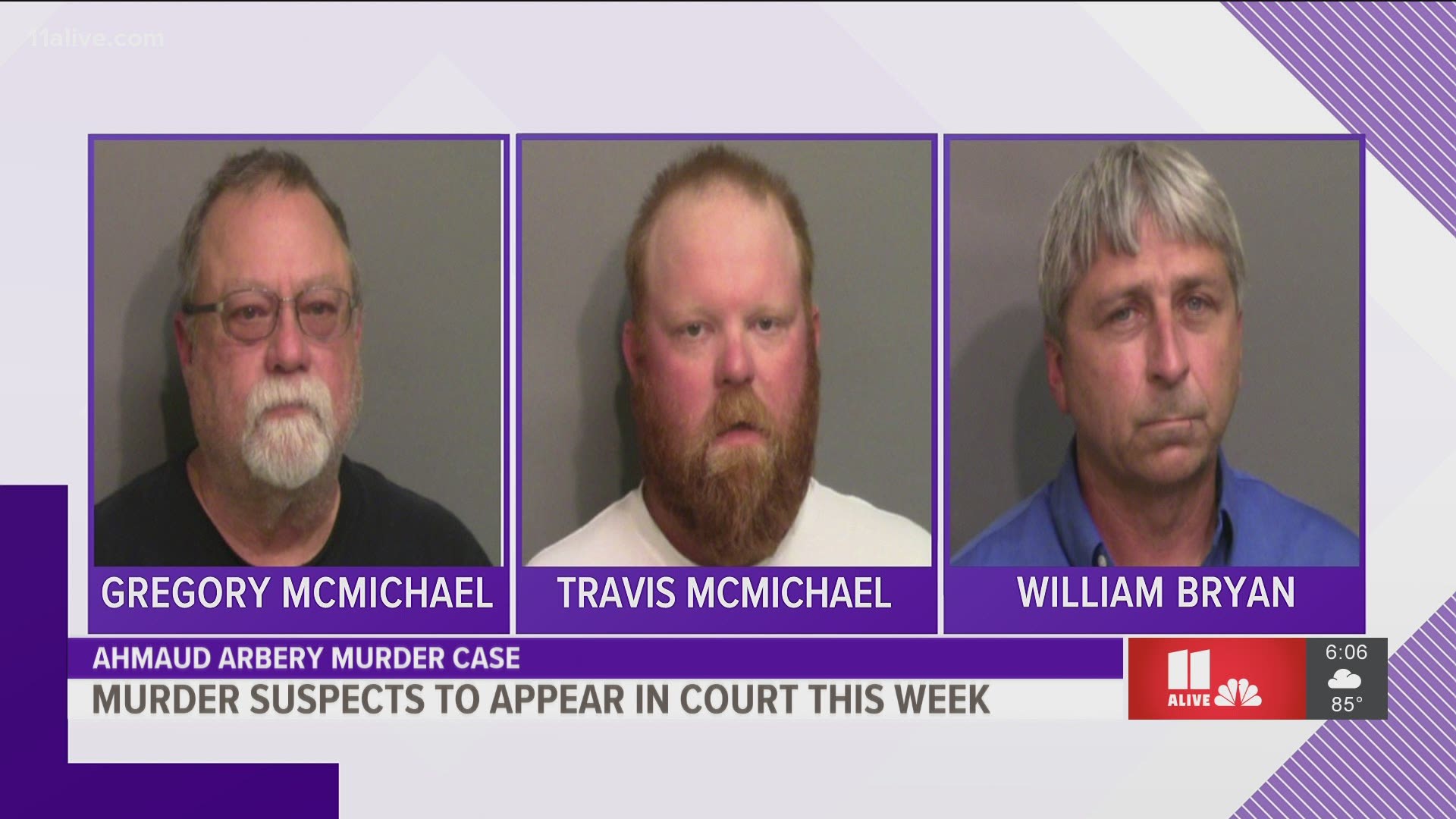 BRUNSWICK, Ga. — The three suspects in the shooting death of Ahmaud Arbery are expected to return to court in Brunswick on Friday morning at 10 a.m. for a motions hearing.

Three motions have been filed in court in Glynn County on behalf of one of the men charged in Arbery's death.

Fifty-year-old William "Roddie" Bryan, Jr., is seeking bail in the case. He has been held without bond since his May 20 arrest in connection with the February 23 shooting death of Arbery.

Bryan was driving behind Arbery as he was running on a Brunswick street where Gregory McMichael, 64, and Travis McMichael,34, accosted Arbery.

Travis McMichael got into a physical struggle with Arbery and ended up shooting him. Bryan recorded video of the incident as it occurred, which was later released on the internet.

In his motion, attorney Kevin Gough says that while Bryan has lost his job since his late May arrest, he has employment prospects and should be released.

A second motion from Gough is seeking to strike down what he calls the "illegal appointment" of Cobb County District Attorney Joyette Holmes as the specially-appointed prosecutor in the Arbery case.

Gough's motion says he is filing the motion "pursuant to the Fifth and Fourteenth Amendments of the United States Constitution" as well as two separate sections of the Constitution of the State of Georgia.

His motion says that the previous district attorney in the case, Tom Durden, did not provide sufficient grounds for disqualifying himself from the case.

According to the motion, since he did not do so in his letter to Georgia Attorney General Chris Carr, Gough says the attorney general "overstepped his legal authority under Georgia law and improperly usurped control over the prosecution of the matter."

Durden was the third district attorney tied to the case, and recused himself in a letter to the attorney general in early May.

Following that recusal, Carr appointed Holmes as the special prosecutor in the case.

The third motion is asking for "relief from prejudicial and inflammatory statements" made by individuals speaking on Arbery's behalf.

That motion seeks to gain relief from people who Gough says have been either speaking on behalf of Ahmaud Arbery's family.

According to the motion, those persons have been making statements to the national media about Bryan that are characterized as "malicious, prejudicial and inflammatory." The motion maintains that Bryan has not committed any crime and is a "key witness for the prosecution."

The motion also says that "Mr. Bryan conspired to murder Mr. Arbery, and/or that he is an accomplice to murder, offenses with which he has never been charged."

However, according to Holmes, along with Travis McMichael and Greg McMichael, Bryan is facing a total of nine charges in the case: malice murder; felony murder (four counts); aggravated assault (two counts); false imprisonment; and criminal attempt to commit false imprisonment.

Arbery, who is black, was shot and killed in a Brunswick neighborhood after being confronted by the McMichaels, who are white. The pair, who were armed with shotguns, told police they followed Arbery as he was jogging because they thought he looked like a man they suspected of burglaries.

The pair were allowed to walk free after the shooting, and activists accused authorities of bungling the investigation, which has only received renewed interest, they claim, after leaked video showing the shooting drew national outrage.

RELATED: What we know about the timeline of events in the Ahmaud Arbery case

Here is a timeline of events in the case:

FEB 11: Police respond after Travis McMichael calls 911 to report seeing a man run into a home under construction. It's unclear if that man was Ahmaud Arbery. Police take a report.

The owner for the home under construction separately told police he had installed cameras because of similar reports of someone entering the home without permission. However, that homeowner said he never spoke to the McMichaels personally about the situation.

FEB 23: Arbery is shot and killed after being confronted by Gregory and Travis McMichael, who followed Arbery because they told police they thought he looked like a burglary suspect. They were never arrested.

FEB 24: The District Attorney for the Waycross Judicial Circuit, George Barnhill, said he sees no "grounds for an arrest" of any party involved in the case, according to an undated early April letter from Barnhill's office to the Glynn County Police Department, saying that the McMichaels and a third person, Bryan William, were following Arbery in "hot pursuit."

FEB 27: In a letter, District Attorney for the Brunswick Judicial Circuit, Jackie L. Johnson, recuses herself from the case, citing the fact that Gregory McMichael is a former investigator with her office.

EARLY APRIL: The undated early April letter from Barnhill announces that he will, too, step away from the case and will ask for another district attorney to be appointed to handle the case. According to the letter, it came after the April 1 autopsy report was received, but prior to the April 13 appointment of Tom Durden to the case. The letter goes on to lay out why he thought there was "insufficient probable cause to issue arrest warrants."

APRIL 13: District Attorney for the Atlantic Judicial Circuit, Tom Durden, is appointed to handle the case from Glynn County

APRIL 29: The Glynn County Police Department requests the Georgia Bureau of Investigation to look into alleged threats against the department and individuals involved in the investigation

MAY 5: Video of the fatal shooting surfaces online, renewing calls from the community and across the nation for the arrests of Gregory and Travis McMichael.

On the same day, the Glynn County Police Department asks that the GBI look into the release of the video, not the incident itself.

Special Prosecutor Durden, appointed to handle the case, makes the recommendation that it be presented before a grand jury for criminal charges.

Later that evening, both Durden and GBI director Vic Reynolds speak. The special prosecutor formally requests that the GBI open an investigation into the incident.

MAY 6: The GBI's Kingsland office officially launches their investigation, and Reynolds promises to "seek the truth" of what happened.

Demonstrators gather at the state Capitol in masks to rally for justice.

MAY 7: Gov. Brian Kemp calls the video of the shooting "absolutely horrific" during a press conference on the state's response to the coronavirus outbreak, and promises the GBI will conduct a thorough investigation.

The GBI announces Gregory and Travis McMichael have been arrested at their home near Brunswick, Georgia. They are charged with murder and aggravated assault.

MAY 8: In a news conference, the GBI announced that there was "more than sufficient probable cause" for felony murder charges. The agency added that it is also looking at the possibility of charging the person who recorded the video, William "Roddie" Bryan. Bryan hires a lawyer.

Later that night, District Attorney Jackie Johnson releases a statement denying to allegations by Glynn County Commissioners that her office blocked the arrests of the McMichaels immediately after the shooting.

MAY 9: New video obtained by 11Alive sister station in Jacksonville, Florida appears to show a man, whom a prosecutor identifies as Arbery, entering a home under construction, walking around and leaving.

MAY 10: The GBI is called to investigate social media threats against Arbery protests. It led investigators to 20-year-old Rashawn Smith, who reportedly created a profile pretending to be someone else and made "hoax threats." He was later arrested and charged with dissemination of information relating to terroristic acts.

MAY 11: Cobb County District Attorney Joyette Holmes is assigned to lead the murder case, replacing special prosecutor Tom Durden, based in Hinesville. She becomes the fourth prosecutor to take over the case.

Also, the Justice Department federal prosecutors say they are assessing whether to bring hate crime charges against the McMichaels.

An autopsy report for Arbery is also released the same day, showing Arber was shot in the left upper chest and lower middle chest. He also had a gunshot graze wound on the inside of his right wrist. The report also shows that did not have drugs or alcohol in his system.

MAY 12: The GBI is requested by state Attorney General Chris Carr to investigate the handling of the case by previous district attorneys offices.

MAY 19: GBI agents execute a search warrant at the home of the suspects, Gregory and Travis McMichael. It's not clear what agents were looking for.

MAY 21: The man who recorded video of Gregory and Travis McMichael following and shooting Ahmaud Arbery is arrested by the GBI. William “Roddie” Bryan Jr., 50, is charged with felony murder and criminal attempt to commit false Imprisonment.