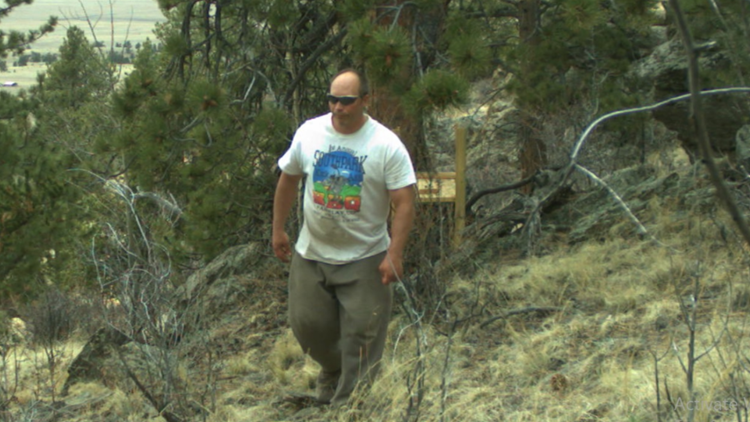 Photo by: Colorado Parks and Wildlife
Jeff Bodnar at a trap site out of season.

PARK COUNTY, Colo. — A 46-year-old man has received a lifetime ban on hunting, fishing, and trapping in Colorado and the other 48 states in the Interstate Wildlife Violator Compact after an investigation revealed his involvement in numerous wildlife crimes.

Jeff Bodnar, 46, of Hartsel, Colo. was arrested for 22 crimes stemming from an investigation by Colorado Parks and Wildlife (CPW).

Bodnar pleaded guilty on May 7 to possession of a weapon by a previous offender – a class 6 felony, and unlawful possession of two black bears and a mountain lion. He was fined $4,593.50 and sentenced to 10 days in jail, which has been suspended pending successful completion of probation.

CPW's Wildlife Commission approved the lifetime suspension against Bodnar at its June meeting. Under it, Bodnar would face fines ranging between $1,000-10,000 and up to 90 days in jail if he is detected in any hunting, fishing or trapping activity in the future.

"Mr. Bodnar appears to possess a complete disregard for Colorado's hunting laws and a total indifference for wildlife," wildlife officer Ian Petkash said. "We take these investigations seriously because of the toll someone like this can take on local wildlife populations."

In 2008, according to CPW, Bodnar was convicted of a federal felony for attempting to sell illegally taken bobcats across state lines. He was sentenced to 27 months in federal prison.

In the most recent case, CPW received a report that Bodnar had resumed hunting and trapping while under a suspension. Wildlife officers then initiated a multi-year investigation that resulted in his arrest.

"The illegal exploitation of wildlife will not be tolerated and we will continue to aggressively investigate wildlife crimes in this state," Petkash said. "It is important to note that these type of actions are those of a poacher, not a hunter, and it is good to bring somebody like this to justice."