COVID-19 canceled the commencement ceremony 40-year-old Bol Malual fought a lifetime to achieve. His new "family" at Children's Health made sure he didn't miss it. 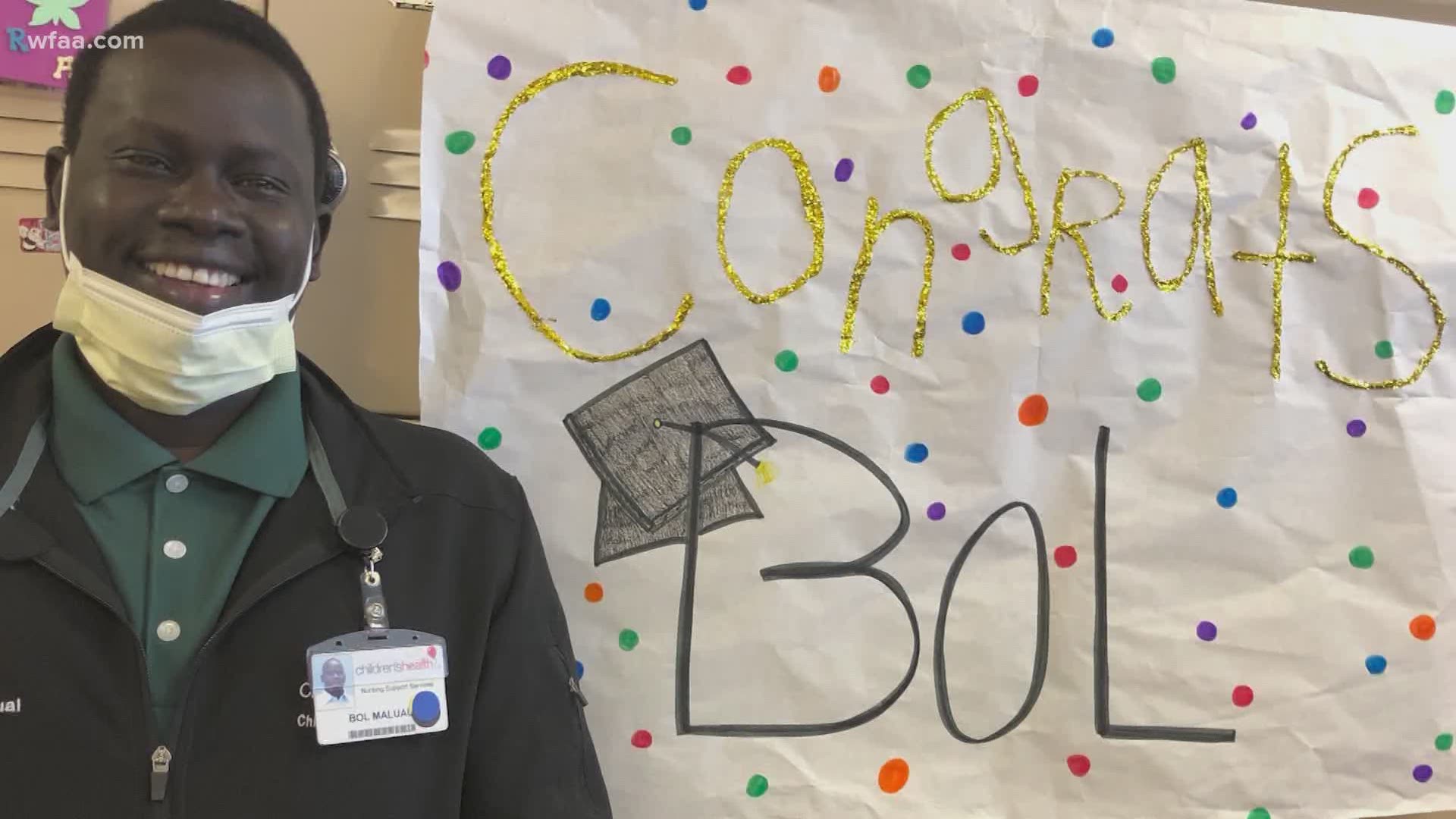 DALLAS — The coronavirus pandemic canceled a lot of things: family gatherings, weddings, commencement ceremonies just to name a few. But when you are laser focused on your American dream, with your new American family in your corner, even a pandemic won't get in your way.

Such is the story of Bol Malual. He's 40 now and employed as a health unit coordinator at Children's Health in Dallas.

But two decades ago he was one of the "Lost Boys of Sudan," the young boys caught up in a brutal civil war, sent to the relative safety of camps and schools in Kenya for a chance to have the United Nations send them to better lives in America.

His better life brought him to Dallas to work as a grocery store bagger and stocking clerk.

"Here in America there is always opportunity but one has to pursue that opportunity," said Malual.

So, he always had a resume in his pocket. And one day he gave the resume to a customer, who turned out to be a nurse at Children's Health.

"A day later she called me, and she said I have a great news for you. Somebody might be contacting you from the children's hospital. So that day everything changed for the good," he said.

He landed a good job as a health unit coordinator, helping schedule patient exams and any other clerical help that nurses and doctors need. He's had the job since 2014.

"I feel blessed to be a part of this organization," he said.

It also gave him a chance to pursue a college degree, something someone in his family had never been able to do. But, as the COVID-19 situation has done so many times, his commencement ceremony at UT Dallas was canceled. He had a decades-long journey to earn that cap and gown but nowhere to wear them.

Malual's coworkers at Children's Health stepped in. They called him to a hospital break room, asking to use his height to get something the nurses couldn't reach.

"When I opened the door, believe me, it was the best party I ever had," he said of the banners, presents and gifts that were waiting for him, along with a party-size mortar board that he could fling into the air.

"They did make my day," he said. "It definitely mean a lot. And it will live in my memory forever."

Malual came from an Ethiopian village with no electricity and no running water. In 2011, he was able to return to help dig a water well for his family and friends.

And now, with a Bachelor's degree in Public Affairs, he hopes to be able to help his family even more.

"Sometimes you have to be patient. Because someday, good things will come when you hold onto something," he said.

And at Children's Health, with the new family of co-workers he has found, he keeps holding on to his American dream.