Chris Tuveng, 53, miraculously survived with only scrapes, cuts, and bruises to his body. 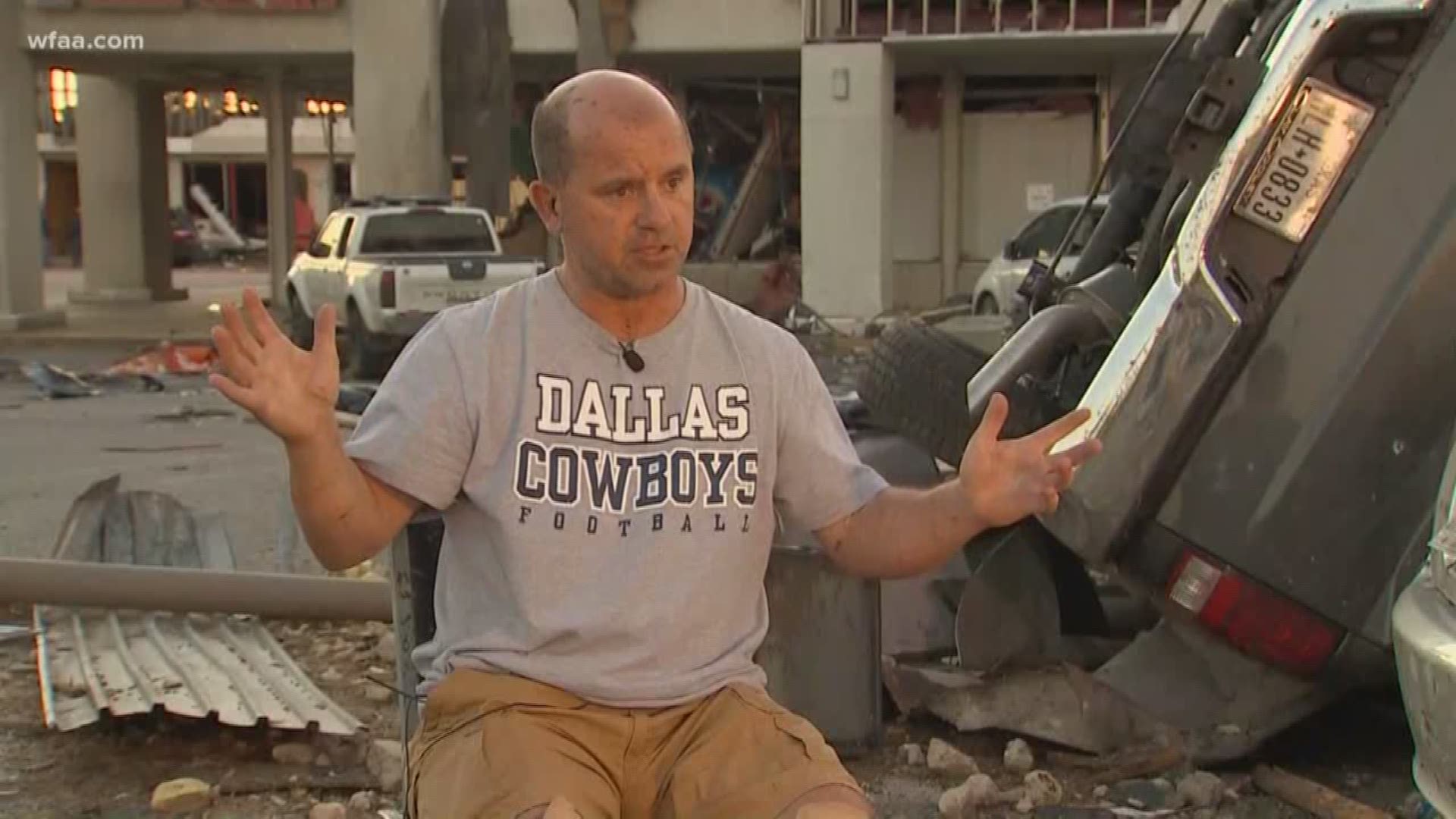 DALLAS, Texas — A Dallas man is counting his blessings and credits God for still being alive after he was sucked out of a store and into Sunday's EF3 tornado that tore through the city.

Chris Tuveng, 53, survived and walked away with multiple scrapes and bruises to his body after being hit with debris.

"To think that I lived through it is...incredible," Tuveng said. "It just crushed me, there was nothing I could do I was helpless."

Tuveng, like most of Dallas, was watching the Sunday night primetime game between the Cowboys and the Eagles with family.

At halftime, the 53-year-old said that he went to the Little Caesars near Walnut Hill and Marsh to get some pizzas.

The store is inside a small shopping center there.

"It was a madhouse because the Cowboys game was on," Tuveng said. But once inside, Tuveng noticed something strange.

"The door kept flying open to the store. I got up to shut it once, but then it flew open again," Tuveng said.

"At that point, I saw clouds and debris flying around outside. I was near the door, and yelled, 'tornado!' "

What happened next, is something out of a nightmare. Tuveng said he was pulled out of the store by the tornado's force.

"The thing sucked me out of the building and into a breezeway," Tuveng said.

Once Tuveng was pulled outside the store, and into the tornado's path, he found a structural pillar in a breezeway of the shopping center and held on for his life.

"I was getting pounded by debris. Whatever was flying through the air just hit me," Tuveng said.

"I was just holding on. I didn't want to get blown away."

Credit: Chris Tuveng
A photo shows what Chris Tuveng's back looked like once the tornado moved on. He was struck by debris while holding onto a building.

Tuveng said that when the storm got worse, he transitioned himself from the pillar to a truck in front of him.

"'I started holding on to the tire, and I grabbed the rim to just hold myself lower to the ground," he said.

Credit: Chris Tuveng
The back of Tuveng's legs which were scraped and bruised by debris.

Once the twister passed, Tuveng said he got up and heard nothing but silence adding that the power was out everywhere.

"It probably only lasted 30 seconds, but it felt like an eternity."

Tuveng said that a friend drove him to Parkland Hospital where he only spent 5 hours before being discharged.

He is one of just 10 people who were injured by the storm, but not seriously hurt.

Credit: Chris Tuveng
A photo of the Little Caesars Tuveng went to. The first pillar on the left is the one he held onto as the tornado passed.

A number in the Dallas community has credited God for protecting so many people and Tuveng agrees.

"If you don't believe in miracles, look at me," Tuveng said. "I would not be here without God's intervention today."