"There has been a collaborative effort, from what I’ve been able to perceive, between the Texas Education Agency, as well as local school districts," Abbott said. 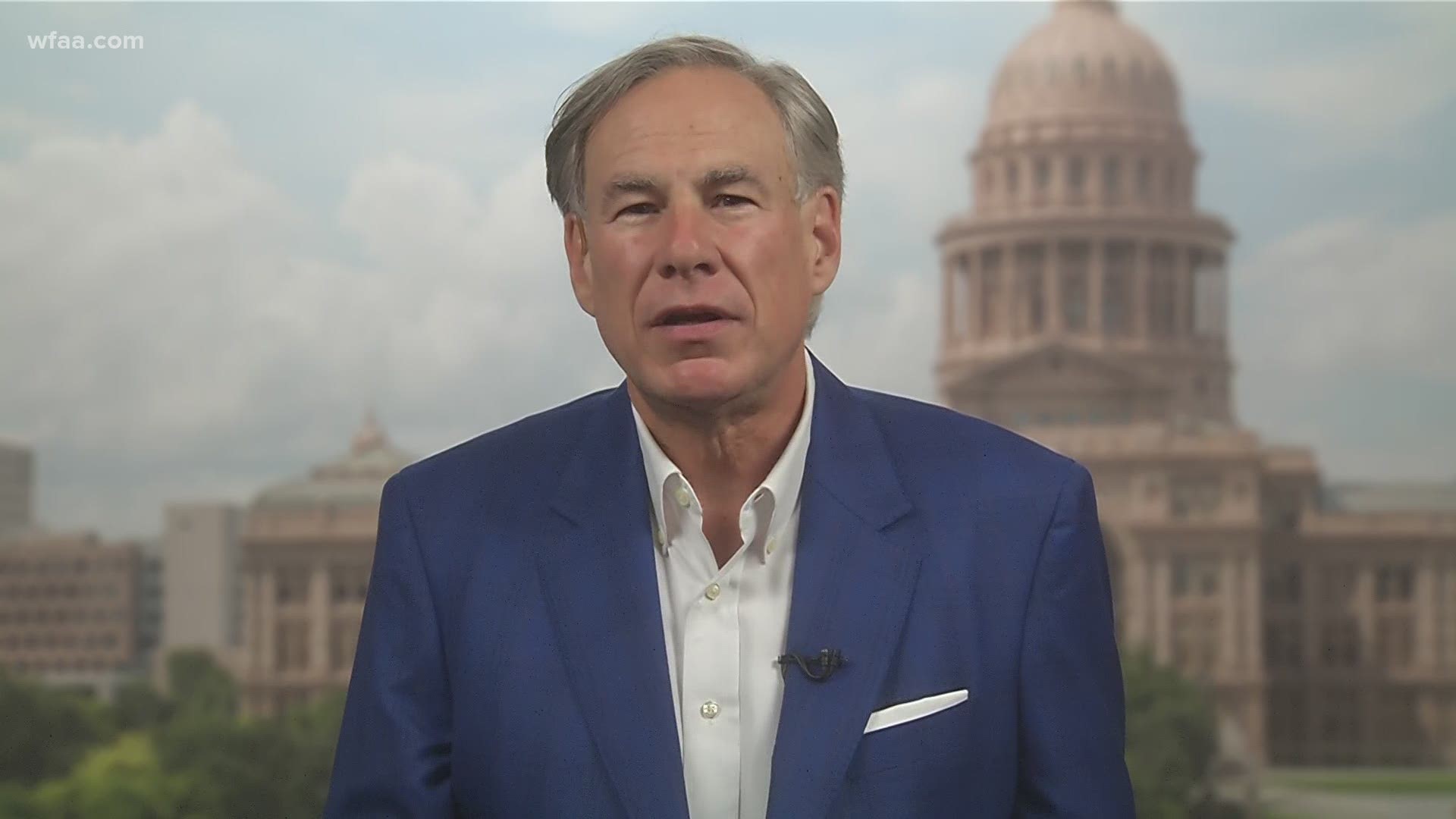 Across the state of Texas, some schools are reopening, and students are returning to the classroom with CDC guidelines in place. But teachers, students and parents remained concerned.

In an interview on WFAA on Friday, Gov. Greg Abbott said the state doesn't plan on pulling school funding, and has more than enough PPE and protocols in place to help slow the spread of COVD-19.

Read on for his full comments, including Abbott said about evictions.

If local governments can’t stop evictions, then what is the state going to do to help the Texans who are struggling and who are behind on their rent payments in this pandemic?

There are perspectives being viewed at different levels as we speak right now, as I’m sure you have heard or maybe reported that the president is thinking about doing something involving evictions, as well as Congress. Previously, the Texas Supreme Court took actions involving evictions. So, as we speak there are multiple agencies that are taking a look at this.

One reason why this is an issue is because of the uncertainty about the package that was going to be passed out of Congress. A lot of people were anticipating this was going to be passed on Monday of this week, which is when it needed to be passed. It still is not yet passed right now. Hence, there are a lot of people left in limbo as we speak. But I do feel confident that one of these agencies at one level will be able to step up and deal with these eviction issues.

Are you going to withhold state funds from a school district if they decide locally that they won’t open campuses for in-person learning in eight weeks?

Schools can open up and make the decision about opening up either this month, or next month. And when they do open up, they have an eight-week time period to provide either on-campus learning, blended learning or remote learning. And then after that eight-week period, they will be able to seek waivers from the TEA to allow them to continue to receive funding pending upon the circumstances at that particular time.

One thing that neither you or I know right now is what will the status of COVID-19 be eight weeks after schools open up, which is actually three months from today.

If we do a good job continuing what is happening in Dallas County of slowing the spread of COVID-19, it could mean that the circumstances are such that schools will be more than eager to have children return to classrooms.

If, however, people let their guard down and COVID spreads even more rapidly, it could mean that many schools if not most schools will continue with remote learning.

Can you commit there will not be a lot of red flags on those waivers? Because the threat has been made to remove state funding, and local school officials – they are afraid of losing that.

Listen, as far as I know, there have been no threats made with regard to school funding. There has been a collaborative effort, from what I’ve been able to perceive, between the Texas Education Agency, as well as local school districts – working to ensure several things.

First and foremost, that the health and safety of students, teachers and parents will be the primary concern. And then second, that school will be able to have the flexibility they need to ensure that students will be educated with everybody agreeing on the concept that if it is at all possible children should be educated in a classroom because that’s a far better setting. But also, understanding that if that is not a safe setting, it wouldn’t be the best setting.

We saw a startling image out of Georgia this week of a pack high school hallway. Even with mask, social distancing wasn’t possible. Is that something parents should expect when kids return to the classroom? What would you tell parents who have concerns?

Well, if it’s the same picture I saw, it was of a packed hallway where no one had masks on. That is actually inconsistent with the protocols that we have in place in Texas.

The protocols we have in Texas differ for one, they do require masks. For another, they are supposed to have people come into the school not all at one time crowding one hallway like I saw in the picture that I saw. But instead, have staggered entries so you do not have packed hallways like that. Those are just some of the safety protocols that schools already have in place.

On some Texas school campuses, teachers and administrators have already tested positive for COVID, even during work weeks preparing for kids. Do you think these new cases on campuses are just a given? And, are you OK with that?

We need to recognize the reality that just like the time before COVID during the flu season that there would be teachers or students who test positive for the flu. There were even some schools that had to shutdown, because the flu got so serious. Until we have adequate therapies and vaccines, we need to recognize the reality that there will be some people testing positive.

But if we use the safe protocols, with regard to masks, with regard to hand sanitizing, with regard to distancing practices… If we do have anybody testing positive, remain at home so they can isolate there as opposed to spreading it to anybody else. There are protocols in place to make sure that we can slow the spread, while educating our students but also while allowing people to go into their jobs, earn a paycheck and put food on the table.

The CDC says if a student test positive for COVID-19, then all students and teachers in the same group should be tested as well, but TEA guidance doesn’t require that. Instead, it tells kids to stay home. Why are we not following CDC guidance requiring and providing testing to students and teachers?

The TEA actually provides flexibility for schools so that the local school districts can make the decision that is right for them based upon the circumstances. It does allow them to, for one, allow the student who tests positive to go home.

But also schools have the flexibility if they so choose to have the entire school shutdown for a time period of five days, where they would use distance learning protocols to make sure that everyone will be learning in a safe environment during the course of time where the school will be sanitized.

So, those are just some of the options that are available in addition to increase testing that will be available to schools.

Do we have enough for the next 6 months?