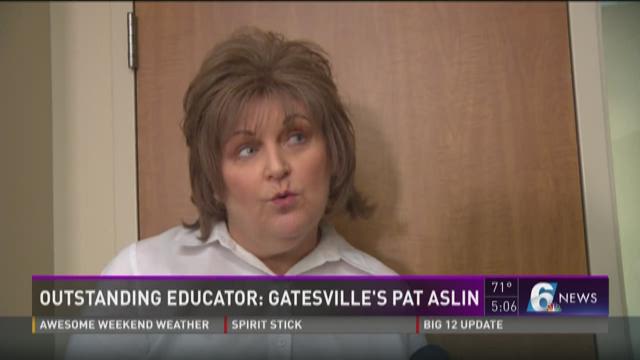 Aslin, a kindergarten teacher at Gatesville Primary School, was nominated by a parent who said she had "the biggest heart you'll ever find." With a southern charm, uplifting smile and a focus on teaching her students manners, Aslin lights up every room she enters.

In April, Pat underwent a routine mammogram and ended up diagnosed with stage three breast caner, which had spread to more than 20 lymph nodes. She began chemotherapy in June and will finish in October before beginning an additional six weeks of daily radiation.

Her husband, Terry, described her as "revered in Gatesville" and called her a selfless encourager.

“We’ve been through the fire together," Terry said. "I wouldn’t change a single day of it to be honest with you. She’s the apple of my eye.”

Superintendent Eric Penrod said Pat's spirit was her greatest asset in the classroom.

"Her kids absolutely love her," Penrod said. "She is a rock in that community and in that school district."

“You just grabbed [cancer] by the horns, and you haven’t changed one bit," Register told Pat. "And, I think you’re stronger for it.”

Representatives from Gatesville ISD joined Pat's husband, son and oncologist Dr. Carl Chakmakjian in surprising Pat after a chemo treatment. Channel 6 News would like to extend a special thank you to Texas Oncology for helping arrange the surprise.

Despite her intense treatment schedule, Pat is spending as many days teaching as possible. She debated stepping away to undergo chemo but was too dedicated to her students to quit her job.

“Childhood is not created equal," Pat said. "Not everyone’s childhood is equal. And, we can be that one person that changes their life."

If you would like to nominate your teacher for the monthly Channel 6 Outstanding Educator, click here and fill out the form at the bottom of the page. The segments are sponsored by the Edible Arrangements located at 2320 S. 31st Street in Temple. Edible arrangements offers gifts to each Outstanding Educator winner.

In light of Pat's story, Channel 6 News would like to reminder views that October is Breast Cancer Awareness Month. Channel 6 News is a proud sponsor of the 2017 Komen Central Texas Race for the Cure, which is happening Saturday from 7 a.m. until around lunchtime. Several Channel 6 News on-air personalities will participate in the event, which will raise money for breast cancer research. Roughly one in every eight American women will develop invasive breast cancer during their lives, according to the most recent available statistics.