Unequal treatment? Baylor senior says her graduation is in jeopardy after 'racial retaliation' from professor

Baylor students protested the university keeping a senior from graduation after she said she received unequal treatment from a professor who failed her and reported her for plagiarism. 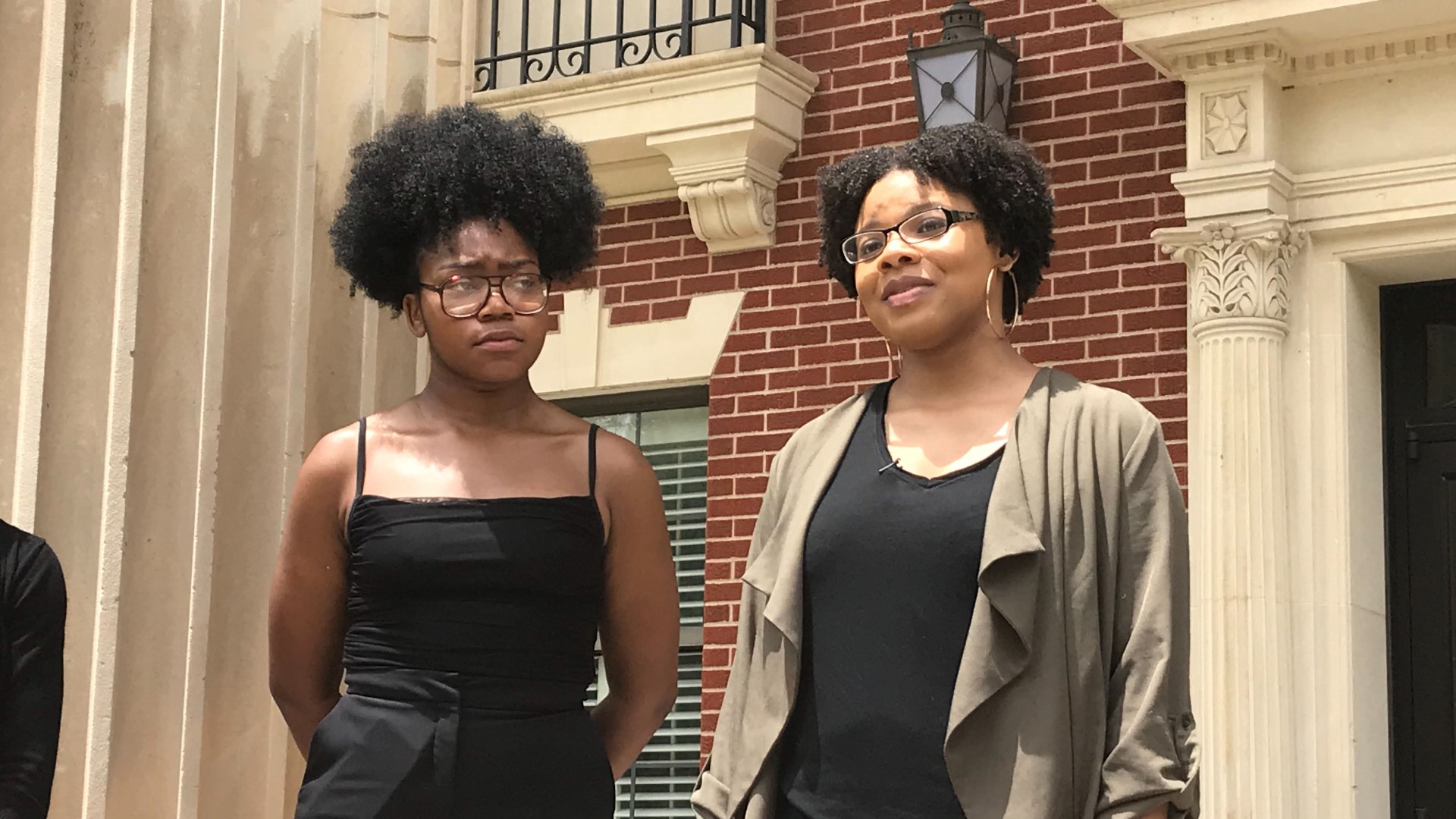 WACO, Texas — Dozens of Baylor students dressed in all black, gathered to protest the university for keeping a senior from graduation after an incident she said was an act of racial retaliation.

Diamond Dominguez was supposed to receive her undergraduate degree in two weeks. She was told she wouldn't be allowed to graduate after Dr. Trey Brown, an environmental science professor at the university, said she plagiarized an extra credit assignment and failed her, according to a video of Dominguez posted to Twitter.

Dominguez said she was the only black student in Brown's class and that he "screamed" at her for eating in class on March 21. In a Facebook post, Dominguez said Brown told the students they were allowed to eat in class.

She later went to his office to discuss the incident, but he refused to speak to her and called police to escort her from the office, according to the video. She said he forced her out of the office and shoved her against the door while her arm was still in the doorway.

A video posted to Facebook appeared to capture audio of the encounter.

She said when she reported the incident to Baylor police, they told her it was not criminal conduct.

Dominguez said she later found out Brown had reported her for plagiarism and failed her. Brown told her he did not fail her for using external sources on an extra credit assignment, as other students did. He told her he failed her because she did not take a photo of a hardwood floor with her own phone according to the video.

After the incident, the University Honor Council met and sided with Brown.

Twitter users rallied behind Dominguez with the hashtag #Pressure4DiamondBU, which was trending in Texas Friday.

Students organized the protest hoping to pressure the university to allow Dominguez to graduate before the commencement ceremony. Dominguez said Baylor's president, Linda Livingstone, is the only one who would be able to reverse the Honor Council's decision.

Dressed in all black, protesters could be heard chanting "What do we want? Pressure for Diamond." 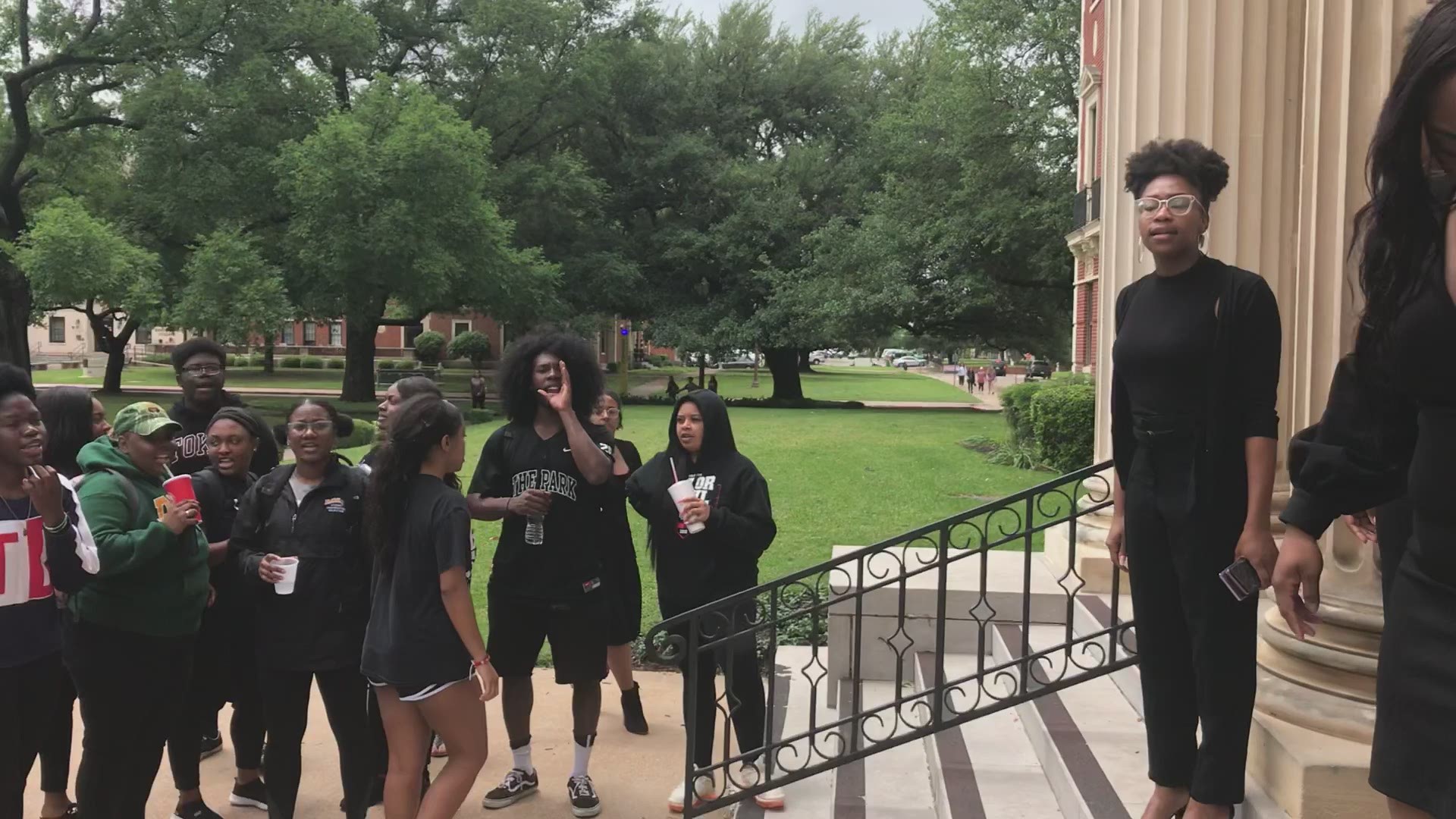 The university responded to the situation on Twitter, citing its processes for accusations involving academic integrity and unequal treatment.

“The University takes seriously any allegations involving academic integrity and unequal treatment. In cases of this nature, the University follows an established process on alleged violations of the Honor Code, hears the facts in each case and makes a decision, which includes an appeals process if students believe the decision of the Honor Council was arbitrary or capricious. Additionally, for allegations of unequal treatment, the University makes resources available to students through both the Equity Office and the Bias Response Team.”

Hanna Seay, a Baylor junior and former student of Brown, tweeted a notarized statement Saturday claiming she remembered eating food in the front row of Brown's class without ever being "given so much as a look of disapproval."

She said she found a copy of an extra credit assignment for the class in which she copy and pasted a "large portion" of a New York Times article about wind energy without quotation marks or citations and was not penalized for academic dishonesty.

Seay, who is white, went on to say "If this university truly believes that Ms. Dominguez is undeserving of graduation due to improper completion of an informal extra credit assignment then I am also, and I ask that this university hold me equally accountable to this apparent standard."

Dominguez said she plans to sit down with Livingstone soon.