Commissioners say the mandate put a burden on businesses and created confusion on how the mandate should be enforced. 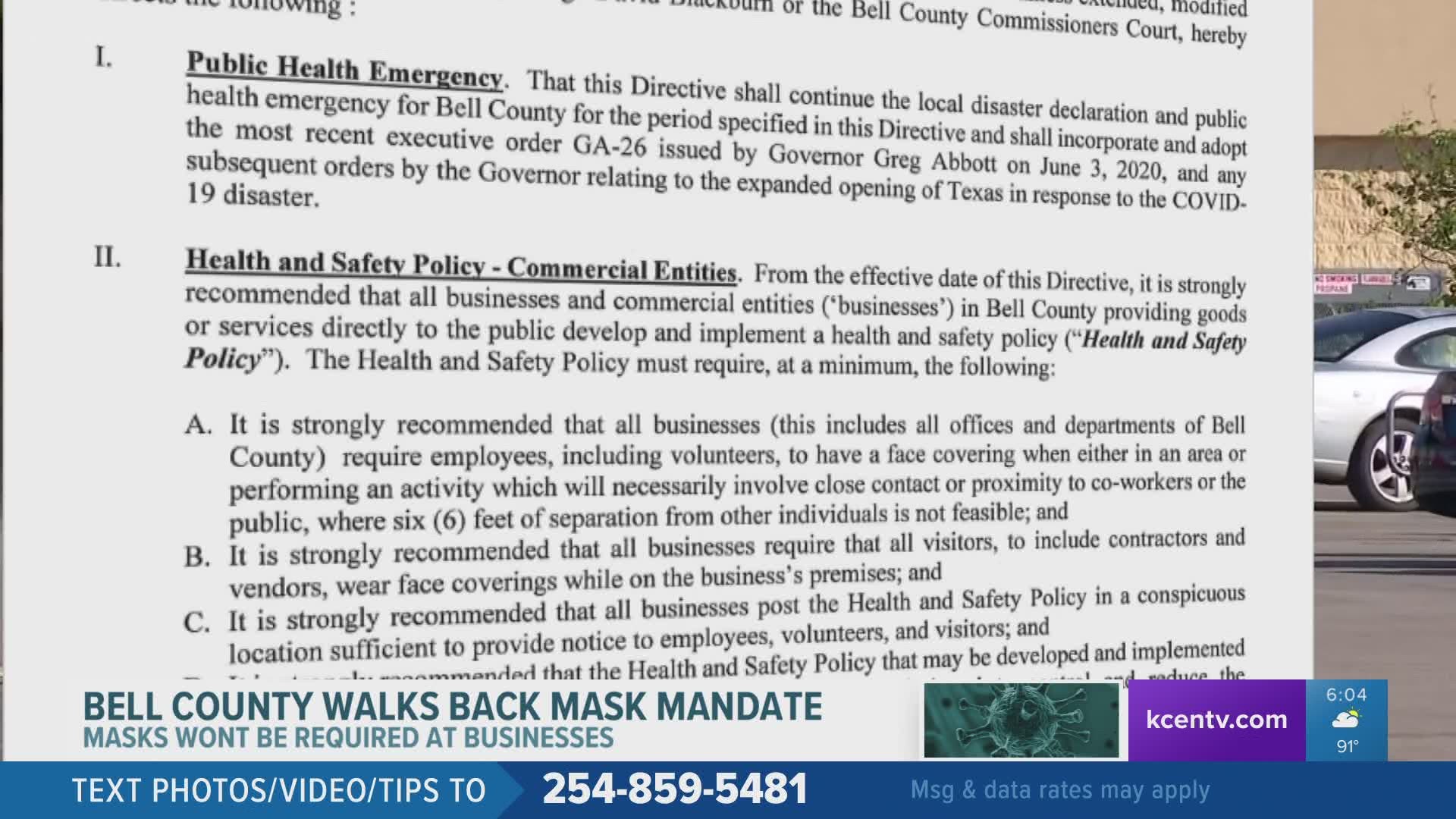 Killeen Mayor Jose Segarra issued an order to mandate the use of face masks in all businesses in the city Wednesday morning. The order will require all employees and customers to wear masks when they cannot be six feet apart.

Bell County Commissioners voted Monday to change the wording of newly-enacted Directive Seven, issued by County Judge David Blackburn last Friday, less than 24 hours after it had gone into effect that required businesses to have all employees and patrons wear masks.

That directive was quickly amended to Directive Eight by Monday afternoon to say "it is strongly recommended" that business require masks because several commissioners said Monday it was not clear how businesses would deal with customers who refused to wear a mask.

"If someone comes in your establishment and doesn't want to wear a mask...at some point they would have to call a law enforcement agency and I hope the business owner wouldn't think they have to drag that person out of the business," Commissioner Russell Schneider said.

"I think it’s burdensome and confusing to mandate businesses to have to be the police on this deal,” Commissioner Bobby Whitson said.

Bell County Judge David Blackburn told commissioners Monday morning that all hospital representatives in the area have recommended face coverings. He worried that failure to act would mean even greater consequences down the road.

"I recognize that this is somewhat intrusive on our businesses, but it's far less intrusive than closing the business," Blackburn said. "I would much rather manage this as best we can locally than have the state manage it on a statewide level."

The commissioners later voted to remove the mandate and any enforcement penalty on Monday.

When Commissioner Russell Schneider spoke with 6 News Tuesday, however, it turns out the current language could be reconsidered. When 6 News asked if there was a middle ground where masks would only be required of employees, Schneider said they still have more options to look at and his is welcoming the public to reach out.

"That's another item to consider, making sure employees wear the masks and not the patron. That's a good idea," Schneider said. "I'm sure it will be on our agenda Monday again and all the phone calls and emails I've got I try to talk to them individually. I really want to hear ideas on best enforcement."

Schneider said they would be evaluating the measures they are taking daily and it could be changed at a later time.

Even if Bell County does not make the working more strict, local cities could still create their own orders on the matter. Temple Mayor Tim Davis told 6 News he is still following the County's lead at this time, though that may change. Killeen Mayor Jose Segarra told 6 News their would be a Wednesday press conference related to the issue.

Meanwhile in McLennan County, County Judge Scott Felton also signed an order Tuesday that also "strongly recommended" businesses develop a health and safety policy requiring everyone in the business to wear a mask. The order did not override any stricter policy that Waco and other McLennan County cities have already adopted.

RELATED: HEB to require masks for customers in cities with no mandate