President Biden pays tribute to over 500,000 lives lost to COVID-19

President Joe Biden called on Americans to remember those lost to COVID-19 and to remain vigilant against the virus. 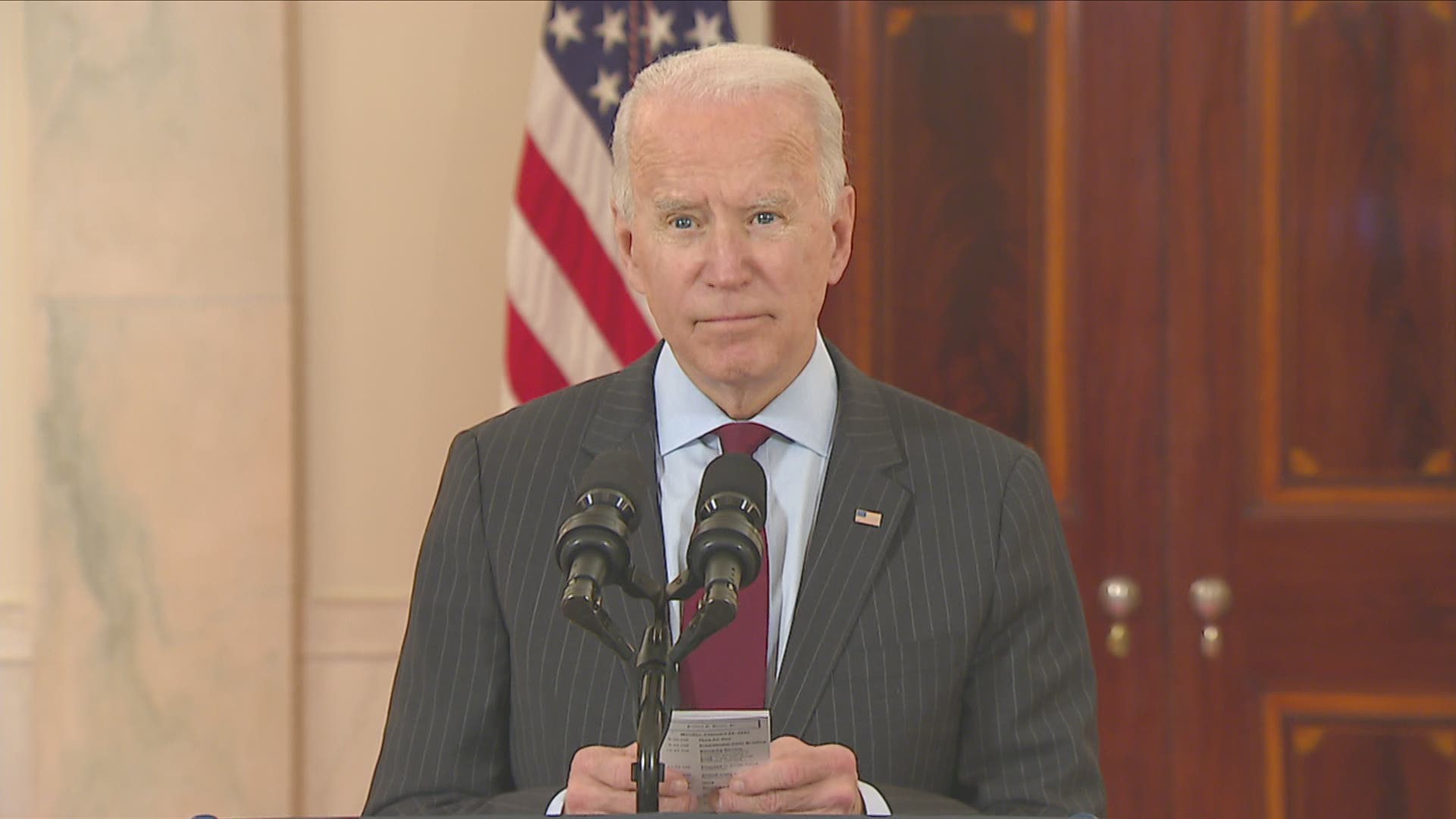 WASHINGTON — With sunset remarks and a national moment of silence, President Joe Biden called on all Americans to remember the over 500,000 lives lost to COVID-19 and to remain vigilant against the virus.

It was a head-on acknowledgement of the country's once-unimaginable loss — half a million Americans in the COVID-19 pandemic — in striking contrast to the approach of his predecessor.

"The people we lost were extraordinary," Biden said. "They span generations -- born in America, immigrated to America...But just like that, so many of them took their final breath alone in America."

Confronting the grim milestone directly and publicly, Biden tried to strike a balance between gravity and hope, while Donald Trump generally avoided constructs of collective grief for the deaths on his watch.

Monday's bleak threshold was playing out against contradictory crosscurrents: an encouraging drop in coronavirus cases and worries about the spread of more contagious variants. 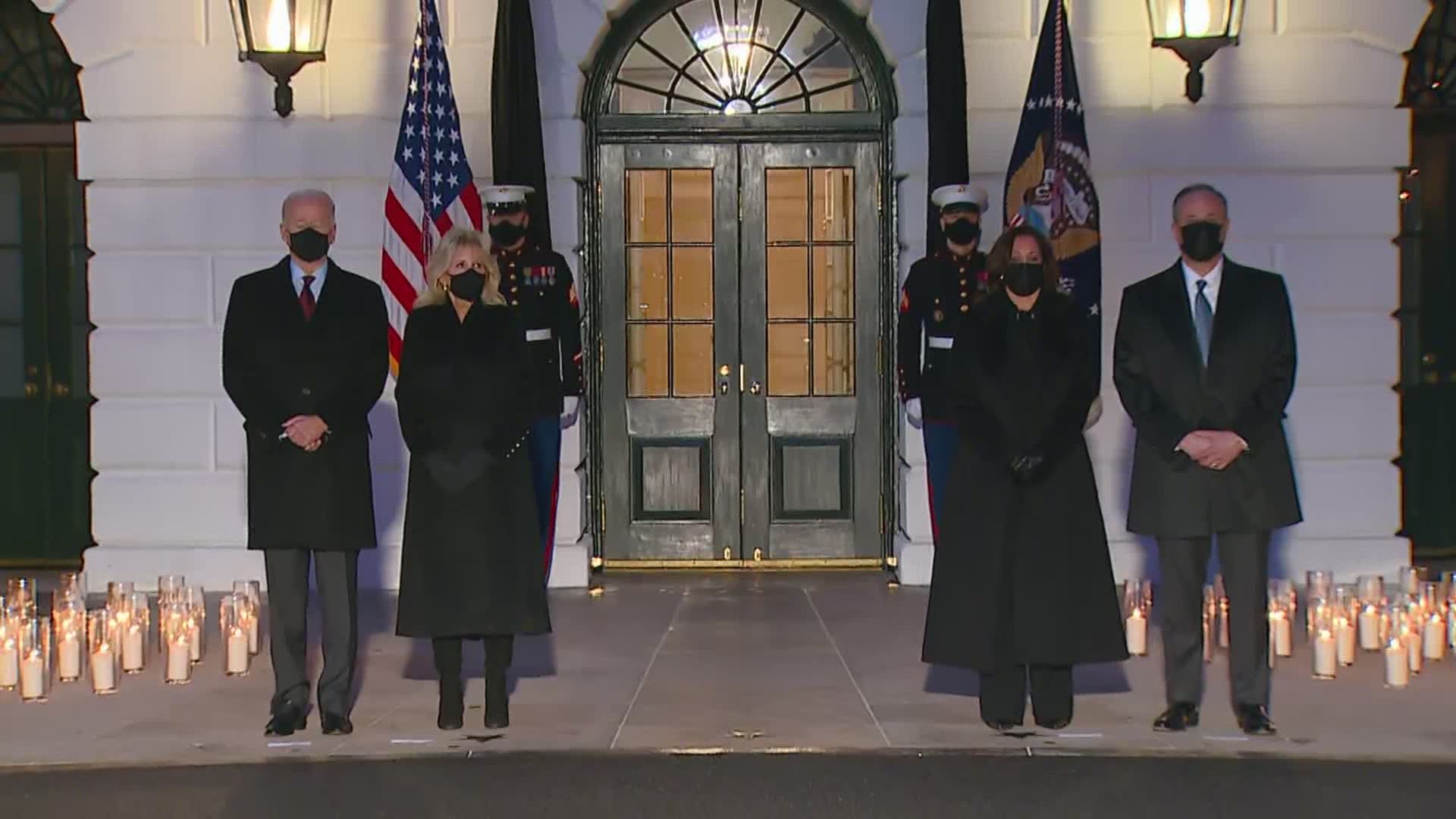 RELATED: US on verge of coronavirus vaccine breakthrough as manufacturing ramps up

A president whose own life has been marked by family tragedy, Biden ordered flags on federal property lowered to half staff for five days as he prepared to lead a moment of communal mourning for those lost to a virus that often prevents people from gathering to remember their loved ones.

Biden also touched on the personal tragedy he’s experienced in losing his first wife and baby daughter in a car collision, and later losing an adult son to brain cancer.

Biden told the nation’s he knows it’s hard but that “to heal, we must remember.”

Biden's management of the pandemic will surely define at least the first year of his presidency, and his response has showcased the inherent tension between preparing the nation for dark weeks ahead while also offering optimism about pushing out vaccines that could, eventually, bring the pandemic to a close.

“I believe we’ll be approaching normalcy by the end of this year. And God willing, this Christmas will be different than the last,” Biden said Friday while touring a Pfizer vaccine manufacturing plant in Michigan.

“But I can’t make that commitment to you," he was quick to add. "There are other strains of the virus. We don’t know what could happen in terms of production rates. Things can change,” Biden continued. “But we’re doing everything the science has indicated we should do, and people are stepping up to get everything done that has to be done.”

Biden, first lady Jill Biden, Vice President Kamala Harris and her husband Doug Emhoff were to lead a national moment of silence at sundown from the White House. They were to light a candle to mark the half-million deaths. White House press secretary Jen Psaki called the ceremony “a human moment.”

“The president felt it was important to mark the lives lost over the past year and that’s the purpose of tonight,” Psaki said during an afternoon press briefing. “Tonight is not the night to give advice to the public or give an update on progress being made.”

The milestone comes just over a year after the first confirmed U.S. fatality from the coronavirus. The pandemic has since swept across the world and the U.S., stressing the nation's health care system, rattling its economy and rewriting the rules of everyday society.

In one of his many symbolic breaks with Trump, Biden has not shied away from offering remembrances for the lives lost to the virus. His first stop after arriving in Washington on the eve of his inauguration was to attend a twilight ceremony at the Lincoln Memorial Reflecting Pool to mourn the dead.

“For many months we have grieved by ourselves,” Harris said then. “Tonight, we grieve and begin healing together.”

That somber moment on the eve of Biden’s inauguration — typically a celebratory time when America marks the democratic tradition of a peaceful transfer of power — was a measure of the enormity of loss for the nation.

The COVID-19 death total in the United States had just crossed 400,000 when Biden took the oath of office. An additional 100,000 have died in the past month.

Trump invariably looked to play down the total, initially claiming the virus would go away on its own and later locking into a prediction that America would suffer far fewer than 100,000 deaths. Once the total eclipsed that mark, Trump shifted gears again and said that scale of loss was actually a success story because it could have been much worse.

Outside of perfunctory tweets marking the milestones of 100,000 and 200,000 deaths, Trump oversaw no moment of national mourning, no memorial service. At the Republican National Convention, he made no mention of the suffering, leaving that to first lady Melania Trump.

And at campaign rallies across the nation, he erroneously predicted that the nation was “rounding the corner” on the virus while he disregarded safety measures such as masks and pushed governors to lift restrictions against public health advice. In audio tapes released last fall, it was revealed that Trump told journalist Bob Woodward in March that “I wanted to always play it down. I still like playing it down because I don’t want to create a panic.”

Biden, by contrast, has long drawn on personal tragedy — his first wife and two of their children have preceded him in death — as he comforts those who grieve. He has pledged to level with the American public on the severity of the crisis and has repeatedly warned that the nation was going through a “very dark winter,” one now challenged by the arrival of more contagious virus variants.

Biden also has deliberately set expectations low — particularly on vaccinations and when the nation can return to normal — knowing he could land a political win by exceeding them. He is on track to far exceed his initial promise to deliver 100 million vaccinations in his first 100 days, with some public health experts now urging him to set a far more ambitious goal. The administration says it expects to have enough vaccine available for every American by the end of July.

Biden's reference to next Christmas for a possible return to normalcy raised eyebrows across a pandemic-weary nation and seemed less optimistic than projections made by others in his own administration, including Dr. Anthony Fauci, who has suggested a summer comeback.