AUSTIN, Texas — Editor's note: This blog is no longer active. For the latest updates, check out our new live blog here.

KVUE is keeping you updated with the latest coronavirus, also known as COVID-19, news in the Austin area.

Scroll down for the top headlines and latest updates in KVUE's May 18 live blog.

6 p.m. – Travis County coronavirus cases increase by 78, while deaths increase by two. As of May 18, 2,537 cases have been confirmed, 79 deaths have been reported, and 892 people have recovered.

The jail's population is currently 1,759. Twenty-two inmates are currently in quarantine and 212 are in isolation.

5:05 p.m. – As of May 18, the Hays County Local Health Department confirms there are 80 active lab-confirmed cases of COVID-19.

Since Hays County first started providing numbers, a total of 235 lab-confirmed cases have been reported, including three deaths, a woman in her 80s who had been living in Buda with a relative, a Wimberley resident in their 90s and a San Marcos resident in their 60s.

As of May 18, the Hays County Local Health Department has received 2,185 negative test results.

4 p.m. – Zero new deaths were reported in the 12-county Austin area for the second straight day, holding steady at 103. New cases statewide were under 1,000 again after a big fall off from Saturday. And hospitalizations rose slightly, but the seven-day positivity rate average continues to sit below 5% and is at a new low at 4.47%. 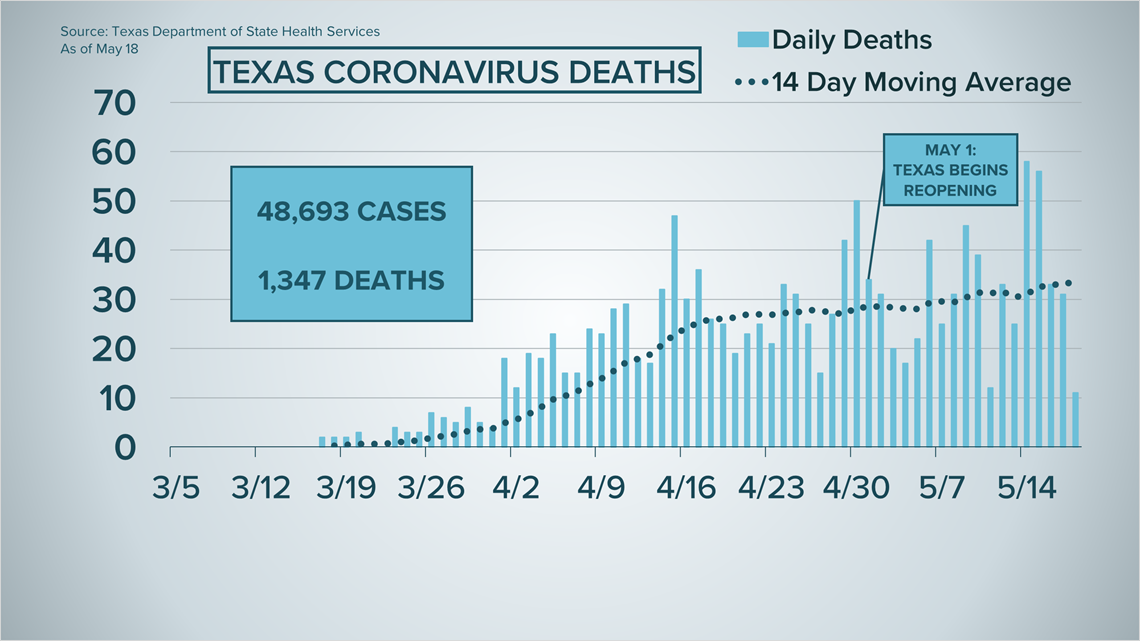 2 p.m. – Gov. Greg Abbott gave an update regarding his plan to reopen Texas. Abbott said he is prepared to move Texas into Phase 2 of opening the state for business. Click here for more details on the announcement.

12:30 p.m. – Capital Metro confirms another employee, who works at the 2910 E. Fifth St. facility, has tested positive for COVID-19. So far, at least 12 employees, including nine bus drivers, have tested positive. One death has been reported.

“Workers at Austin worksites were among the last to pause work and the first asked to return, putting themselves on the front lines and taking risks as our economic first responders. Workers should have the tools to maintain a safe workplace,” said Mayor Steve Adler. "Thank you to Jonathan Coon, the Austin Emergency Supply Foundation, the Consul General, and The Society of St. Vincent de Paul Diocesan Council of Austin for helping to get more face coverings to workers on construction sites.”

10:30 a.m. – The YMCA of Austin will give away 20-pound boxes of fresh produce for free every week, as part of a partnership with Brighter Bites and DiMare Fresh.

The program starts Tuesday and will happen every Tuesday through August. The drive-through or walk-up pickup begins at 9 a.m. at the North Austin YMCA on Rundberg Lane and at 10 a.m. in East Austin on Ed Bluestein Drive. The events will continue while supplies last.

9:20 a.m. – Some Austin City Council members are calling on Gov. Abbott to do more to help Texas Latinos during the pandemic. Councilmembers Greg Casar, Natasha Harper-Madison, Sabino Renteria and Mayor Pro-Tem Delia Garza sent a letter to the governor saying Latinos make up 64% of the COVID-19 hospitalizations in Austin, despite only making up 35% of the overall population.

They also say some state laws keep Latinos from seeking care, so they want the governor to do things like expand Medicaid, let cities adopt paid sick leave policies and get rid of immigration check laws so people can get medical help. Abbott hasn't responded to the letter, which you can read below: 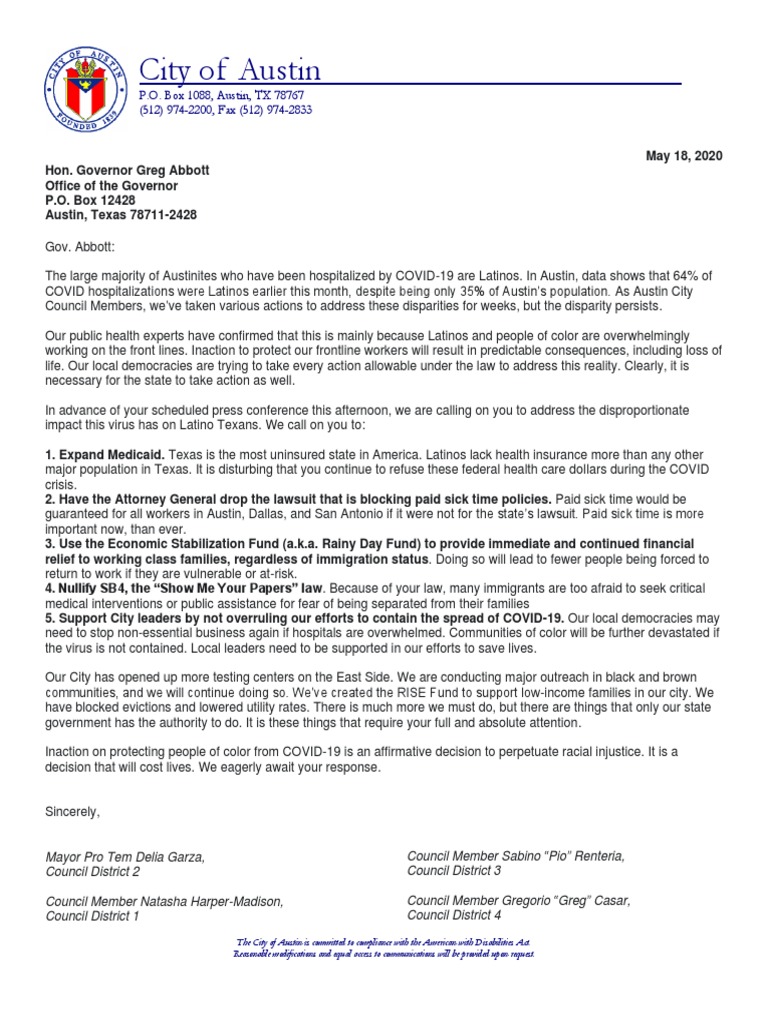 6 a.m. – Gov. Abbott will hold a press conference at 2 p.m. to give an update on reopening Texas.