A federal report finds 3 out of 4 U.S. hospitals surveyed are already treating patients with confirmed or suspected COVID-19. 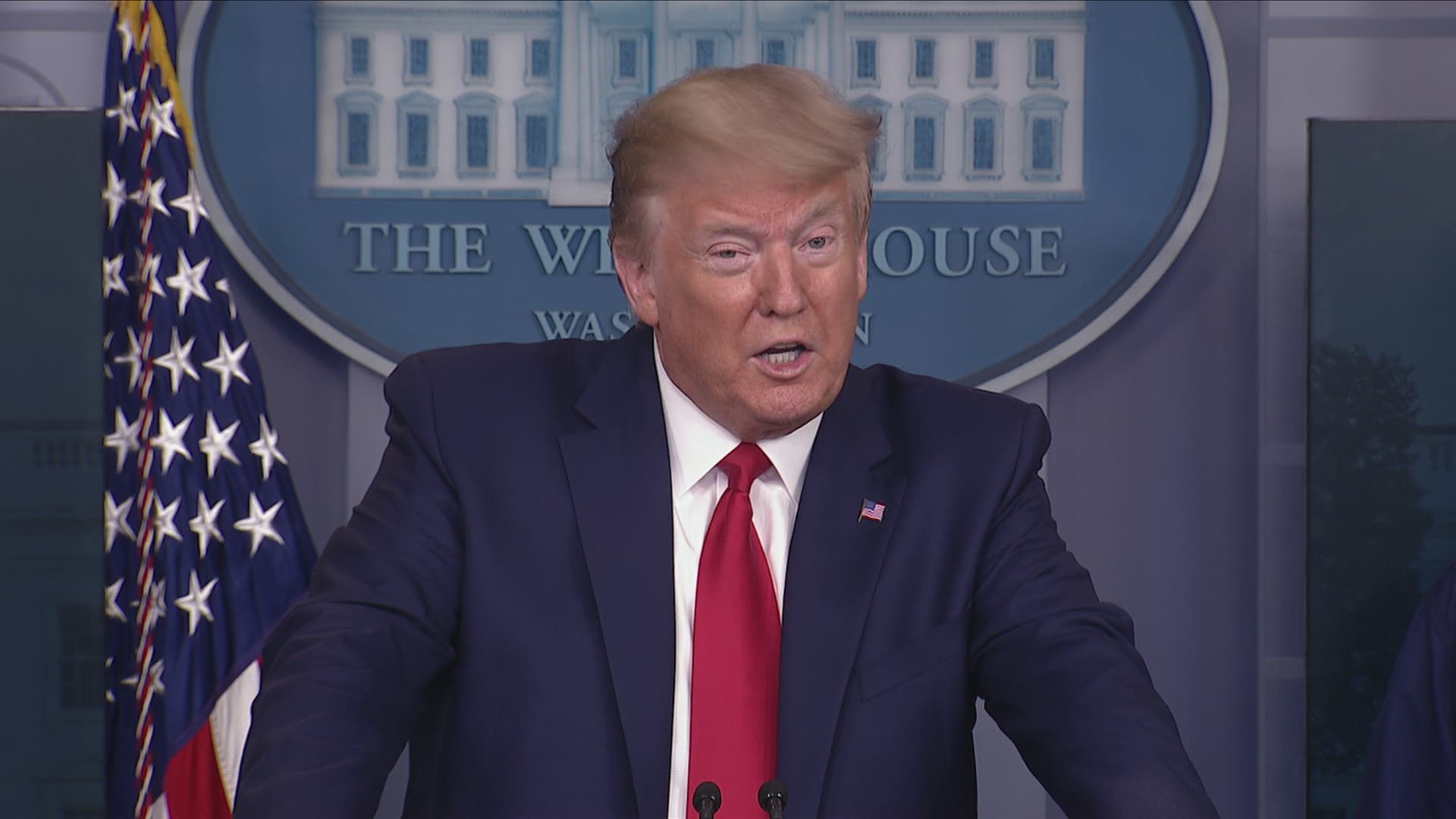 Live updates continue on Tuesday, April 7, at this link

The confirmed number of COVID-19 cases in the United States has reached 337,620 as of midnight ET Monday morning, according to Johns Hopkins University. That's more than double the cases of the next-closest country, Spain. There have been 9,643 deaths in the U.S. -- nearly 1/3 of which are in New York City -- and 17,530 people recovered.

For most people, coronavirus causes mild or moderate symptoms, such as fever and cough, that clear up in two to three weeks. For some, especially older adults and people with existing health problems, it can cause more severe illness, including pneumonia and death.

The USNS Comfort is now being used for COVID-19 patients

“We’re going to let him do it,” said Trump, adding that the ship will will be used for patients from both New York and New Jersey.

“Hopefully that will be very helpful for both states,” he said.

Cuomo had tweeted shortly before Trump’s news conference began that the ship would add 1,000 beds staffed by federal personnel.

“This will provide much-needed relief to our over stressed hospital systems,” he wrote.

The row was over how to supply millions of masks to medical professionals on the front lines of the fight against the coronavirus.

The president said that the company agreed to deliver an additional “55.5 million high-quality facemasks each month.”

It had sparked some fears that other nations would down on the shipment of medical supplies to the US.

Monday the White House scheduled a press conference to update the U.S. as faint glimmers of hope appear as deaths from the new coronavirus in New York appear to be leveling off.

The president said that the Army Corps of Engineers is constructing 22 field hospitals, and more than 8,000 ventilators have been sent from the Federal stockpile. Apple is said to be creating face shields at the rate of 1 million per week, according to President Trump.

Trump said that the state of California will send 500 excess ventilators from their state, to various other states in need around in U.S. The president thanked California Gov. Gavin Newsom.

New York Gov. Andrew Cuomo warned it's too early to relax restrictions on social distancing but says the apparent slowdown in deaths is a possible sign that social distancing is working in the most lethal hot spot in the U.S., a trend that seems to be taking hold as well in hard-hit Italy and Spain.

And New York City, the epicenter of the pandemic in the U.S., as well as New Orleans and Detroit still face worrying days ahead even as President Donald Trump and Vice President Mike Pence are striking optimistic tones, insisting the hard weeks to come will ultimately give way to the nation turning a corner. 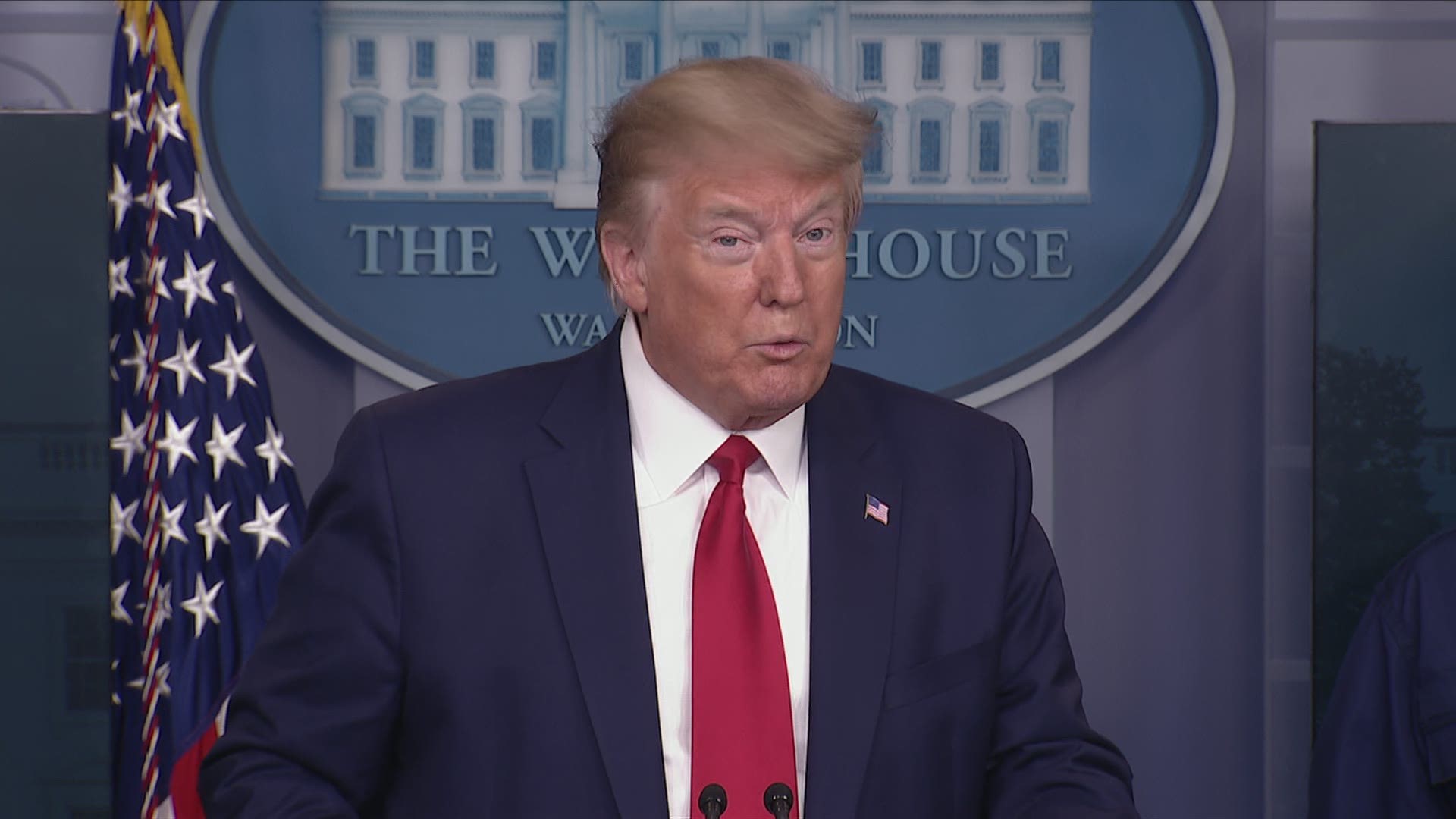 British Prime Minister Boris Johnson has been moved to the intensive care unit of a London hospital after his coronavirus symptoms "worsened."

Johnson was admitted to St. Thomas’ Hospital late Sunday, 10 days after he was diagnosed with COVID-19.

“Over the course of this afternoon, the condition of the Prime Minister has worsened and, on the advice of his medical team, he has been moved to the Intensive Care Unit at the hospital,” his office said in a statement.

It said Johnson has asked Foreign Secretary Dominic Raab to deputize for him.

The NFL draft will officially be virtual this year, with general managers and head coaches drafting from their homes.

In a statement, Fred Ridley, Chairman of August National Golf Club, said they hope the "anticipation of staging the Masters Tournament in the fall brings a moment of joy to the Augusta community and all those who love the sport."

But Ridley emphasized that the plans for the Masters Tournament will be reliant on direction from health officials.

The British Open will not be played this year for the first time since 1945, with the R&A choosing to play golf's oldest championship next year at Royal St. George's and move the 150th Open at St. Andrews to 2022.

It was a major piece of golf trying to reconfigure a schedule brought on by the spread of the new coronavirus.

Golf organizations were expected to announced later Monday the PGA Championship moving to August, the U.S. Open going to September and the Masters to be played in November, two week before Thanksgiving.

All that depends on guidance from government and health authorities.

Britain Prime Minister Boris Johnson was at one point reportedly said to be in good spirits following his first night in the hospital for what his office described as a “precautionary step” after contracting the new coronavirus.

As of Monday afternoon, Johnson is still in charge of the government despite being sent to St Thomas’ Hospital after COVID-19 symptoms of a cough and fever persisted. His spokesman James Slack said he would remain in the hospital under observation.

The 55-year-old leader had been quarantined in his Downing Street residence since being diagnosed with COVID-19 on March 26. He is the first known head of government to fall ill with the virus.

He has released several video messages during his 10 days in isolation.

US hospitals expect to be overwhelmed as peak approaches

A federal report finds 3 out of 4 U.S. hospitals surveyed are already treating patients with confirmed or suspected COVID-19.

The report from the Health and Human Services inspector general's office is due out Monday. It finds hospitals across the nation expect to be overwhelmed as U.S. coronavirus cases rocket toward their anticipated peak by mid-April.

Investigators say the key insight is individual problems such as lagging testing, supply shortages and burned-out staff are feeding off each other, creating a vicious cycle.

The federal watchdog agency is worried that could create a “domino effect” that overwhelms some hospitals.

Japan PM to declare state of emergency for Tokyo

Japanese Prime Minister Shinzo Abe says that he will declare a state of emergency for Tokyo and six other prefectures as early as Tuesday to bolster measures to fight the coronavirus outbreak, but that there will be no hard lockdowns.

Abe also told reporters Monday that his government will launch a 108 trillion yen ($1 trillion) economic stimulus package to help counter the economic impact of the pandemic, including cash payouts to households in need and support to protect businesses and jobs.

Abe said experts on a government-commissioned task force urged him to get a state of emergency ready as the COVID-19 outbreak is rapidly expanding in major cities including Tokyo. He said the state of emergency will cover Tokyo, Osaka, Fukuoka and four other hard-hit prefectures, and will be in effect for about a month.

The state of emergency comes less than two weeks after International Olympic Committee announced the 2020 Olympics in Tokyo would be postponed to 2021.

Britain’s Prime Minister Boris Johnson remains in charge of the government despite being hospitalized in what his office described as a “precautionary step,” after contracting the new coronavirus.

Housing and Communities Secretary Robert Jenrick told BBC that Johnson is awaiting the results of tests after spending the night in an undisclosed hospital.

Jenrick says that he’s “sure this is very frustrating for him,’’ but that “nonetheless he’s still very much in charge.’’ Jenrick did not rule out a more prolonged stay.

The 55-year-old leader had been quarantined in his Downing St. residence since being diagnosed with COVID-19 on March 26 — the first known head of government to fall ill with the virus.

He has continued to preside at daily meetings on the outbreak and has released several video messages during his 10 days in isolation.

Hilton and American Express are donating a million U.S. hotel rooms to medical workers who need to sleep or isolate from their families.

American Express and Hilton are paying for the rooms, which are being provided at or below cost by Hilton franchisees. Hilton will offer the rooms through 10 professional organizations, including the American Hospital Association and the National Association of Emergency Medical Technicians.

Norway is sending an emergency medical team to Italy’s Lombardy region that it says is in desperate need of health-care staff due to the coronavirus emergency.

The Norwegian government said it was replying to the request of the Lombardy region initially made at the end of March.

The medical team is “self-sufficient” and will remain in Italy for four weeks, the government said.

Buying groceries online — which many Americans are doing to drastically reduce how often they leave their homes — is only open to Supplemental Nutrition Assistance Program (SNAP) recipients in six U.S. states.

Now, state governments and food security activists across the country are imploring the U.S. Department of Agriculture to make the program more flexible and easier to access at a time when so many people are losing their jobs and turning to the government for support.

The calls have even come from conservative states where lawmakers have tried to reduce or limit food aid.

"Perhaps I am a particularly robust 59 year old - I like to think I am - or was blessed with getting only a mild case of Covid 19 - but after a week or so of what I would describe as a 'Turbo-charged Flu', I came out of it feeling okay- although I must admit I didn't mind the quarantine as it gave me the chance to really recover," Taylor wrote.

Fourteen people from a cruise ship that docked in Florida over the weekend with coronavirus victims aboard were hospitalized and one of them later died, authorities said Sunday. Two fatalities had been reported previously aboard the Coral Princess.

The Princess Cruises ship, which docked Saturday in Miami, also began disembarking on Sunday fit passengers who were cleared for charter flights out. Passengers with symptoms of COVID-19 or recovering from it were being kept on the ship until medically cleared.

The statement did not immediately indicate whether the 14 people had a confirmed coronavirus link.

RELATED: Another cruise ship with virus victims docks in Florida

Washington Gov. Jay Inslee said the state will return more than 400 ventilators of the 500 it has received from the federal government so they can go to New York and other states hit harder by the coronavirus.

The Democratic governor said Sunday that his statewide stay-at-home order and weeks of social distancing have led to slower rates of infections and deaths in Washington.

Washington state has 7,666 confirmed cases of the virus and 322 deaths, according to a Johns Hopkins University tally on Sunday afternoon. New York has more than 122,000 confirmed cases and more than 4,000 deaths.

Just days after recommending that people wear masks to prevent the spread of the coronavirus, a county in Southern California went a step further and ordered all residents to cover their faces when leaving home as the number of infections and deaths continued to rise across California.

Dr. Cameron Kaiser, the top health officer in Riverside County, said “not everybody's getting the message” about social distancing while in public, so officials were forced to "change from saying that you should to saying that you must.”

The order issued over the weekend also prohibits all gatherings except for family members living in the same home, and police would enforce the regulations “as they deem necessary,” a county statement said. Nineteen people have died of COVID-19 in the county. On Sunday, officials reported that 30 people at a skilled nursing facility in Riverside have tested positive for the coronavirus.

RELATED: To mask up or not to mask up?