While more people are being tested for COVID-19 in Tennessee, more results are coming back positive. Hospitalizations and deaths are increasing too. 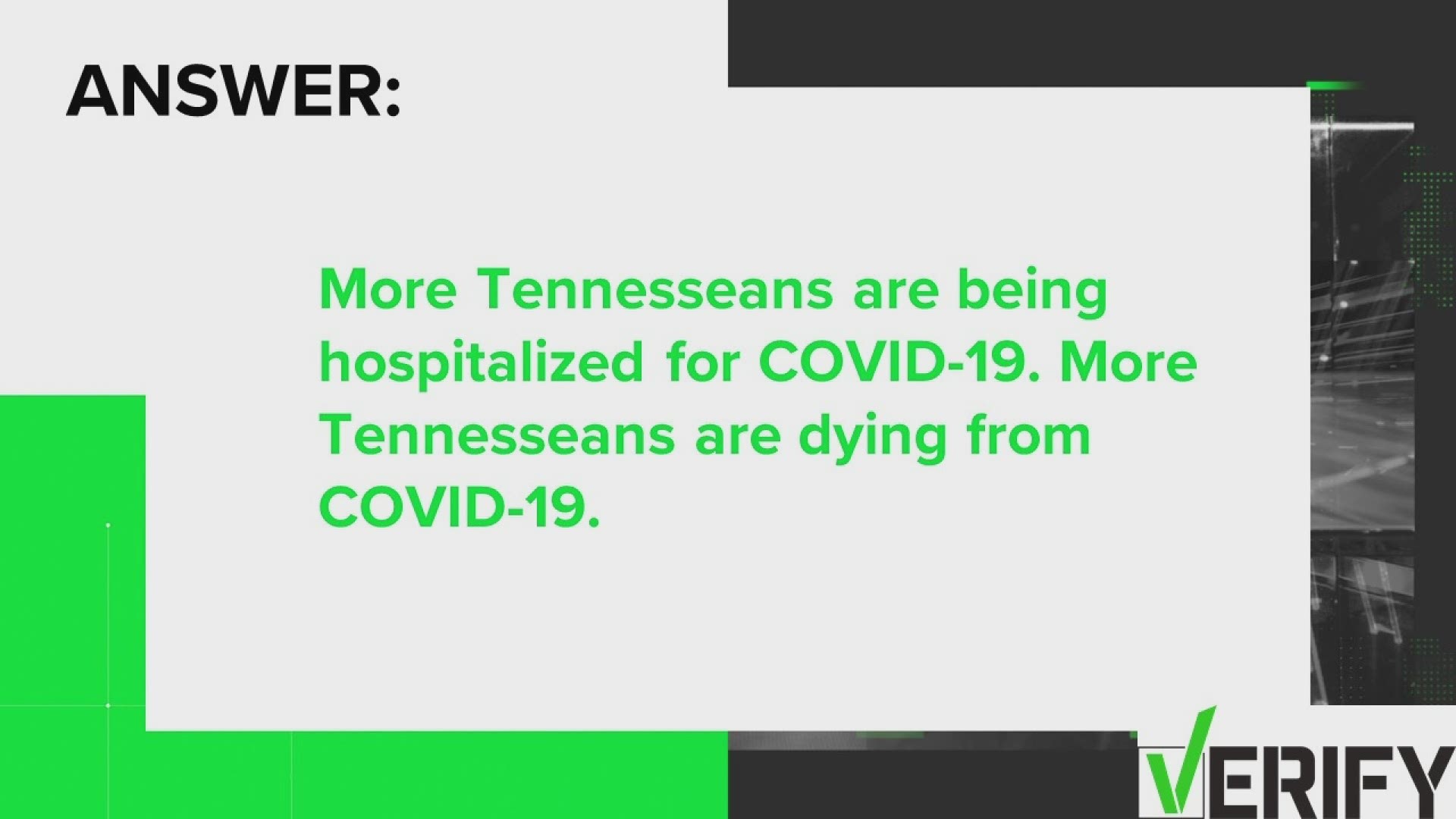 KNOX COUNTY, Tenn. — QUESTION: In the big picture, are hospitalizations and deaths dropping?

Let's start with hospitalizations: in early April, the TDH was reporting about 30 new hospitalizations a day. That number peaked around 45 in early May and then declined for a couple of weeks.

But since early June, it's trended up. As of July 21, the seven-day average showed about 60 new hospitalizations a day — double the number TDH was reporting in early April.

Credit: TDH
New daily hospitalizations are trending up in Tennessee.

As for deaths, Tennessee has mainly averaged between 4 and 7 deaths a day until recently. In mid-June, the daily average rose to about 8 or 9 deaths. Now, it's closer to 13 or 14 deaths a day.

While the percent of individuals with COVID-19 requiring hospitalization or dying has declined, the actual number of people being hospitalized or dying from COVID-19 is going up. 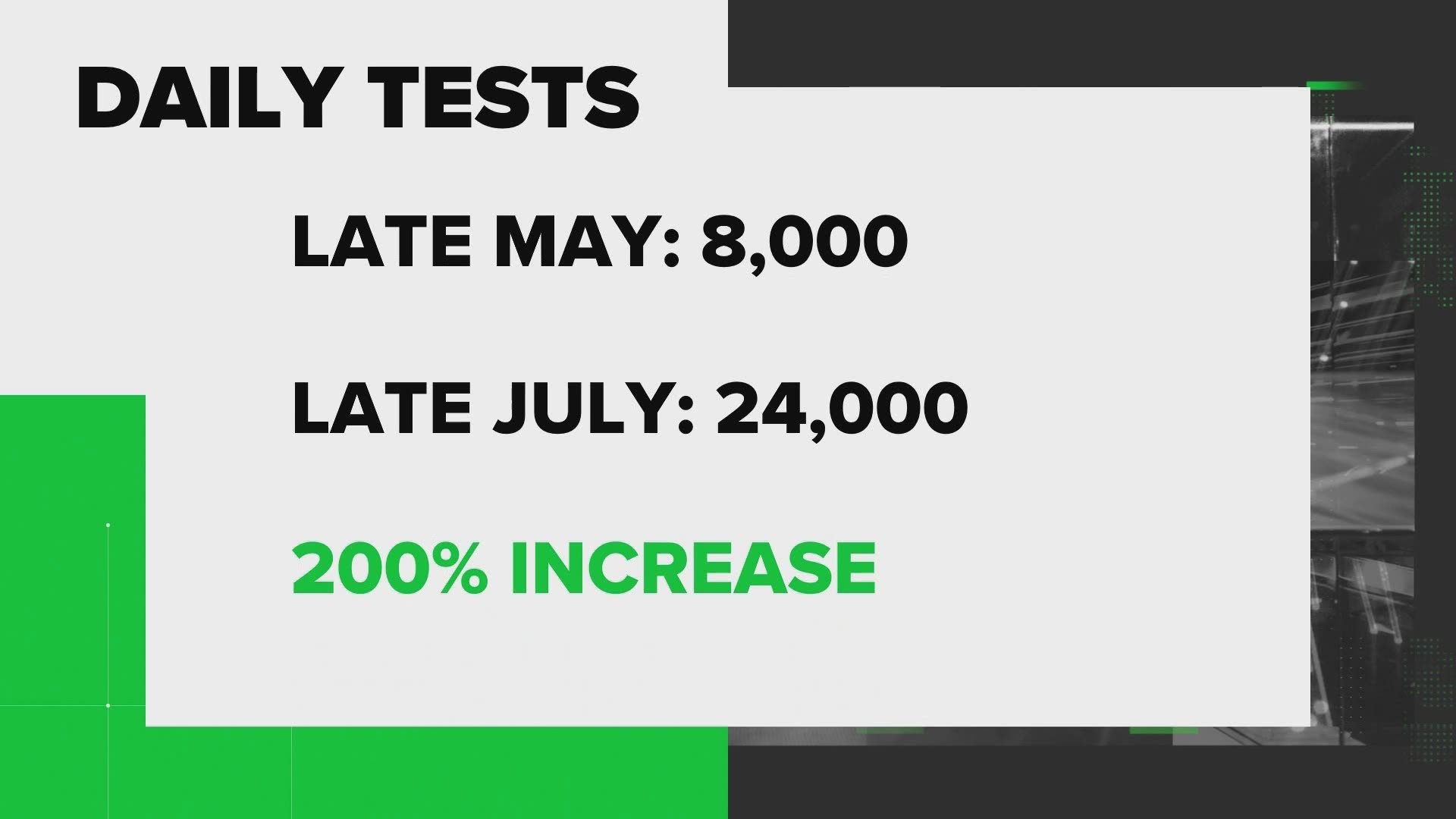 QUESTION: Is increased testing responsible for the rise in cases?

VERIFY: No, more testing does not necessarily mean more cases.

For this question, we went to the Tennessee Department of Health and the New York City Health Department, both of which track COVID-19 testing and positives for their respective areas.

Now let's look at positives. In that same time frame, Tennessee has gone from about 350 new positives a day to 2,600 positives a day. That's about a 566 percent increase. So positives are increasing much faster than tests.

Credit: TDH
In Tennessee, positives are increasing faster than testing is.

In New York City, health officials show the opposite. Testing has marginally increased since the week of May 22, but positives have actually declined from about 1,400 a day to just over 300 a day as of July 18. That's a 75 percent decrease.

In this case, increased testing does not result in increased positives because community transmission is lower.

Credit: NYC Dept. of Health
In NYC, testing has marginally increased since late-May, but positives have steadily declined.

According to Johns Hopkins University, the rate of positivity "is an important indicator because it can provide insights into whether a community is conducting enough testing to find cases." 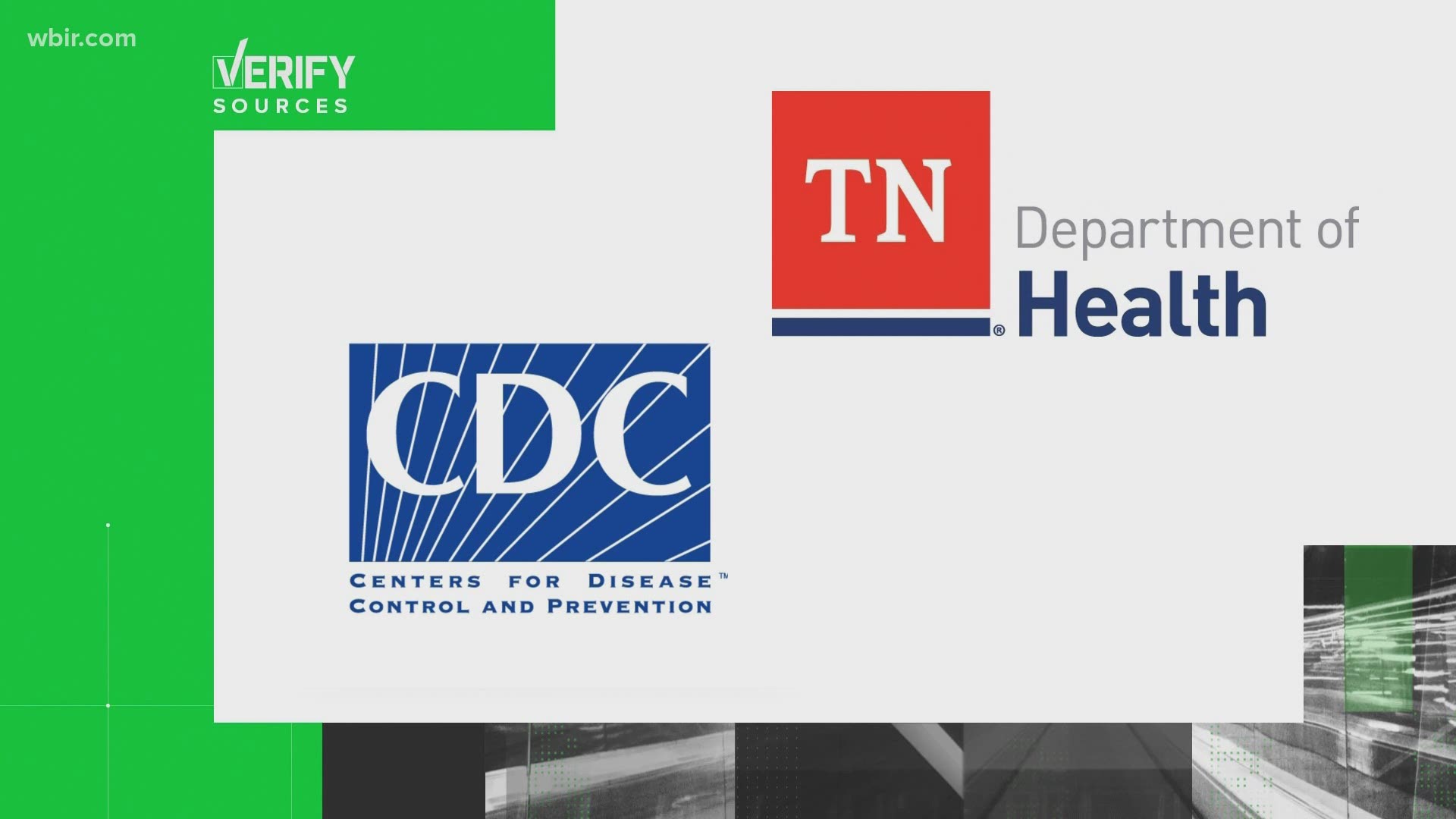 QUESTION: Is COVID-19 deadlier than the flu?

VERIFY: Yes, COVID-19 is deadlier than the flu, according to the Centers for Disease Control database and the Tennessee Department of Health.

The CDC's Underlying Cause of Death database shows the heart disease (40.63 deaths/day), cancer (38.79 deaths/day) and accidents (12.15 deaths/day) are the three leading causes of death for Tennesseans in July.

Influenza and pneumonia combined to rank ninth, with about 3.12 deaths a day in Tennessee.

The Tennessee Department of Health had reported 267 deaths from COVID-19 from July 1 to 21, which is approximately 12.71 deaths a day.

That would put it third on the CDC's list, only behind heart disease and cancer.

Even during peak flu season, COVID-19 would surpass influenza and pneumonia on the CDC's leading cause of death list if it continues at this rate. 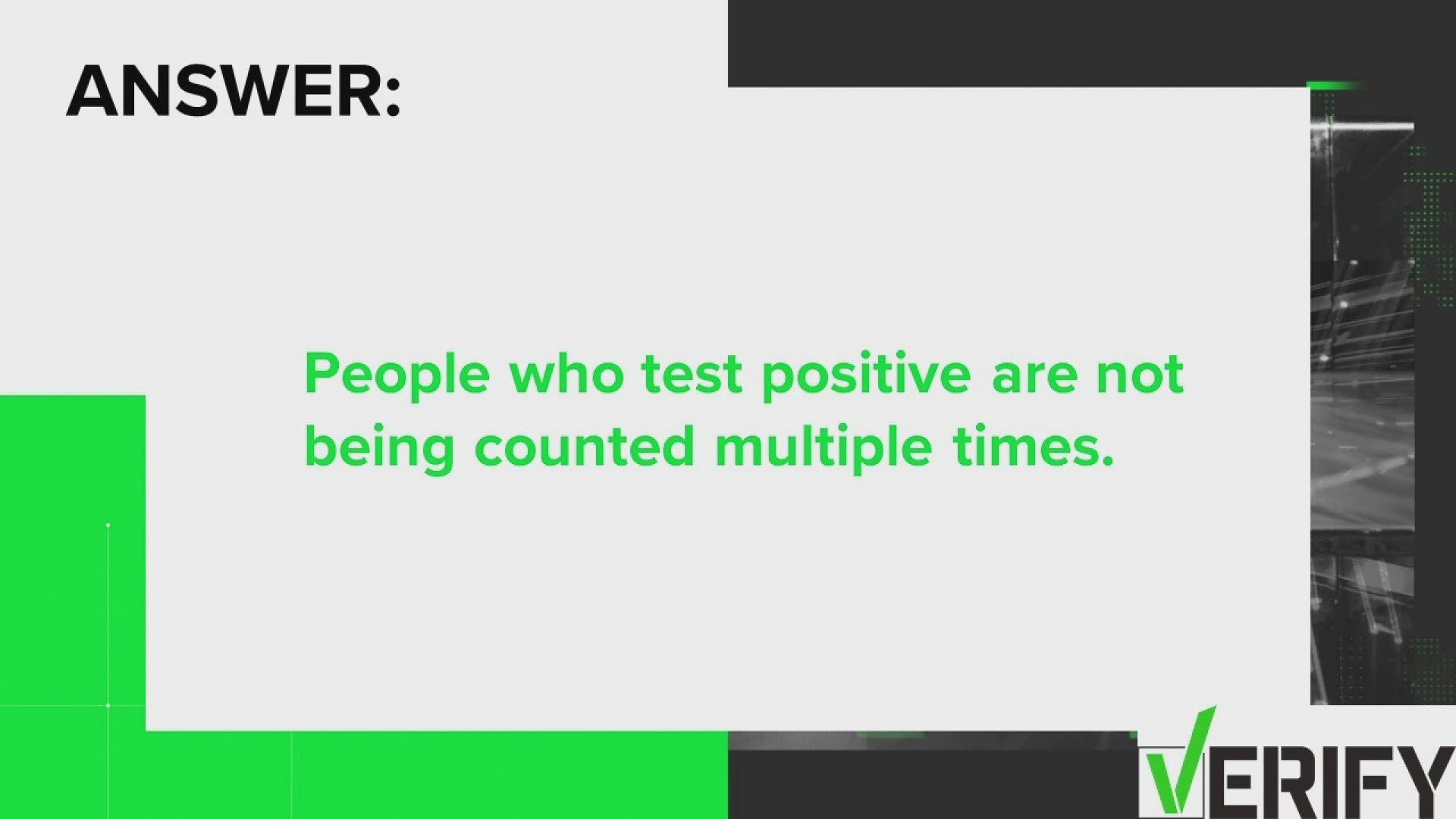 VERIFY: No, each person can only be counted once in the total number of cases, per the Tennessee Department of Health.

As of July 21, the Tennessee Department of Health was reporting 81,122 confirmed cases of COVID-19 and 95,765 positive test results. If someone tests positive more than once, their results will show under the "positive" column multiple times, but not in the "case" column. That is why there is a difference of nearly 15,000 cases.

RELATED: Highest daily case jump expected Thursday for Knox County; more than 300 could be in regional hospitals by September 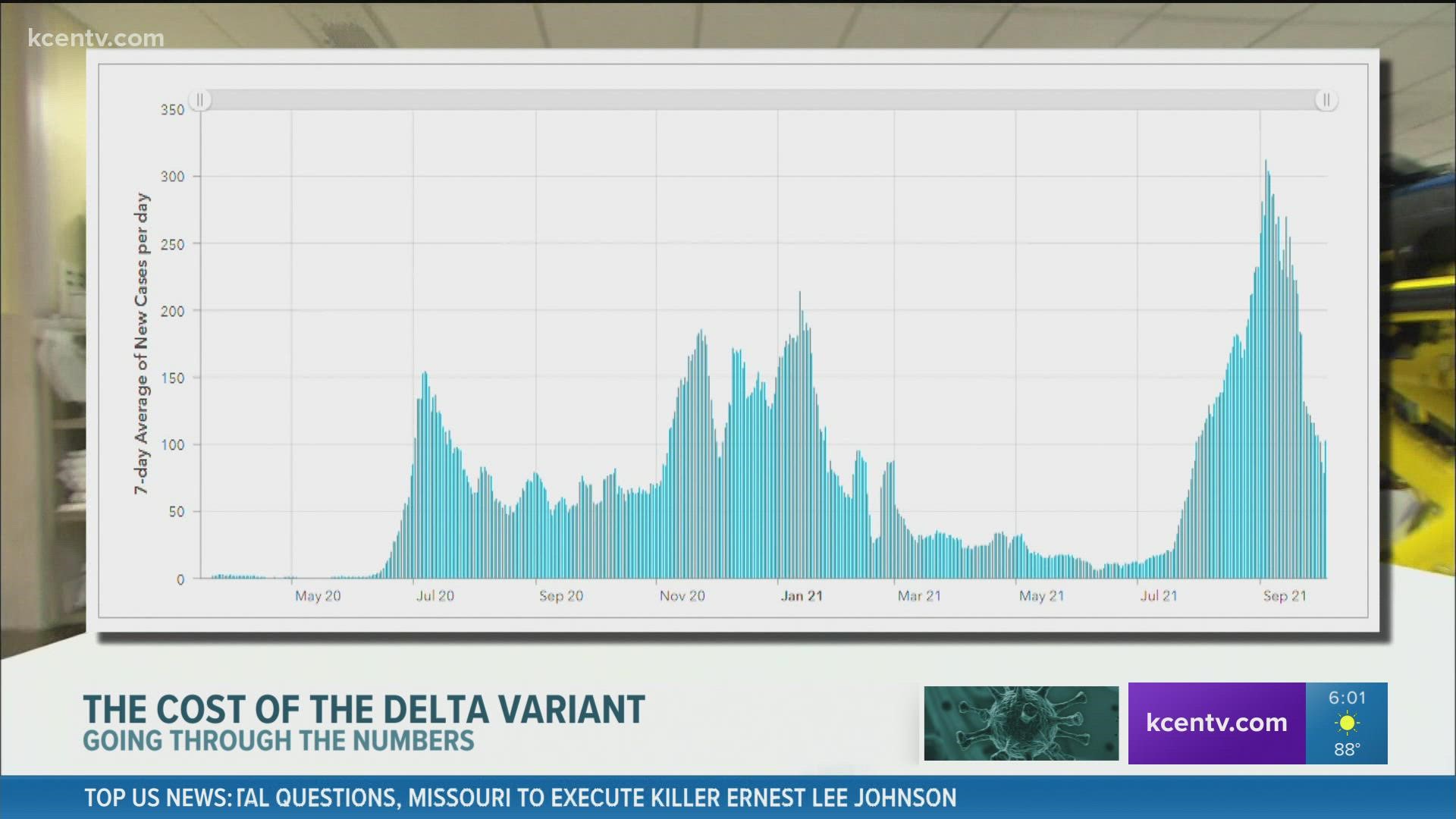 By the numbers: How the delta variant has impacted Central Texans