With just around a week until the next round of many rent payments is due, some are still struggling to come up with the money due to the impacts of COVID-19. 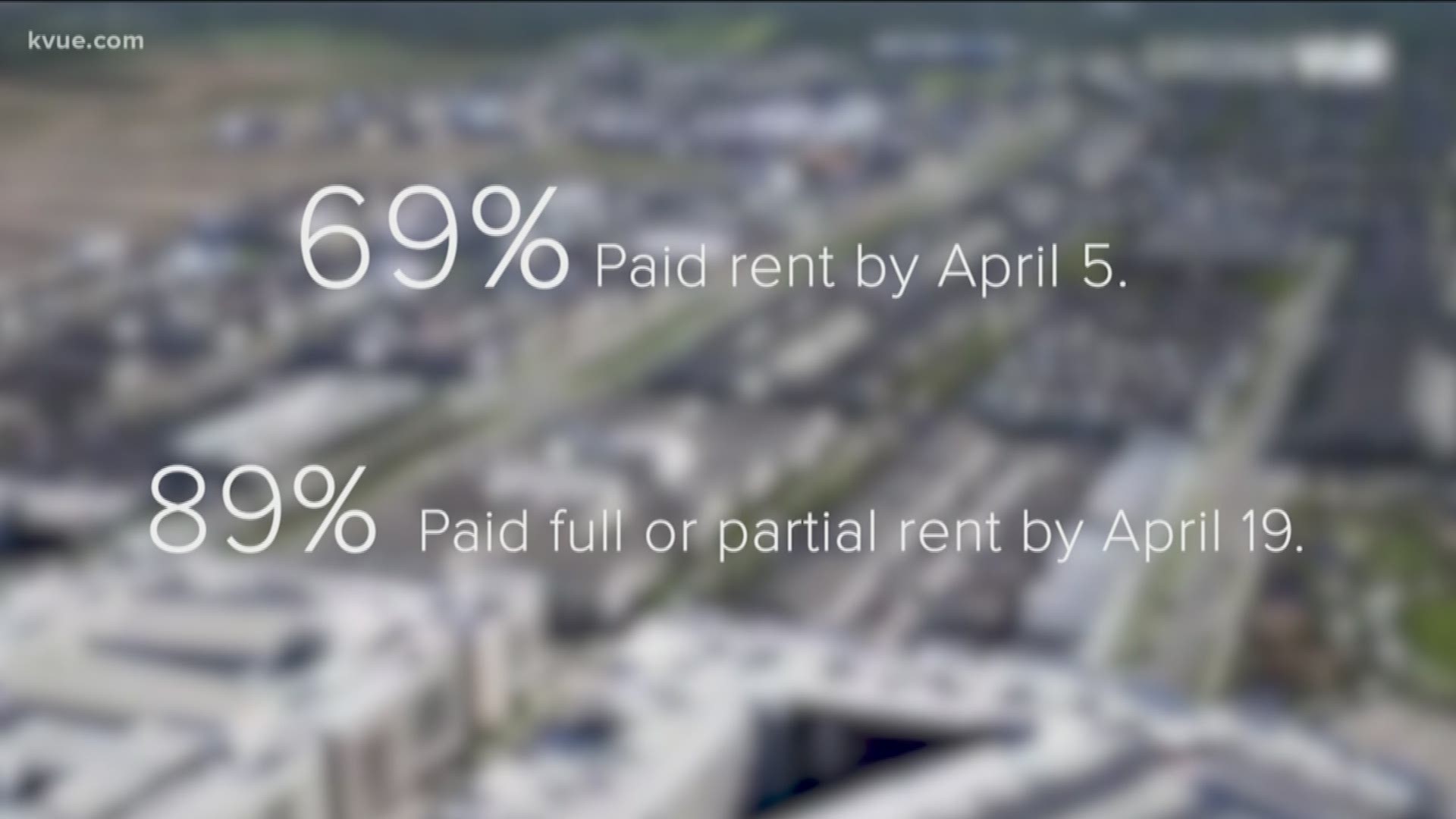 AUSTIN, Texas — By now, the coronavirus pandemic seems to have impacted everyone in some way. But for those who may have lost their jobs, paying rent has been a struggle.

There's a little more than a week until the next round of many rent payments could be due.

According to the National Multifamily Housing Council (NMHC), who launched a Rent Payment Tracker, they found that 69% of households had paid their April rent by April 5. That compares to 81% that had paid for March rent by March 5 of this year, according to the NMHC.

But if you look at more recent numbers, the NMHC found that 89% of apartment households made a full or partial rent payment by April 19 in its survey of 11.5 million units of professionally managed apartments across the country, which is up five percentage points from April 12.

"Which is, I think, the result of the residents and the property owners coming together and having those conversations," said Emily Blair, the executive vice president of the Austin Apartment Association.

The association works with residential landlords big and small.

"Because right away we said 'communicate, communicate, communicate' and make sure to strike up those conversations early on to arrange those payment plans and sort of have a gameplan to get through this," Blair said. “I think everyone’s concerned and looking at all the different indicators that people have been out of work for a longer period of time now. Maybe they’re using wages from March to meet their April rent payments, but now there’s a larger economic impact that everyone has felt.”

At the Austin Tenant's Council, which helps renters with resources, they said they've seen double the amount of clients because of COVID-19.

“Ninety percent of the clients calling us or contacting us through our online portal are looking for assistance related to concerns around eventual eviction," said Jeannie Nelson, the executive director of the council. “Our website has doubled the number of hits over the last 30 days.”

Nelson also said that while we haven't seen the number of evictions rise in April, they need to be ready in case that begins to happen in May.

“We haven’t seen the wave of evictions because there are a number of protections but eventually those monies will come due, and I do believe that we’re going to need to be ready with rental assistance and tenant advocacy assistance when that does happen," Nelson said. “Certainly important for both tenants and landlords to understand the protections that tenants have right now.”

RELATED: All Together ATX awards $1.8M to 97 nonprofits

At BASTA, which helps renters who seek affordable housing, they're seeing a lot of the same.

“The COVID-19 impact has had a devastating impact on renters in Austin. We’ve heard from dozens upon dozens upon dozens of our members that they have lost jobs, that their loved ones had lost jobs,” said Shoshana Krieger, the project director at BASTA. “There are a lot of folks who we talked to who didn’t lose their jobs until the last week of March or the first week of April. Or they had enough money to cover April rent but they weren’t going to have enough money to cover May rent.”

On March 26, the Austin City Council voted on an emergency ordinance allowing for a 60-day grace period for rent payments.

If you're worried about rent and mortgage payments, here's what you can do to relieve financial stress.