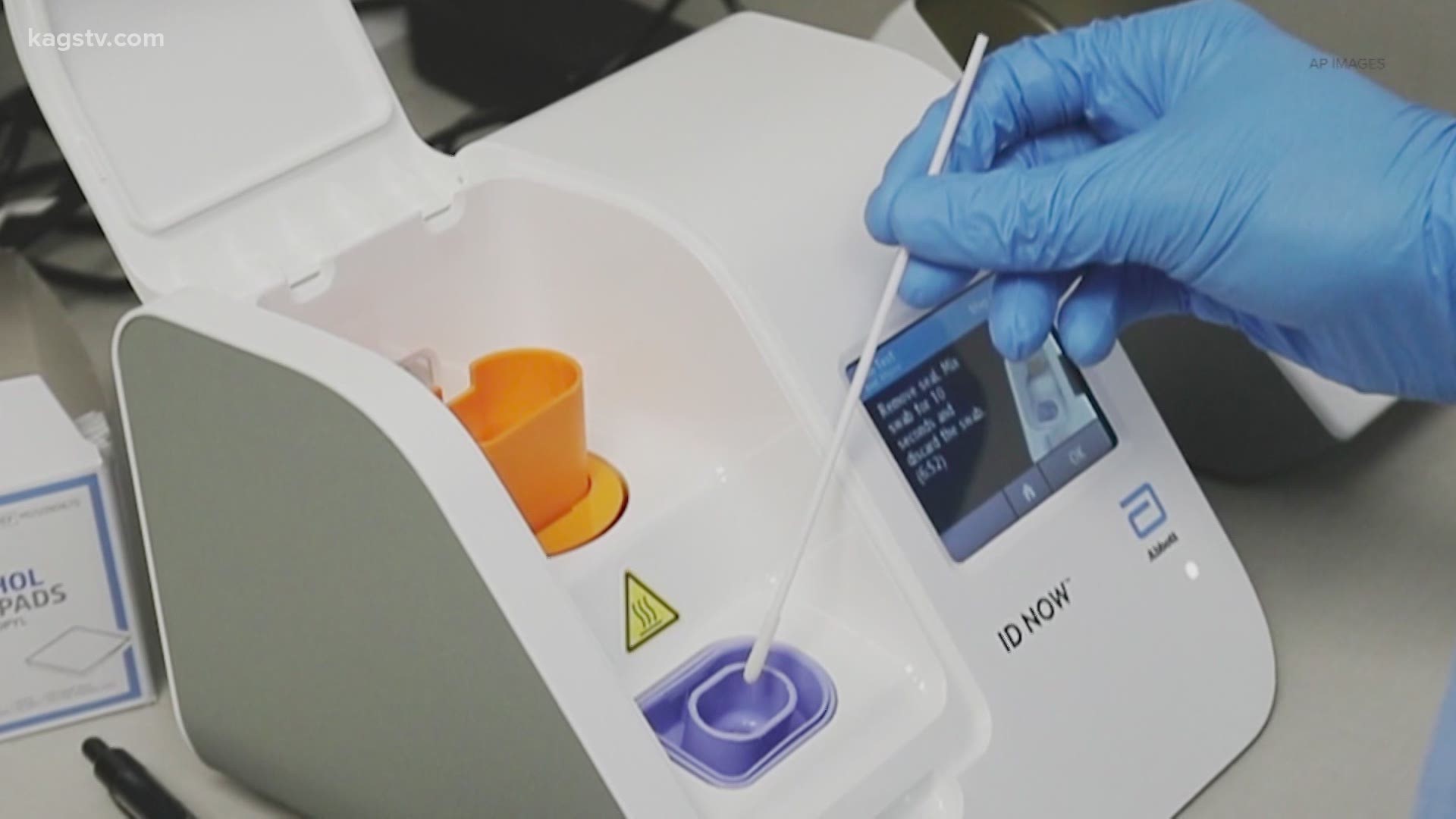 HOUSTON — The U.S. Food and Drug Administration says if you’ve tested negative for COVID-19 with an Abbott ID NOW Point-of-Care test, you might have to be re-tested, because early data show potential inaccurate results that may return false negatives.

“We are still evaluating the information about inaccurate results and are in direct communications with Abbott about this important issue,” said Tim Stenzel, M.D., Ph.D., director of the Office of In Vitro Diagnostics and Radiological Health in the FDA’s Center for Devices and Radiological Health in an FDA press release. “We will continue to study the data available and are working with the company to create additional mechanisms for studying the test. This test can still be used and can correctly identify many positive cases in minutes. Negative results may need to be confirmed with a high-sensitivity authorized molecular test.”

“There are a couple of reports out showing that the number of false negatives can be as high as 48 percent. And a false negative is when someone truly has the disease. But the test says that they're negative,” said Dr. Catherine Troisi, an infectious disease epidemiologist at UTHealth School of Public Health in Houston. “These findings about the Abbott test are extremely concerning. I mean, if you know you have a one, if you test negative, there's only a 50 percent chance you really are negative. That's not good.”

Gov. Abbott on April 3 announced the state was receiving 10,000 Abbott Lab tests to start with and more on the way, primarily aimed to rapidly testing first responders.

Austin Public Health, which serves the city and Travis County, told KHOU 11 it was hoping to deploy the one rapid testing machine they received from the state to quickly test facilities that have experienced a cluster of cases, such as long-term care places as well as any other facilities that had experienced an outbreak.

The agency spokesperson told KHOU 11 it has not been able to use the ID NOW analyzer it had received in mid- to late April.

“We’ve been waiting on the test kits for the device because they’re in short supply,” a spokesperson told KHOU 11. “Have a request into the state to get the supplies.”

The spokesperson said she didn’t know when the supplies would be delivered.

“We’re looking at the guidance and best practices from the state as they roll these out,” the spokesperson said.

Dr. Troisi said no lab test is perfect, but the currently published error rate for Abbott Labs is high.

“What the FDA now is saying is that if you test negative on the Abbott test, that you should be retested with another type of test, which means you're getting two tests instead of one when we don't have enough testing out there,” Troisi said.

“Pointed to other studies that have found it is as accurate as any other test being used,” NPR reported.

KHOU 11 had a scheduled interview with Gov. Abbott prior to working on this story. Here’s what he said about the FDA warning regarding false negative test results provided by Abbott Labs:

Harris County pointed out anyone can get tested for free with the tests the county has. The only requirement is if the person thinks they’ve been exposed to COVID-19 anywhere. No symptoms are necessary to get tested.

The county also said it had contact tracers, but they’re not substitute for prevention. Harris County suggested people go online to readyharris.org or hcphtx.org to fill out a short survey that will guide them through and eventually will provide a testing location closest to their address.

If you don’t have internet, call (832) 927-7575 to do the survey. Harris County said it has permanent and mobile testing sites people can use. The results can take up to 5 days to get back.

KHOU 11 also checked with the health department in San Antonio and Bexar County on whether they use the rapid test. Metro Health said it’s not using them.

A Dallas Count spokesperson issued the following response: “Dallas County HHS does not use the Abbott labs rapid test.”