Peyton Copeland, 5, contracted COVID-19 in November. About a month later, her mom says she fell ill again, but this time with something she'd never heard of: MIS-C. 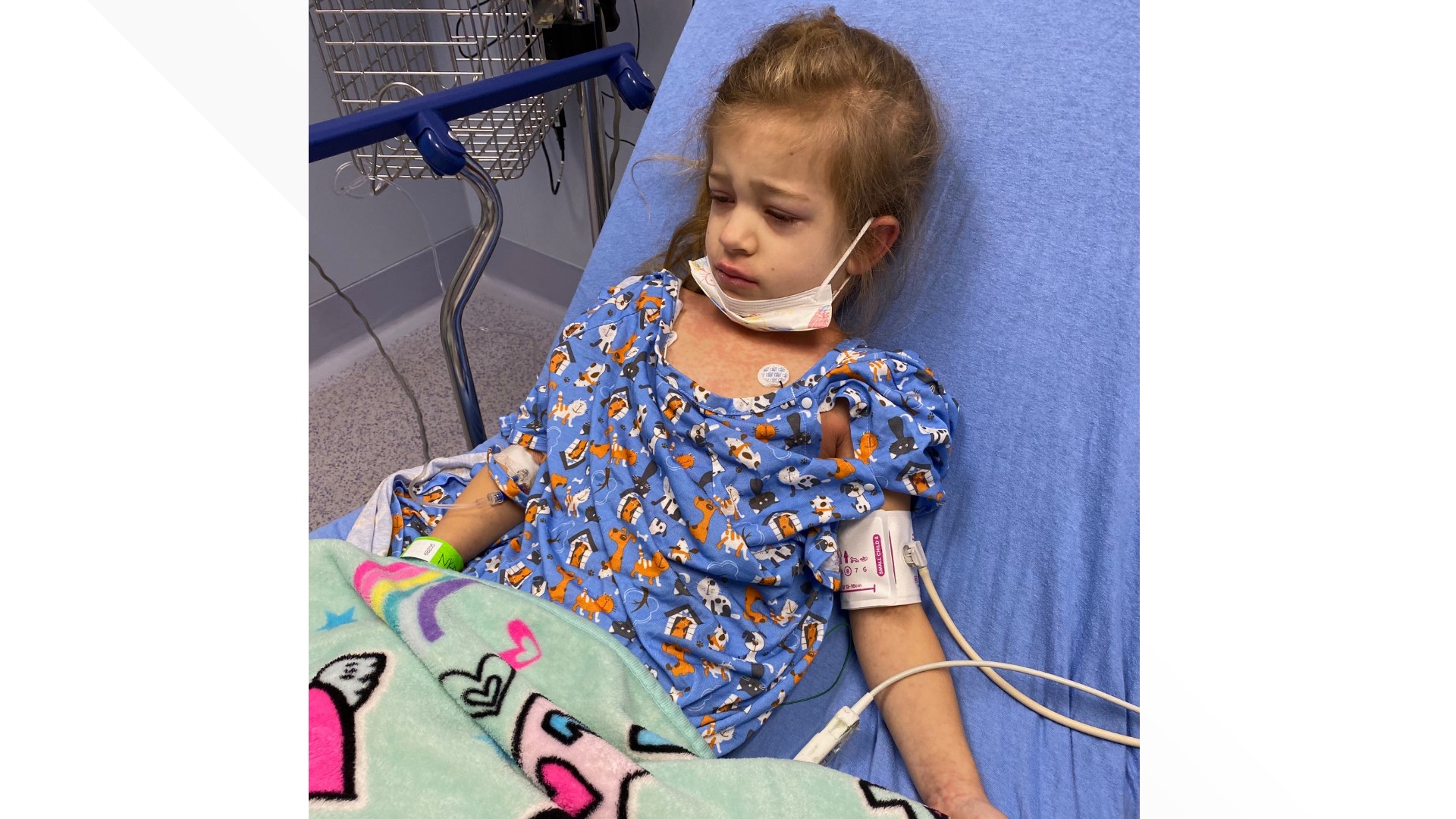 FORT WORTH, Texas — Tara Copeland wants people to see pictures of her daughter Peyton in the hospital not to scare them, but rather to warn and educate them about what could happen after their child has COVID-19.

"It's just day by day right now," she said of her daughter Peyton's condition.

The 5-year-old is at Cook Children's Medical Center in Fort Worth, being treated for Multisystem Inflammatory Syndrome in Children, or MIS-C. It's a rare post-COVID illness that can present in the weeks after children have recovered.

"They told me here the sooner they get the kids, the less harm it will do to their bodies," Copeland said.

In Peyton's case, doctors at an urgent care initially said she had strep throat. But she kept getting worse, Copeland said.

"Her fever was uncontrollable, it was like—it was getting close to 104," she said. "Her eyes were severely swollen, nose was swollen, face was swollen, mouth was swollen."

Peyton also had a rash all over her body, her mom said.

When the Parker County family came to the ER at Cook Children's, the MIS-C diagnosis came quickly after doctors inquired about Peyton's COVID history.

"They asked me if she'd had COVID and I said yes, about a month ago," the mother recalled. "I'd never heard of [MIS-C] or I'd have had her in there sooner. That night she ended up in the ICU and the next day she was put on a ventilator."

Five children are fighting MIS-C at Cook Children's, a hospital spokeswoman said. Angie Abbott's son, Cason, is included in that number. The Abilene mom says she, too, had never heard of MIS-C.

"When they were like, oh, this is what he has, I was like-- what is that? You know? I didn't know what that was," Abbott said Wednesday.

Copeland says doctors don't know why Peyton got MIS-C while Peyton's four siblings did not. Peyton did not have any pre-existing conditions, her mom said.

"The doctors up here say she's the sickest one they've seen yet," Copeland said.

While she can muster a smile now, Peyton's recovery will be long, Copeland says. She says her daughter's behavior is "completely different," saying she's not herself and looks at her parents with no expression.

She hopes her daughter's story will help even just one kid from getting this sick.