Gov. Lee outlines 'Tennessee Pledge' reopening plan; many restaurants will be allowed to reopen at half capacity starting Monday

The governor held a "special" briefing Friday morning outlining his guidance specifically for restaurants and retailers in 89 counties. 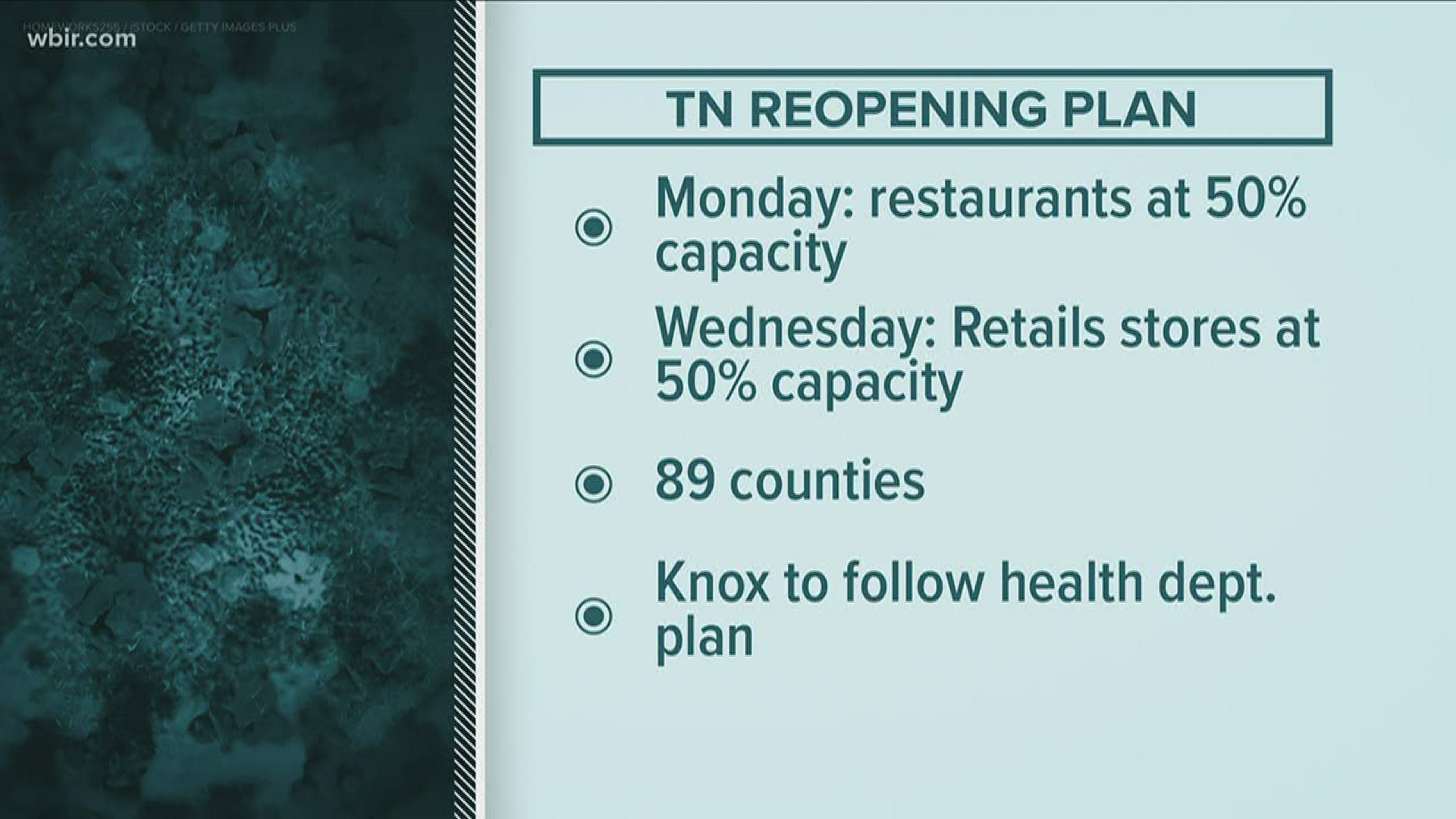 Lee's Safer at Home order will expire April 30, allowing most Tennessee businesses to begin the reopening process starting May 1.

Knox County and Knoxville leaders, however, said they weren't ready to reopen some businesses until at least May 1. They plan to speak more about that Monday morning.

The governor held a special briefing Friday morning, outlining first-round guidance specifically for restaurants and retailers in 89 counties on how to guide the reopening process. His directive doesn't include six counties with their own health departments including Knox County. Knox County will follow its own plan.

Lee is calling the plan the "Tennessee Pledge," which asks businesses, employees, and people to follow social distancing guidelines to protect themselves and others. It's a strategy the state is adopting in lieu of a heavy enforcement approach right now. 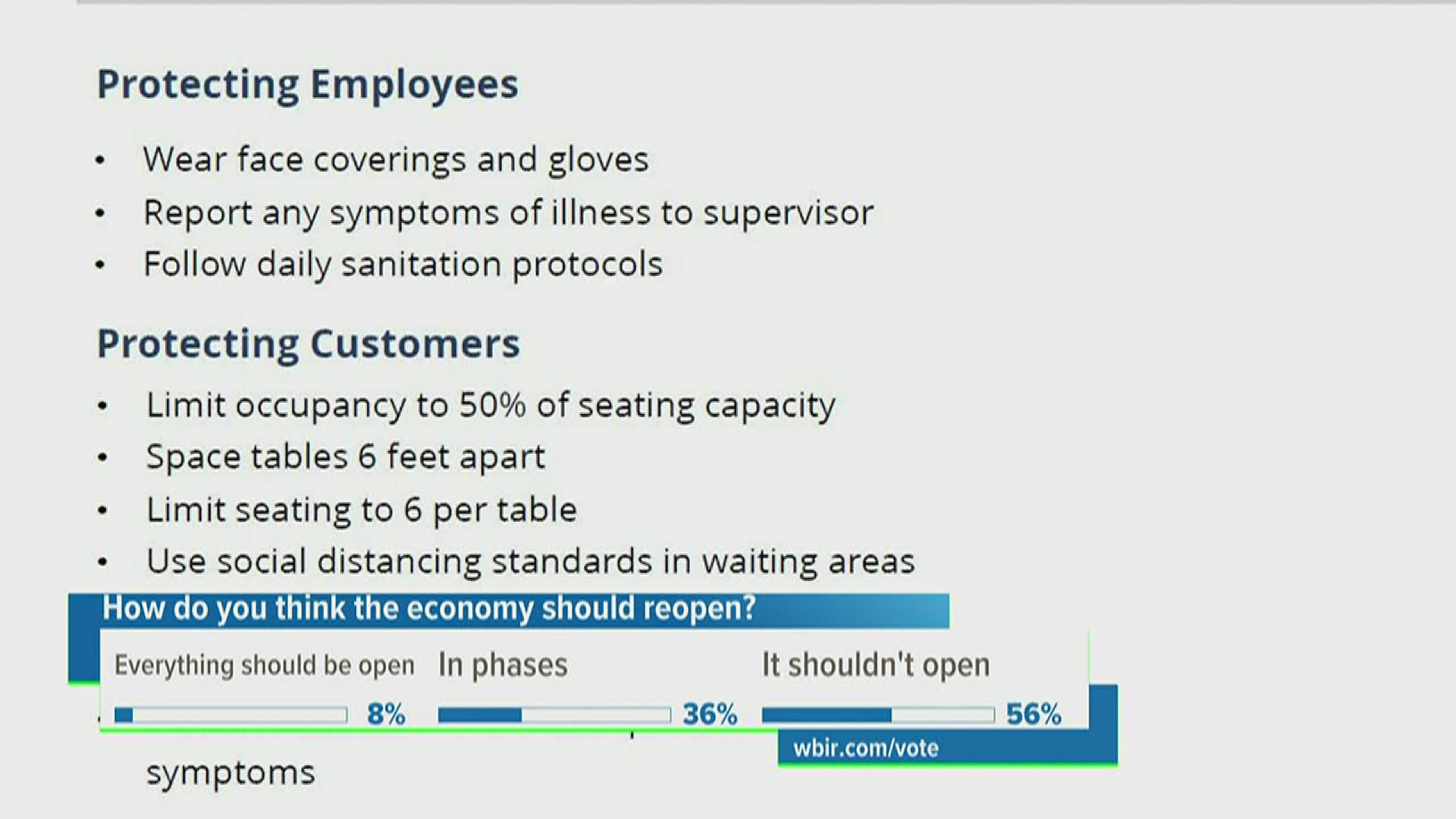 Lee said not all industries and businesses are in a position to reopen safely immediately -- specifically mentioning ones that are 'impossible to social distance' such as barbers and salons -- saying they will have to wait a little longer until there are more measures in place, such as having adequate protective equipment.

Churches and gym also are directed to hold off reopening and are expected to get further guidance next week.

The state is also discouraging out-of-state visitors, saying the approach to reopen tourism will take some time.

Lee also said the economic impact to the state could be harsh.

Some 400,000 residents are out of a job, he said. There's a potential $5 billion loss to the state's gross domestic product that lawmakers and the executive branch may have to address in the coming weeks and months, he said.

Many East Tennesseans also have reached out to WBIR seeking help because they've been unable to get unemployment claims filed for weeks. The state said it's working daily to improve the claims process.

Phased reopening for the state

"What we can't do is think that it's going to go away," state Sen. Dr. Richard Briggs of Knoxville told 10News. "We've done nothing to make this go away. All we've done is limit the spread and the rapidity of the spread."

Lee said Friday most restaurants in the state will be allowed to reopen starting Monday, April 27 -- but are told to limit customers to 50 percent of the business' capacity and follow social distancing guidelines.

They'll be asked to post notices telling customers they're following the recommended guidelines.

Retailers will be able to reopen except for those in the major metro areas on Wednesday, April 29 under the same limitations.

Lee said he is encouraging Tennesseans to engage with the reopening process and support these businesses -- but to do so in a responsible way.

"We want our economy to open in a slow, measured way," he said.

Lee said the guidelines will ask businesses to ensure they are taking steps to protect the health of their employees and customers such as moving seating further apart, keeping more stringent sanitation standards, staggering shifts, and screening for illness. The plan also encourages everyone to act responsibly, follow social distancing guidelines of maintaining 6 feet of distance between people, and wear protective equipment such as masks and gloves when possible.

Lee said he is asking restaurants to focus specifically on safely serving food -- saying bar areas should remain closed and to not have live music for now.

Bars, nightclubs, and limited-service (fast food and fast casual) restaurants will remain closed to people for eating and drinking on-site, but take-out, drive-thru and delivery sales will remain allowed.

For retailers, Lee is asking them to consider offering curbside pickup and dedicate special hours specifically for the elderly and front-line responders.

"Until we have a vaccine, it is imperative that we work together," Lee said. "Only working as a community of Volunteers can we successfully reboot our economy."

The governor said the data he's seen has been encouraging in the past two weeks, saying the rate of both new COVID-19 and flu cases have been on the decline in nearly every hospital in Tennessee. The governor also cited the success of increased testing and having stable hospital bed capacity.

If the numbers spike again, the governor said they will make decisions as needed -- saying they are keeping a close eye on the data.

According to Gov. Lee's newest executive order, restaurants are expected to follow the state's recommendations. The order states the governor and state officials may issue additional health and safety orders if cases rebound or if businesses are found operating in unsafe manners.

Dr. Lisa Piercey, Tennessee's commissioner of health, on Tuesday said the state has seen a "steady decline" in the COVID-19 growth rate and therefore satisfies the criteria for entering phase one.

The growth rate has increased over the last two days, but she said that was not a concern.

"That includes a substantial number of the remainder of the prison population tests that we referenced the last couple of days," Dr. Piercey said.

For Tennessee's largest cities of Knoxville, Nashville, Memphis and Chattanooga -- a separate task force was formed to guide their reopenings -- which could push reopening dates back further if needed.

City and county officials announced Friday afternoon they wouldn't reopen restaurants or stores until at least May 1. They're working on a plan, they said, to start reopenings beginning May 1.

RELATED: Nashville mayor releases his reopening plan & it could tell us what to expect for the rest of Tennessee

RELATED: 366 Knox Co. employees will be temporarily furloughed because of COVID-19 pandemic