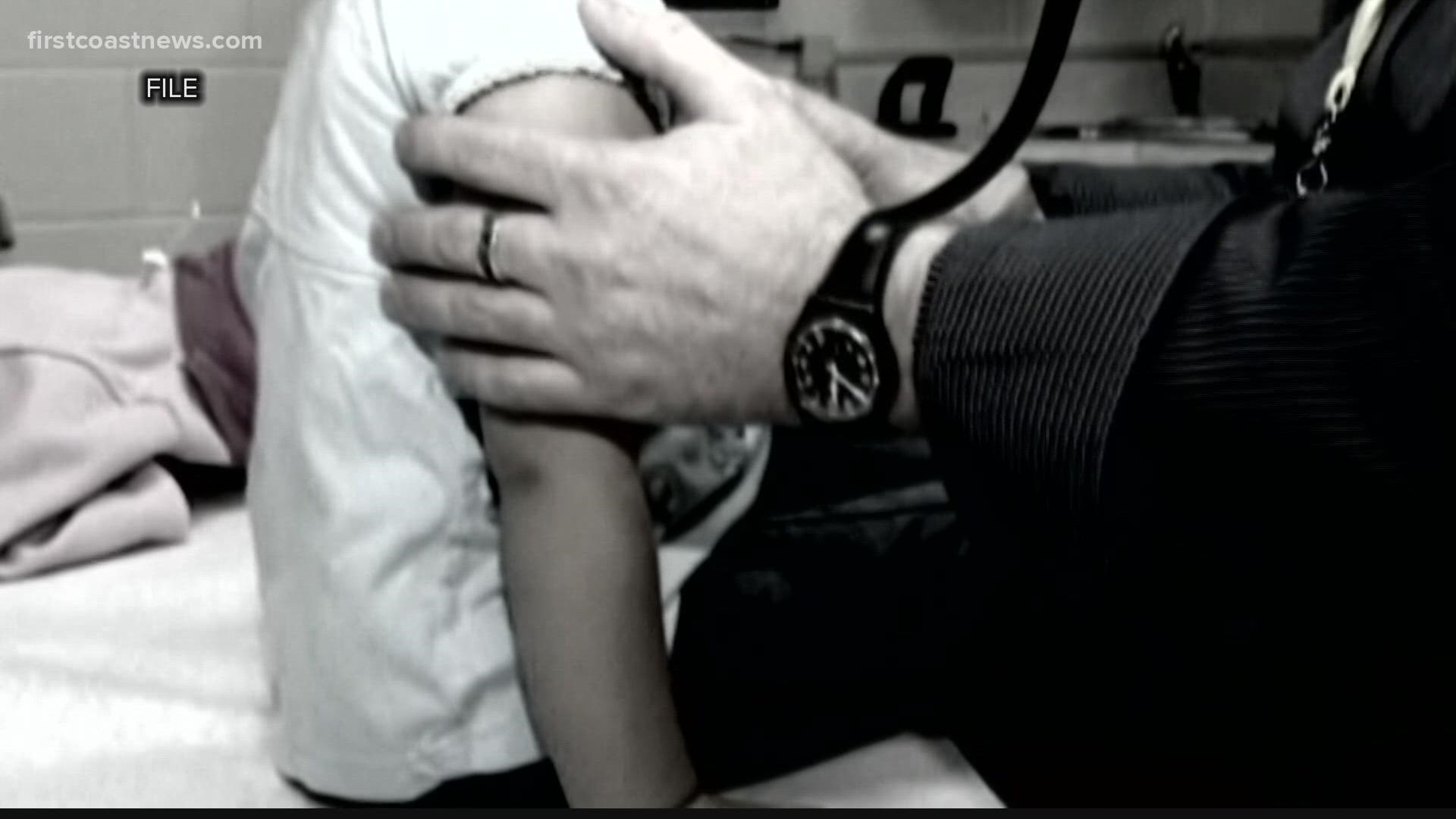 That was the question a young COVID-19 patient at Wolfson Children's Hospital recently asked Mark Toney, who is chief of hospital pediatrics at Wolfson and division chief of the pediatric hospital clinic at Nemours Children's Specialty Care, Jacksonville.

Another Wolfson patient told him, "COVID got me."

That Jacksonville-area children are even getting the coronavirus, much less being hospitalized, Toney finds perplexing, even painful. If most people eligible for the vaccine — which is also available for children ages 12 and up — had gotten it by now, some of those illnesses might have been prevented.

"The numbers have been getting higher the past eight weeks," Toney said. "The fact that we have a way to protect them … It's been very frustrating."

Hit hard by COVID:Their family was scared of the vaccine. They lost 4 members to COVID-19 within 1 week.

Wednesday a 16-year-old who was not vaccinated died at Wolfson, the hospital's first death of the current COVID-19 surge.

Friday, Wolfson had 12 patients with the virus, three of whom were in intensive care.

Since the early 2020 start of the pandemic, about 4.2 million U.S. children have tested positive for COVID-19 as of July 29, according to the American Academy of Pediatrics. About 72,000 cases were added in the week ending July 29, with 39,000 the week before, according to the academy.

Nationwide there have been at least 540 COVID-19 deaths of children age 17 and younger since the start of the pandemic, according to the U.S. Centers for Disease Control and Prevention. There have been at least seven in Florida age 16 and younger, according to the Miami Herald, but how many is uncertain because the state has stopped reporting age-based COVID-19 deaths to the CDC.

Severe illness and death from COVID-19 is rare among children. But even seeing them sick is "gut-wrenching," said Mobeen Rathore, chief of pediatric infectious diseases and immunology at UF Health Jacksonville and at Wolfson.

He said he cannot understand why some of the same parents who use child car seats without complaint do not view the vaccine as a similar safety measure. If they did not use safety seats, "I don't think anybody would tolerate that," he said.

"As parents, we want to do our best for children," Rathore said. "We have to protect them, we do that all the time. Kids that get infected, most don't get that sick, but some are going to get very sick."

In class:Duval School Board approves mask requirement with opt-out clause

The vaccines do not prevent COVID-19 but, for most people, prevent severe cases that require hospitalization or lead to death. They can also help prevent so-called "long COVID" conditions, which are new, returning or ongoing health problems that occur four or more weeks after the infection, according to the CDC.

For a child, long COVID could mean "a lifetime of complications," Rathore said. "Very scary."

COVID can cause long-term symptoms

Her son Kyle was 12 when he was diagnosed with COVID-19 in February, despite the family taking all the precautions. He struggled with the virus — quarantined in his home, with his parents leaving his meals outside his bedroom door, interacting with him via Facetime — then he struggled with long COVID, Schatz wrote in an essay published online in July.

"From the get-go, his worst symptoms were crushing fatigue and a nonstop cough, which nothing seemed to help," she wrote. "After 14 days, we were able to take him to other doctors … They tried steroids, antibiotics, asthma medicine and several different inhalers. Nothing seemed to help.

"His cough wouldn’t quit and neither would his fatigue or headaches," Schatz wrote.

His symptoms continued for five months.

"As the weeks wore on, Kyle had some good days, during which he was able to walk the dog briefly or play catch with my husband for a few minutes," his mother wrote. "But he would sometimes then feel worse the following day, or days, and have to be re-confined to his bed. It felt like every time he seemed to turn the corner, something would set him back."

By July the family was "taking it one day at a time, as there are still so many unknowns surrounding long COVID, which his doctors … have been frank about," she wrote. "In Kyle’s case, the biggest concern seems to be his now severe and persistent asthma."

Schatz told the Times-Union Thursday that Kyle, now 13 and vaccinated, "finally seems to be doing better." But he still takes medication to control his asthma symptoms and, after dealing with a bout of long COVID, his family worries whether there is more to come.

"We don't know what the long-term effects could be, so we are concerned about that," she said.

In his mother's essay, Kyle encourages people who are not vaccinated to get the shots: "It's worth it, even though you don't feel good after it, but it's much, much better than being sick for a long time."

Many children who escaped the virus themselves have still been scarred by the pandemic.

More children are coming in with not only anxiety and depression, but also eating disorders. The pediatric behavioral health program has increased the number of beds for patients and tripled the outpatient program.

"Isolation is a big component … a sense of hopelessness that comes about," Andrews said. "It was tough for kids and even teachers to figure out how to teach an online environment."

"With the recent surge, then you have a lot of parents that are very concerned about the vaccines that haven't been approved yet for the kids," Andrews said. "There's a lot of concern about, 'Are they going to be masked up or are there going to be social-distance precautions?'"

Back to School FAQ:What you need to know in Duval County

"It's definitely a tough environment to navigate right now because it's so important, especially with the number of behavioral health emergency admissions that we've seen ... to get kids back to school and get them back in these social settings … making sure that they're safe at the same time," she said.

Jodie Bisogno, director of critical care at Baptist, is also concerned about the reopening of schools. The Duval County School Board has approved a mask mandate, but parents can opt out their children by submitting paperwork.

"Any time there's something … this infectious, going back to school where people are going to be in rooms together and group together, we are concerned for spread," Bisogno said. "We've heard that children won't get as sick [as adults] but … they can still carry it, carry it home to their grandparents, their aunts, their uncles.

"That's how the spread happens and we really need people to think it through," she said.

The current rise in child COVID-19 cases is part of an overall increase in hospitalizations for the virus, with even adult patient ages trending younger, mostly ages 25 to 55, according to Florida Hospital Association President Mary Mayhew.

In earlier surges, most hospitalized patients were 65 to 85, she said. Then the availability of vaccines helped immensely for the elderly, she said.

Now at least 90 percent of people hospitalized with COVID-19 are unvaccinated, most of them felled by the more contagious delta variant. That's why the association has in recent weeks "been focused on the vaccine," Mayhew said.

"The previous variant didn't have the same impact on younger adults," she said. "If we're going to stop the spread of mutations, we need everybody vaccinated. … That could put the pandemic in the rear-view mirror."

At Baptist's five hospitals, about 47 percent of current COVID-19 patients are age 50 and younger. Shalika Katugaha, an infectious disease specialist at Baptist, attributed the surge to the stronger delta variant and to the vaccination rate in Jacksonville. The rate is about 52 percent.

"As a group, they [younger adults] are not as vaccinated as the older population," she said.

Katugaha urged them to "trust the science" behind vaccines.

"I come to you with no political or religious ideology, just the wish for you to be safe and healthy," she said.

Darin Roark is hospital president of Baptist Medical Center Clay. He also has been a nurse for 22 years, so during the current COVID-19 surge he has been helping out emergency department staff.

Vaccines' effect: What to know about delta variant's symptoms, testing as cases rise

They see adults and children with the virus and give them the same care, but children with severe cases are sent to Wolfson. Often parents say, "If only I had known, I would have gotten the vaccine," he said. Adults say that about themselves too.

The stream of COVID-19 patients is so constant, Roark sometimes finds it difficult to lead and motivate his staff.

"Normally, after a crisis … You have a day to catch your breath," but not lately, he said. "Just when we think it can't get any worse, it gets worse. We feel like we're reaching the peak, the next day there is another peak.

"It's hard, knowing these conditions could have been prevented," he said. "Once you're sick, it's too late. You have to let it take its course. There is no cure for COVID, no magic pill we can give you.

Still a lot of unknowns to be wary of

But some parents do not agree.

Even with their children hospitalized with COVID-19, some still have questions about the vaccines or are dead set against them.

"It's a touchy situation," Toney said. "I've had the occasional parent be forthcoming, 'I wish I would have done this.' Some get angry. … We don't want to put a barrier between the family and the medical team."

The key is for him to answer their questions in a nonjudgmental, professional manner, as a local physician, "not an abstract Dr. Fauci," he said, referring to Anthony Fauci, the controversial director of the U.S. National Institute of Allergy and Infectious Diseases and chief medical adviser to the president.

"A lot of people just have legit concerns," he said, but "vaccines are the best way to prevent severe illness."

Rathore bemoaned the constant barrage of COVID-19 misinformation coming at the public. He begged people to listen to medical experts and ignore advice from political and social commentators.

With 30 years as a pediatric infectious disease specialist, "I know what's good for our children," he said. "I have been advocating for children all this time. There is overwhelming evidence the vaccine works, masks work.

"Go to a credible source," he said. "Of all the things in modern health care that have made a significant difference, vaccines have been the most important things."

Click here to read more from the Florida Times-Union.