We looked at county-by-county testing numbers and talked to county judges. 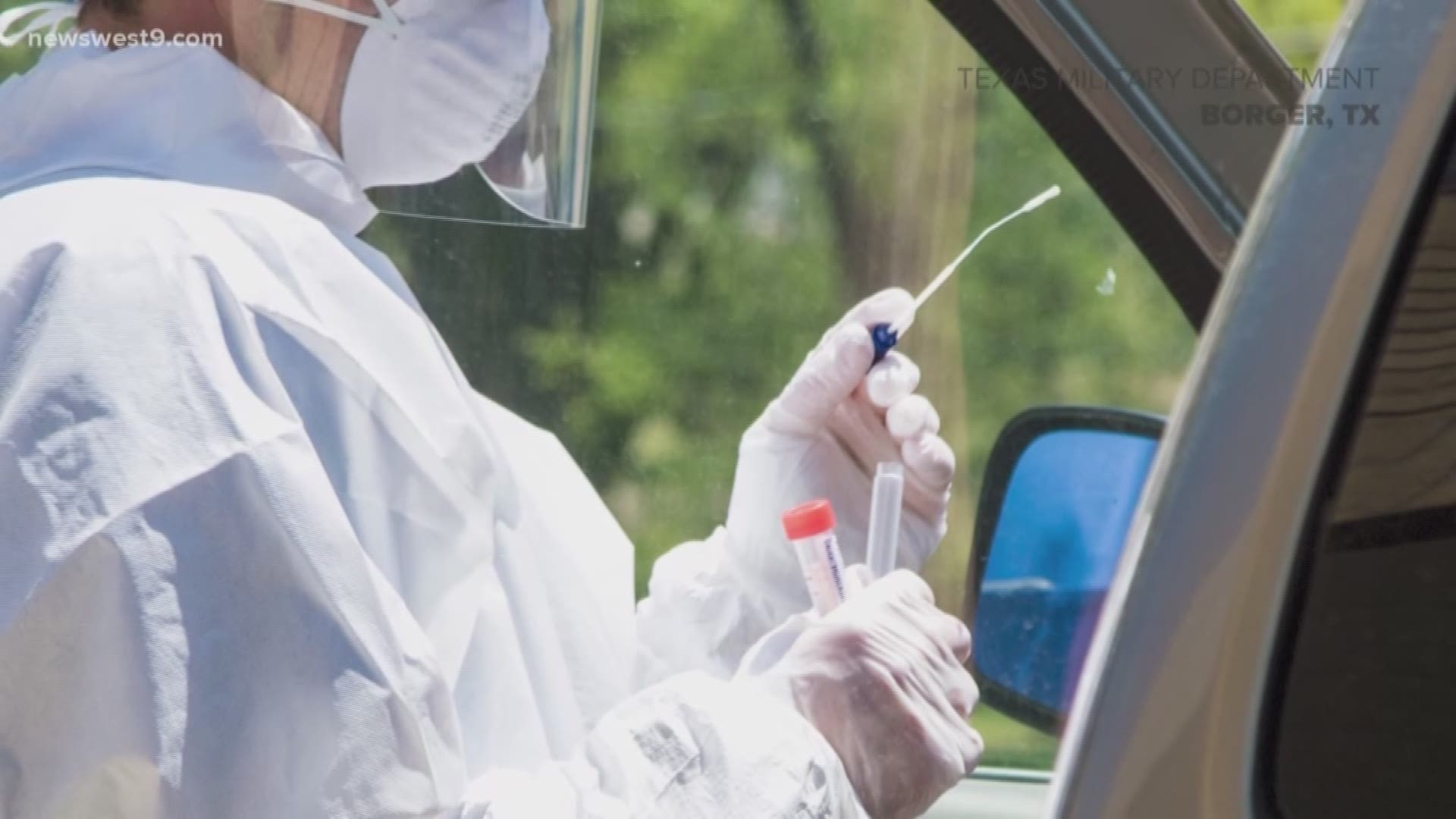 HOUSTON — As Texas leadership talks about ramping up testing, Texas Department of State Health Services reports zero test results for some counties, others with fewer than 20.

Click/tap on Cumulative Tests Over Time By County

KHOU11 started looking at the State Health Department’s county-by-county test result statistics available for the period starting May 4. Curious about access to testing, and the low number of test results in some rural areas, the team decided to call counties with fewer than 20 tests results listed. In early May, that meant reaching out to nearly 70 jurisdictions, talking to counties, leaving messages and emailing. As of mid-May, the number of counties with zero or fewer than 20 test results recorded by the state health officials decreased to fewer than 40.

This story will take you through multiple on-the-record conversations our team had with county judges about COVID-19 testing, as well as the information provided by the state health department and the Division of Emergency Management in response to some of those experiences and statements.

Edwards County is about two hours west of San Antonio. In 2019 U.S. Census estimates the county has 1932 residents.

“People can't find anybody dumber than me to take the job,” he told us in an interview via Skype. “That's the way I look at stuff. Put your faith in God and get your a** in gear and get the job done.”

Judge Shanklin’s family has been ranching in Edwards County for generations, dating back to the late 1800s.

“You kind of have a responsibility to leave it better for the next generation, and that's kind of what I'm doing,” Shanklin said. “My decisions are how what's best for this county.”

During the COVID-19 pandemic, as many counties and cities shut down, Judge Shanklin kept the county open, temporarily closing the courthouse.

“What we do is nobody else's business,” he said. “It's not a state business or not the Fed's business. We're not breaking any laws. It's our business.”

When the National Guard was about to set up a mobile test collection site in Edwards County, the judge said his staff posted notices all over the county. Of the estimated 1932 residents, he said eight showed up.

They’d heard a neighbor’s story of how the test felt, he said.

“They ran that swab up his nose on both nostrils and he said scraped the top of his skin side of his skull,” Judge Shanklin described. “In small towns, gossip is an Olympic event. You had the option to get tested or not get tested. Most of the population said, ‘I sure as hell don't want that to happen.’ So, they didn't do it.”

In an email, Texas Department of State Health Services said the agency counted and posted the total number of test results by county. DSHS received the results each day from private labs, public health labs, hospital and university labs.

Judge Shanklin isn’t worried about any of it.

“This has been overblown,” he said. “I think it's done more detriment to the country. I think it has a lot to do with politics and politicians. And that's my views on it.”

On May 7, the state health department had documented 7 test results for this county, this after the National Guard had been out there with their mobile testing unit.

“I know those figures are wrong,” Judge Spain said. “We had 21 tested Saturday.”

In an email and in a brief phone call, the Health Department told us there are several reasons why county and state testing numbers could differ.

There is a lag time between the tests being conducted, results reported to the state and then entered into a shareable spreadsheet. That lag time varies anywhere from a day or two to several days.

According to DSHS, as many as 75 staff members work on COVID-19 data.

DSHS said a large number of tests are pending county assignment because the results come with incomplete addresses, such as missing a zip code.

“Those tests will be assigned to correct county, but will take longer than it would if a zip code was listed,” a spokesperson wrote in an email.

Some counties may be posting the number of tests administered, including pending tests. The health department only reports test results, the agency told KHOU11.

“I wish I had a clearer picture of what's going on, particularly it would be nice to know how many people from Coke County we've had tested,” Judge Spain said

“If we're not testing enough people, then we don't know what's happening in the community,” said Dr. Catherine Troisi, an infectious disease epidemiologist at UTHealth who specializes in viruses.

She said while we can’t make people get tested, we can do a better job explaining why it’s important.

“We also have to be testing the right people,” Dr. Troisi said. “We need to be testing people who are in high risk situations, nursing homes, prisons, health care workers who are at high risk or picking up the disease if they work with COVID-19 patients as well. It's really important to test people who may have been infected even when they're not showing symptoms.”

Texas Division of Emergency Management told KHOU there are now enough tests available that people without symptoms can get tested.

“At the state mobile test collection sites, the National Guard is testing any individual who registers for a test and wants to be tested,” wrote TDEM spokesperson Seth Christensen in an email. “Over time we have seen an increase in testing supplies and capabilities across the state and across the nation. As this supply and capability has increased, CDC guidance has relaxed the requirements for who can receive a test. At this time, everyone will be screened for symptoms and will have the ability to receive a test even if they are asymptomatic.”

National Guard mobile test collection teams have been traveling by car and by plane since April 22, serving 336 sites across 217 of 254 Texas counties.

Christensen said some teams were collecting specimens prior to April 22, but those were teams in training.

Some sites were open multiple days, adding up to 474 test collection site days, according to Christensen.

He said that individuals without appointments have shown up to get tested.

They were asked to get out of line, register in the car by phone or at txcovidtest.org and then, with their appointment confirmation number, get back in line for their test.

To find a testing site near you and its requirements, check out https://www.texas.gov/covid19/

“There is really not a system in place to track people who are being tested,” Dickens County Judge Kevin Brendle told KHOU.

Dickens County and its 2,211 residents, according to 2019 Census estimates, live near Lubbock.

Judge Brendle said the county has a clinic that’s able to do virus and antibody testing.

He said he hasn’t requested the mobile test collection team because he felt that would invite data errors.

“The biggest issue I've experienced has been the accuracy of the reporting,” he said.

Judge Brendle told KHOU11 he was concerned the mobile test collection unit could bring in COVID-19 positive people from other counties, who might visit the businesses and continue spreading the disease. Judge Brendle said that he and his emergency management coordinator had two experiences of erroneous reporting, which made him concerned the mobile testing unit would attract people from other counties and a possible COVID-19 positive case could be erroneously assigned to his county, instead of where the person lived.

“We would lose our 50 percent service capacity and go down 25 percent. That could have an impact on our economy,” he said.

“The data are as accurate as they can be given the high volume of test results received every day and the speed in which we post the data,” a state health department spokesperson wrote in an email.

Judge Ross Sharp of Borden County, 75 miles south of Lubbock, takes care of a little over 600 residents who are spread out across more than 900 square miles.

“We’ve had nobody that has exhibited the symptoms and we were told early on that to get the testing done, you need to exhibit certain symptoms to be able to qualify,” Judge Sharp told us in the first part of May.

Still, as of May 19, the state spread sheet with test results showed Borden County as having zero.

“People are pretty cautious down here and you know, people aren’t going to do that [testing] just because they can,” he said.

RELATED: $12 million will go toward getting you a new career

RELATED: Who's watching the kids of parents on the front lines fighting COVID-19?