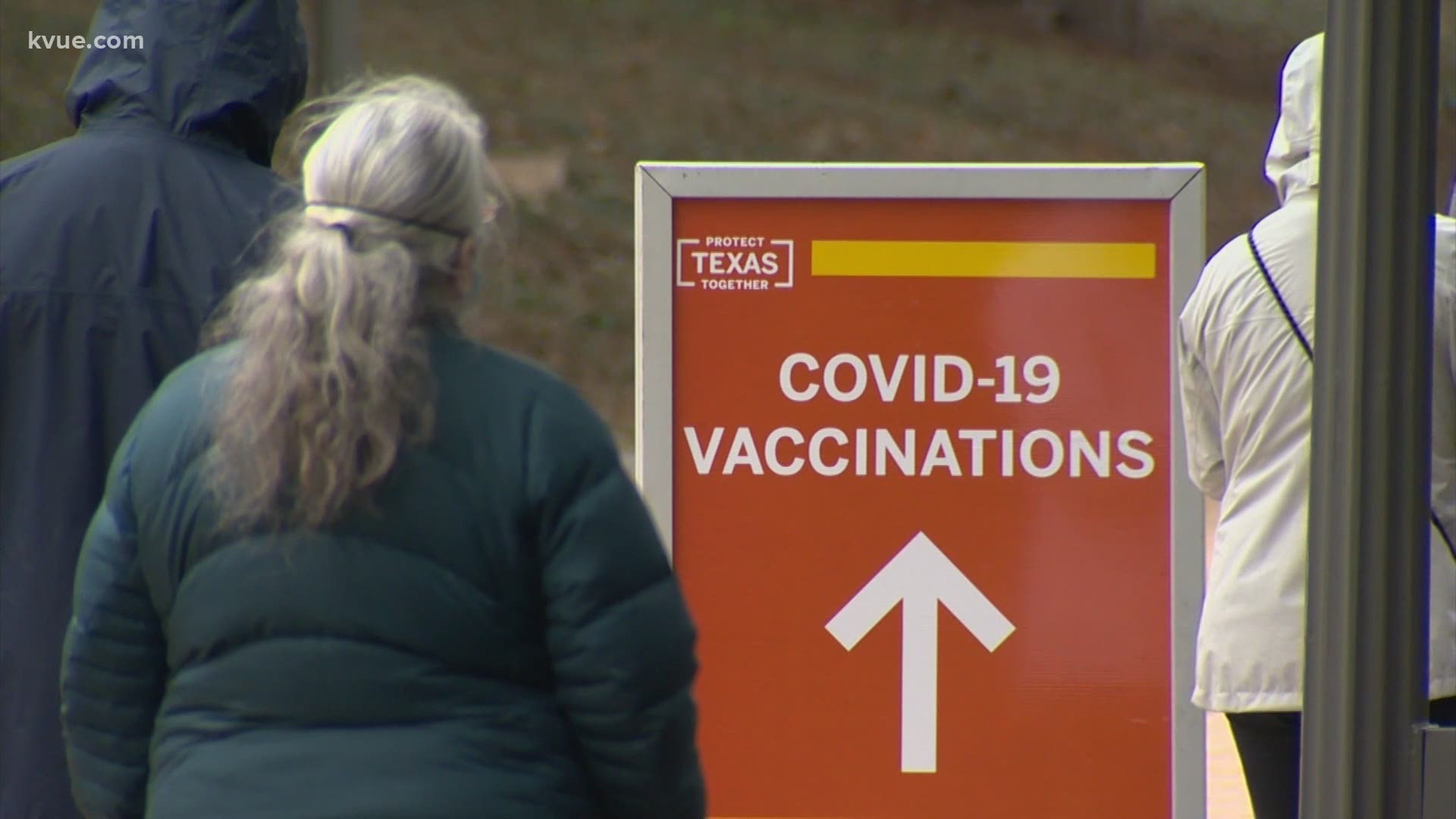 AUSTIN, Texas — Long lines were seen at a University of Texas COVID-19 vaccination site on Monday after a vaccine scheduling link was "inappropriately shared widely through unofficial networks with false information," according to UT.

The extra signups caused lines to be longer than expected.

"Their lines were just unbelievable," said Judith Grimes, whose husband stood and waited for his appointment Monday morning.

Grimes said in addition to the long lines and lack of organization, her husband heard many people getting turned away due to the "inappropriately shared" link.

"And the biggest problem is all these people were there that didn't really even have an appointment. It was put out in error. They made appointments and then they were told that there is no shot there for them," Grimes said.

Jean Kelly heard the news about this link mix-up Monday. She said she was devastated to learn that the appointments for her husband and herself Tuesday morning were likely going to get canceled.

"I'm angry right now because people are so desperate and for someone to do that, it's like a big hoax to get your expectations up and then just have them dashed like that," Kelly said, tearing up.

She said she followed the link which took her through a lengthy signup process and even included a confirmation email with an appointment time and QR code.

The only eligible people for vaccination through UT Health Austin are those who fit in the 1A and 1B categories, UT said. However, to add to the confusion, Kelly said she fits in the accepted categories.

"It's very emotional," she said. "And to get people's feelings and expectations up just [to] have them shot down, especially when it's life and death type situations, somebody needs to be accountable for this mistake."

"Over the weekend, we became aware of an active scheduling link that was  inappropriately shared widely through unofficial networks with false information about vaccine availability and who was eligible to sign up for appointments at UT Health Austin this week. This resulted in thousands of individuals signing up for appointments who did not follow the UTHA registration process, did not meet the criteria, and did not receive a personalized email from the university asking them to schedule. All appointments scheduled in this manner are in the process of being canceled; however, some individuals have showed up on-site today, resulting in longer than normal lines. UTHA is actively working to implement a technological solution to prevent this from occurring again in the future and anticipates having this in place later this week. The only way to validly request a vaccine through UT Austin is by completing the registration process at UTHealthAustin.org. At this time, we are vaccinating those individuals in Phase 1A and Phase 1B, who have completed the COVID-19 Vaccination Request Form. To avoid misinformation regarding vaccine distribution at UT Austin, we encourage you to visit this page for the latest information. We appreciate your patience and will continue to provide the most up-to-date information as it becomes available. Individuals who followed the appropriate sign up process will be vaccinated as scheduled."

UT later added the following regarding the link that was sent out:

"The link was not inadvertently shared by UT, but was shared by individuals who received it through the UT online scheduling system when the link was intended only for the use of individuals who had completed an online eligibility survey and who fit the 1A or 1B vaccination prioritization criteria as designated by the Texas Department of State Health Services."

This incident comes after Austin Public Health (APH), a partner with UT Health Austin, announced it needed to delay vaccine appointments due to the winter storms.

APH told KVUE on Monday that anyone who has had their second COVID-19 dose from the agency bumped past 42 or more days may temporarily walk up to vaccination sites and get their second shot. However, during this time of allowed walk-up appointments for patients meeting the criteria, APH said it recommends those people call 311 to receive information on sites that are open on a given day.

Over the weekend, local officials held a 3,000-dose mass vaccination trial run at Circuit of the Americas. Leaders say they hope to eventually give out 50,000 doses each week.

Pflugerville ISD to pay employees to get COVID-19 vaccine