Demand for the COVID-19 vaccine has suddenly dropped, and some providers have stopped ordering the shot. What does that mean for herd immunity? 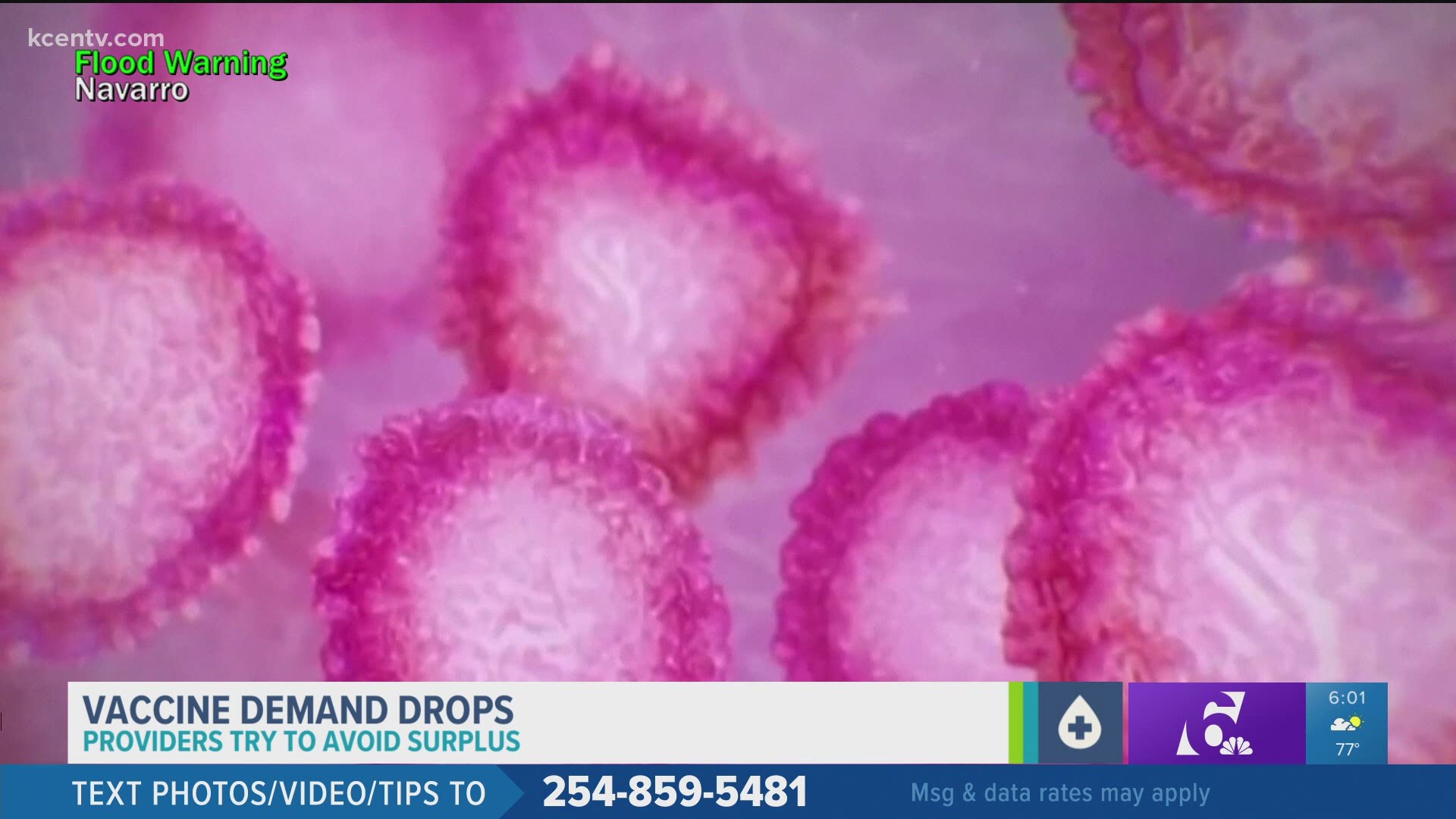 TEMPLE, Texas — As of Tuesday, according to the Texas Department of State Health Services, nearly 50 percent of Texans 16 years and older have been vaccinated against COVID-19 with at least one dose.

If all of those individuals get their second dose as well, that leaves around half of vaccine-eligible Texans immune to the virus.

Half is, unfortunately, not enough for herd immunity.

At the same time, vaccine demand in some Texas community has begun to plummet. In Bell County, the health district hasn't asked for a new vaccine shipment in two weeks.

Bell County Public Health District Director Amanda Robison-Chadwell said the the demand seemed to vaporize in the middle of April.

"We had a pretty consistent demand and then a couple weeks ago we had trouble filling appointments. It was right around the time that Curative started running their clinics," Robison-Chadwell said.

Bell County is not overstocked at this point, Robison-Chadwell said, but the county has been hesitant to order more.

The Waco-McLennan County Public Health District has continued to see some demand, but the waitlist that once had 50,000 people now has almost none at all.

Spokeswoman Kelly Craine said there is virtually no wait to get the shot at this time.

The limited demand is forcing providers to work even harder to try to make the vaccine accessible. The goal is to get the state to a point of herd immunity, though it's difficult to say exactly what that point is.

"The number I've herd consistently is 70 percent or greater," Robison-Chadwell said. "We've got a long way to go before we get to that."

The Texas DSHS could not commit to a number for herd immunity on Tuesday. Press Officer Douglas Loveday explained several concerns the state has when defining when herd immunity will arrive, as well as the seriousness of not reaching it.

"We can’t say that there is a specific number of people who need to be vaccinated because more research is needed to understand the length of time vaccines provide immunity, as well as the length of natural immunity from getting COVID-19. We are urging people to get vaccinated to reduce the number of new virus variants," Loveday said in an email. "The threat of new variants is a real motivator to get as many people vaccinated as possible so the virus won’t have as many opportunities to potentially mutate into something more severe."

Robison-Chadwell also told 6 News the biggest concern with failing to reach herd immunity will be a new variant.

"We've already seen a number of these variants emerge that have been able to break though the vaccine. We haven't seen when that's really dangerous, but the more chance the virus has to move in the population the more chance it has to mutate," Robison-Chadwell said.

Officials worry that the more people get infected, the more chances the virus could turn into something that COVID-19 vaccines will not longer catch, leading to an even worse resurgence of the virus.

"All of the vaccination effort will be for naught because we suddenly have a variant of this virus that escapes all the vaccine efforts," Robison-Chadwell said.