All 4,000 COVID-19 vaccines distributed out to the Coastal Bend

Another 4,000 are scheduled to arrive Monday, Jan. 18. The health district said if they arrive on time, another drive-thru clinic could happen on Tuesday, Jan. 19. 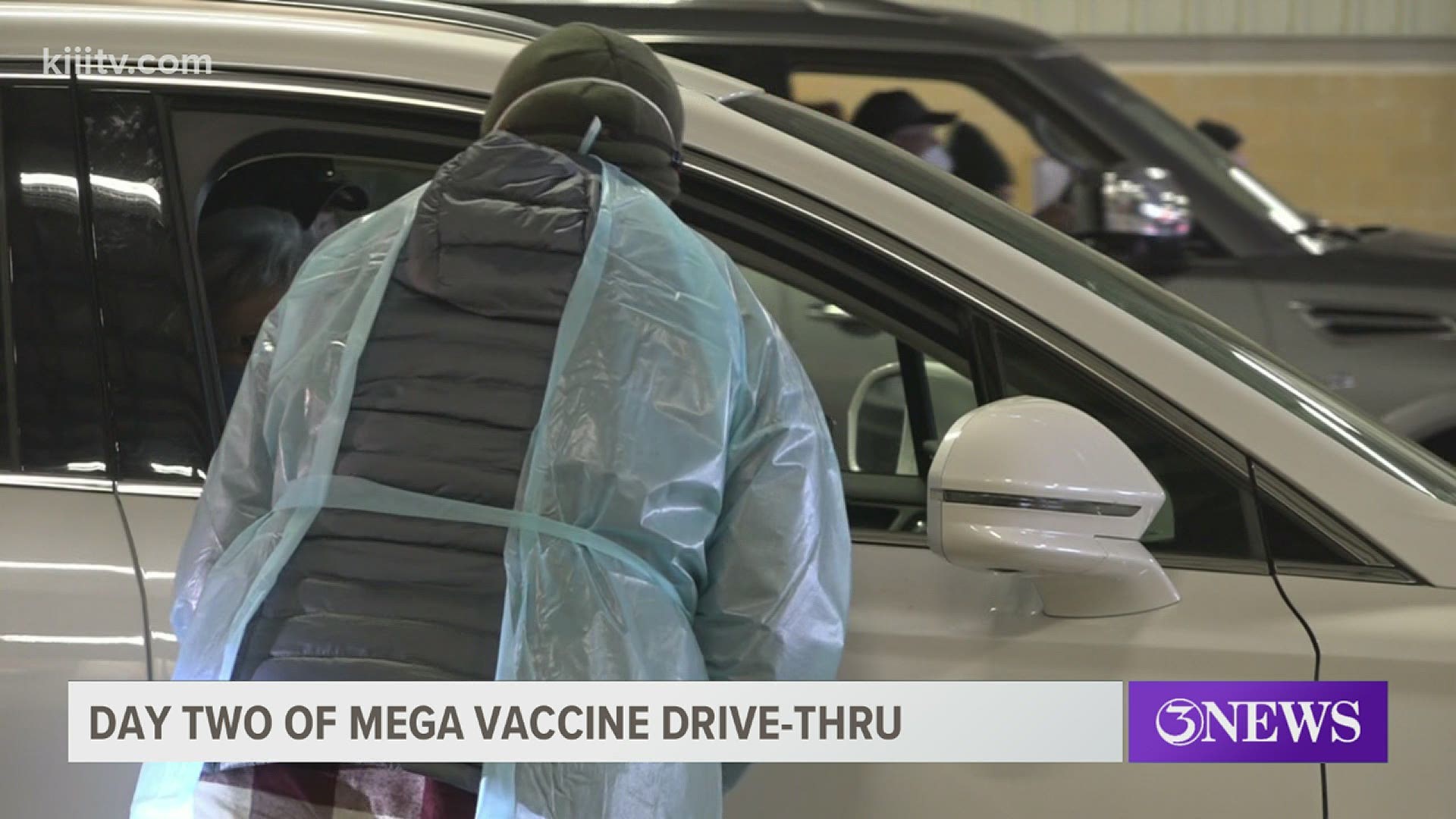 The first mass vaccine distribution ended Tuesday afternoon around 3 p.m. Volunteers exhausted all 4,000 vaccines that were delivered to the Coastal Bend Monday earlier than expected.

"We had a two and a half hour wait; they've done an amazing job. Very organized and what I thought was pretty quickly," said Darlene Teat, a recipient of the Moderna vaccine.

That was a sentiment felt among many other people who also received a shot Tuesday with shorter wait times and lines compared to Monday.

"We knew we were going to wait so it wasn't that bad," said Rolando Garcia, another recipient of the vaccine.

People began receiving their shots around 8 a.m. The county started with about 2,000 vaccines to give out after Monday's distribution.

"I'm just happy that I already got it. Now, I'm on my way, you know I got my card to get it next month and I'll be here or wherever I need to go the next time," said Maria Perez, a vaccine recipient.

Perez said it was about a two hour wait before she reached the front of the line, but it was certainly worth it.

Community members and county leaders looked ahead to when the next mass shipment of vaccines was expected to arrive in the Coastal Bend.

"The state's been talking about us and they're hoping to keep us on a weekly allocation very similar to this week. So, in our mind we're thinking maybe Monday, maybe we'll receive another 4,000 doses," said Annette Rodriguez, Nueces County-Corpus Christi Public Health District Director.

All 4,000 vaccines that were sent by the state have been administered into the community.

Nueces County health officials have vaccinated more than 1,100 people on Tuesday morning on the second day of their mega vaccine clinic.

They hope to vaccinate more than 2,000 Tuesday.

Several community members were in line to get the vaccine today, including 3News' Joe Gazin. 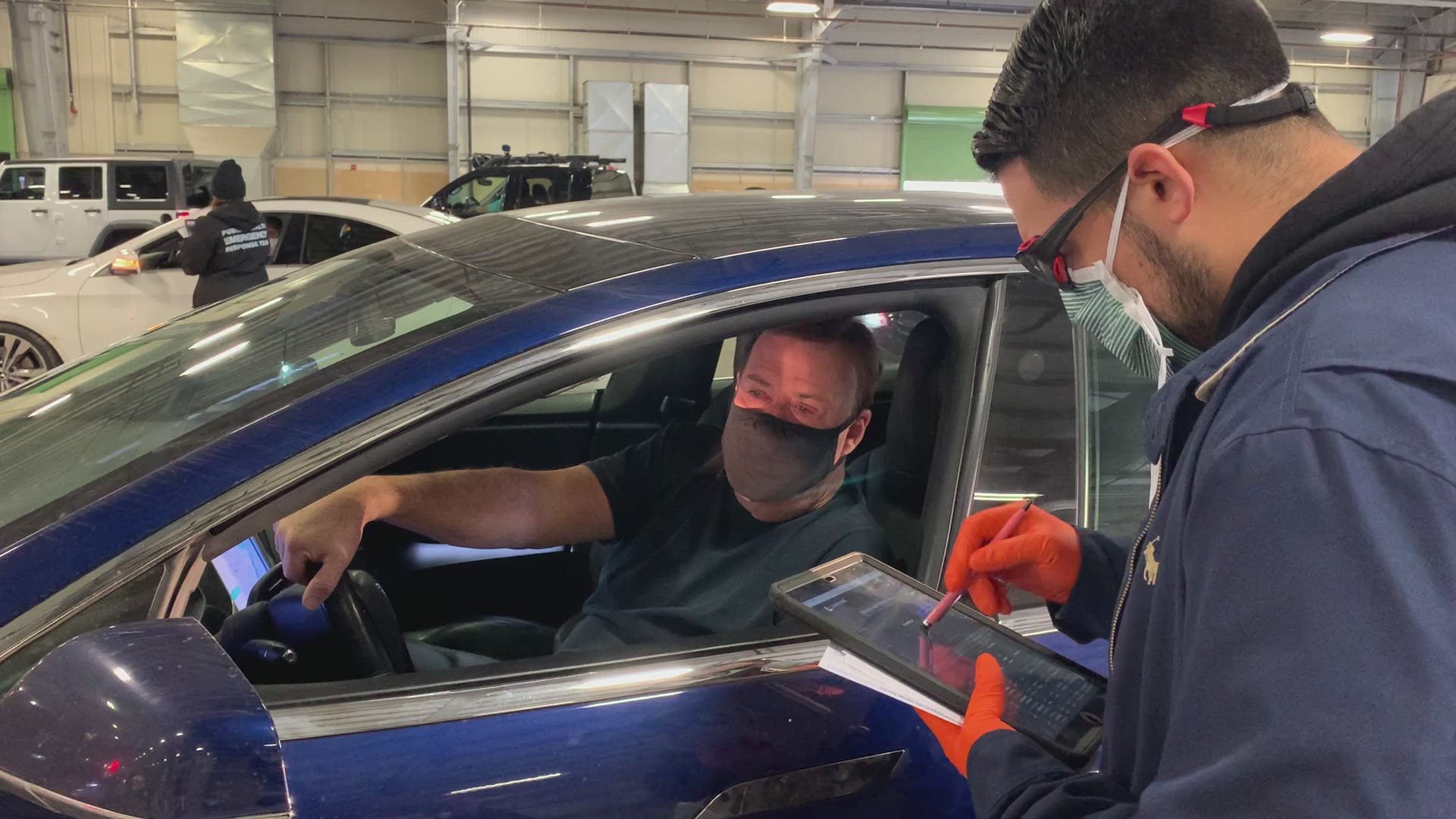 Many of your neighbors took advantage of the Nueces County Health District's COVID-19 vaccination drive-thru on Monday.

Folks began lining up early in the morning Monday, but the mega vaccination effort, which was set to begin around noon, was delayed for nearly three hours.

At one point, cars were backed up as far back as Highway 77.

The event got underway later than expected after a delay in the latest shipment of the Moderna version of the vaccine.

The county came up with a plan B.

They asked HALO Flight which happened to have a helicopter crew in San Antonio to pick up the vaccine there. The team at HALO was more than willing to help, but the county ended up changing their minds.

Instead, Canales said they would wait for the ground shipment of the vaccine and in the meantime, they petitioned the state for an emergency transfer of vaccine from the Amistad Community Health Clinic.

They received 200 doses which were administered in the first 15 minutes.

The expected shipment of 4,000 doses arrived shortly after and staff started giving those out.

"This operation here is one of a kind in the country. Nobody is aware of anyone who can vaccinate as quickly as we can here today," said Corpus Christi City Manager Peter Zanoni.

Among those who received the vaccine were folks not only from Nueces but also surrounding counties who qualify. People who are part of phase 1A and 1B.

For people who couldn't pre-register online, many others did so in-person.

"If you can't register at home, we have staff here. As they drive here, they check them in, and drive forward and get the vaccine," said Zanoni.

The line so long, officials ended up having to cut off new vehicles from showing up just after 4 pm.

Zanoni said they had planned to administer 500 doses of the vaccine. At the end of the night, the number more than tripled to 1,645.

RELATED: What we know about the man who traveled to the U.K. and tested positive for the coronavirus variant in Nueces County

Registration has been filled for people who pre-registered to receive the Moderna COVID-19 vaccinations on Tuesday, January 12, the city announced Monday evening.

A vaccination drive-thru for Wednesday, Jan. 13, has been cancelled after all vaccines were given Tuesday.

ICYMI: The Corpus Christi – Nueces County Public Health District would like to inform the public the online pre-registration has been filled for individuals pre-registered to receive COVID-19 vaccinations on Tuesday. https://t.co/ERH7st0MkX

4,000 doses of the Moderna COVID-19 vaccine arrived in Corpus Christi about an hour late, health officials said. The vaccines were expected to be ready to give to those who registered at noon, but that time was pushed back.

Nueces County Judge Barbara Canales said that comfort stations were set up for those who have been waiting since before sunrise. 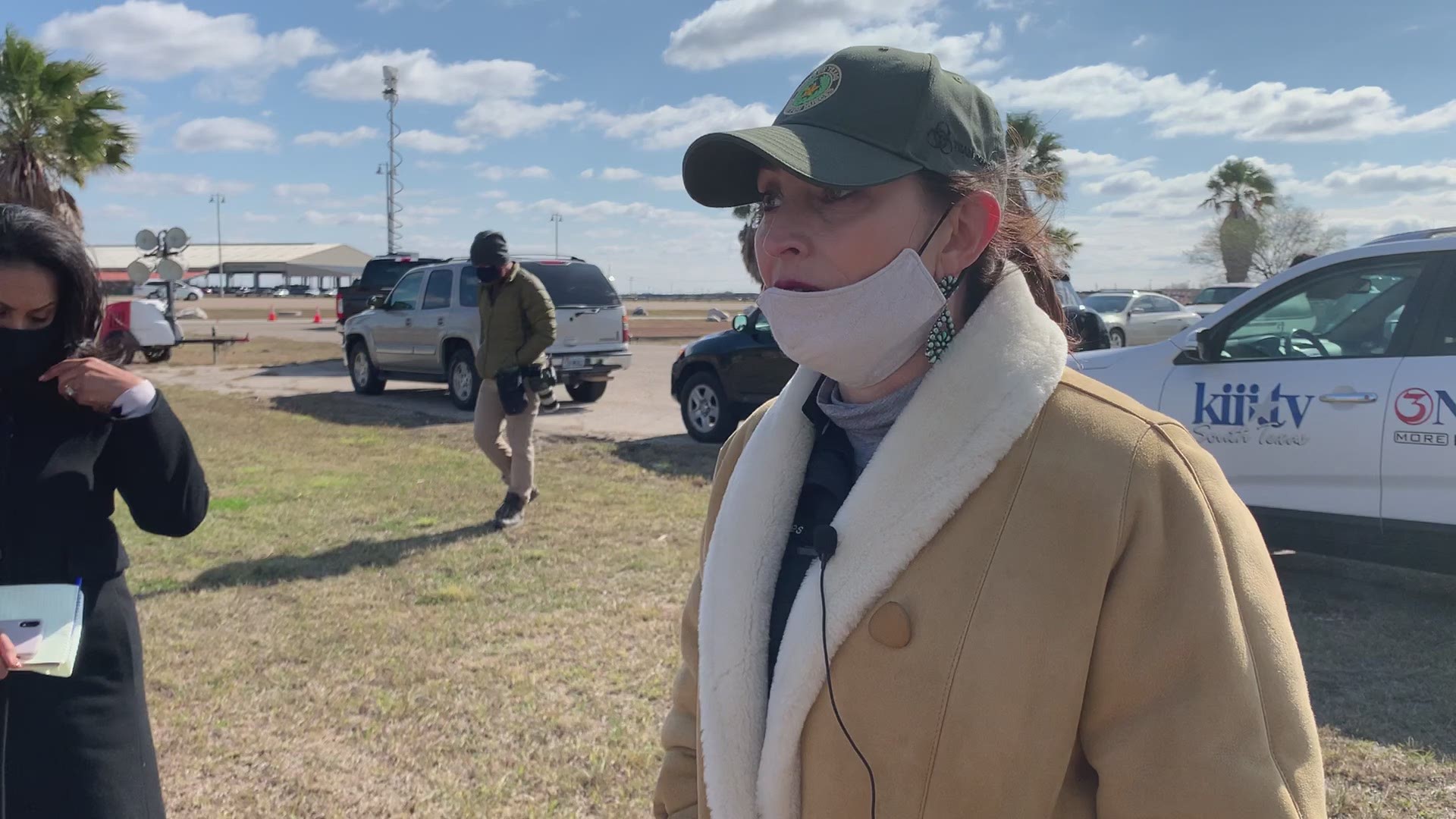 The shipment came from San Antonio.

A mega vaccination clinic took place at the Richard Borchard Fairgrounds for groups Phase 1A and Phase 1B.

A registration website opened yesterday to fill 250 appointment slots for the clinic today. Those slots filled up very quickly, but you can still go and register on-site at the Richard Borchard Fairgrounds at 1213 Terry Shamsie Blvd. in Robstown.

The clinic is open to all surrounding counties.