The CDC, FDA and Texas health officials have launched an investigation. 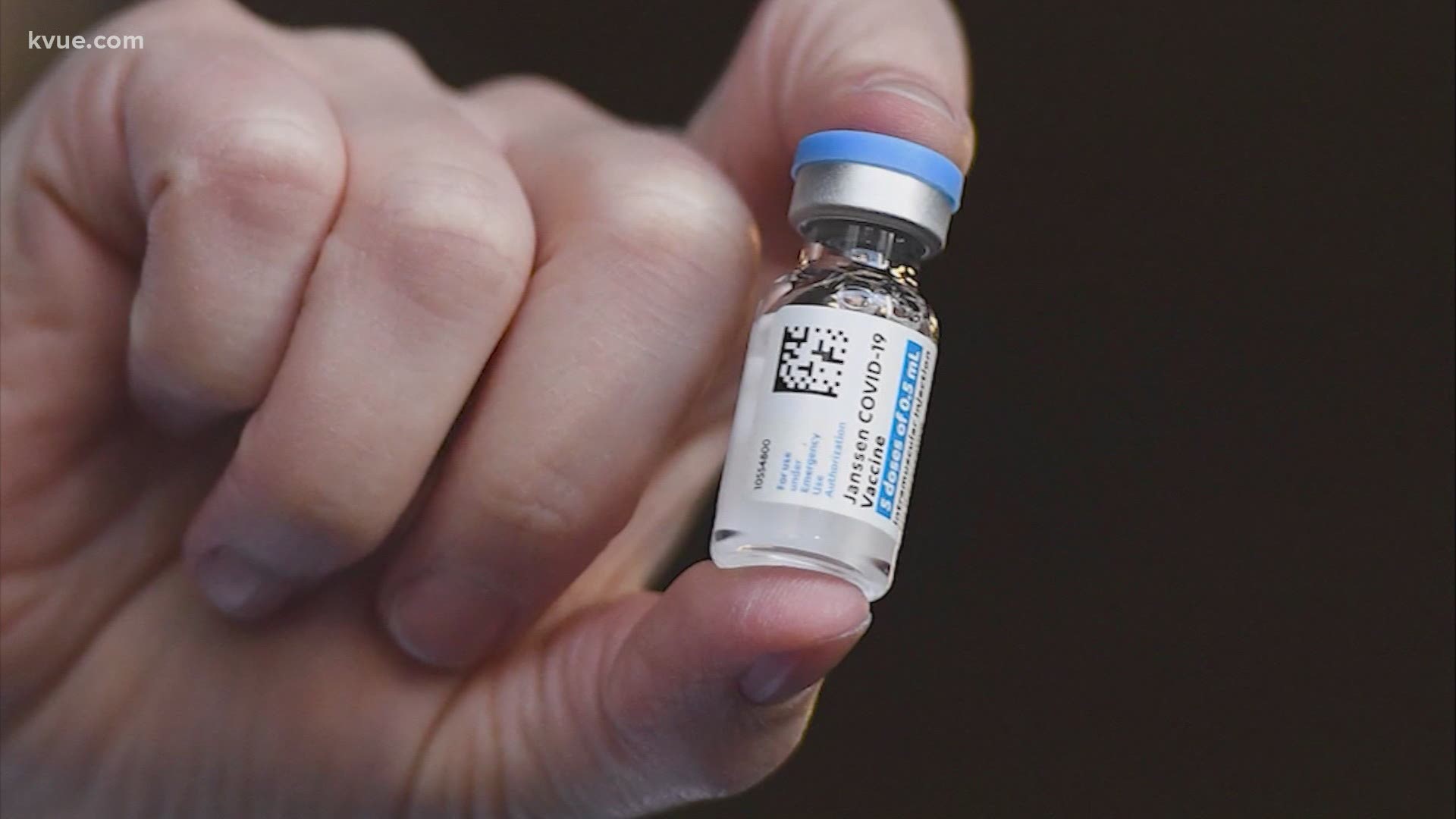 TEXAS, USA — The Food and Drug Administration (FDA), Centers for Disease Control and Prevention (CDC) and Texas Department of State Health Services (DSHS) are investigating after a Texas woman was hospitalized after receiving the Johnson & Johnson vaccine.

This comes as distribution of the vaccine remains on pause after six women developed blood clots after receiving the shot. With the U.S. pause of Johnson & Johnson’s COVID-19 vaccine stretched into a second week, the Advisory Committee on Immunization Practices is scheduled to meet from 11 a.m. to 5 p.m. Eastern Friday to discuss the J&J vaccine and potential updated recommendations.

"We were notified yesterday afternoon of a report through VAERS about a possible case in Texas," a DSHS spokesperson told KVUE on Thursday. "The patient is an adult female who was hospitalized after receiving the J&J vaccine with symptoms that appear to be consistent with those few other reported cases."

Officials would not provide details about the case in order to protect the privacy of the woman involved. However, they said the CDC and FDA will be gathering more information and how they will include the case moving forward with the next steps.

"It's important to remember that just because something is reported it doesn't necessarily mean that it was caused by or linked to the vaccine," said Imelda Garcia, DSHS associate commissioner for laboratory and infectious disease services and the chair of the Expert Vaccine Allocation Panel. "All adverse effects following vaccinations should be reported to VAERS at vaers.hhs.gov."

New: @TexasDSHS says last night the CDC told them Texas has one new case of blood clotting in a woman believed to be related to Johnson & Johnson vaccine.

Imelda Garcia: "It doesn't necessarily mean it's caused by or linked to the vaccine"
(@wfaa)

The CDC said any new confirmed cases will be updated Friday at the Advisory Committee on Immunization Practices meeting.

Earlier this month, the State of Texas ordered all vaccine providers in the state to pause administering the Johnson & Johnson vaccine until further instruction from the FDA due to the vaccine potentially linked to rare blood clots.

At least six cases of unusual brain clots were reported among women six to 13 days after vaccination. All six of these women were between the ages of 18 and 48.

People who received the Johnson & Johnson vaccine and experience symptoms like severe headache, abdominal pain, leg pain or shortness of breath within three weeks after vaccination should contact their health care provider.

KVUE spoke to Dr. Ari Brown, a longtime pediatrician in Austin, to talk generally about the recent few cases of blood clots across the country following a Johnson & Johnson dose of the COVID-19 vaccine.

State health officials said 616,000 doses of the Johnson & Johnson vaccine have been administered in Texas so far, with more than 6 million doses that have been given across the country. Dr. Brown said the few cases that have been reported are signs that the vaccine adverse reporting system is working.

"So to put things in context, it's important to say, 'Wow, our vaccine adverse reporting system works,' because this is almost a needle in a haystack. This is less than one in a million as far as the risk. And so this has been identified, and that's the reason there's been a pause to make sure that this is ultimately a safe vaccine to give, which it looks like it is," she said.

In general, she encourages people to get the COVID-19 vaccine, and said the benefits of getting a shot outweigh the risks of not getting one.

"If you look in the very broad scheme, these vaccines are extremely important in protecting all of us worldwide against this horrible disease. And that's really the important question mark, is the risk-benefit analysis and how rare these potential side effects are, and how can we potentially limit those side effects to people who may be more at risk for them," she said. "While there is a pause on the Johnson & Johnson vaccine, please don't wait to get the vaccine that you can get."

Overall, she said if people are hesitant about getting the vaccine for whatever reason, to talk to their health care provider.