In just a matter of minutes, an F5 tornado with wind speeds of over 300 mph killed 114 people and injured about another 600. 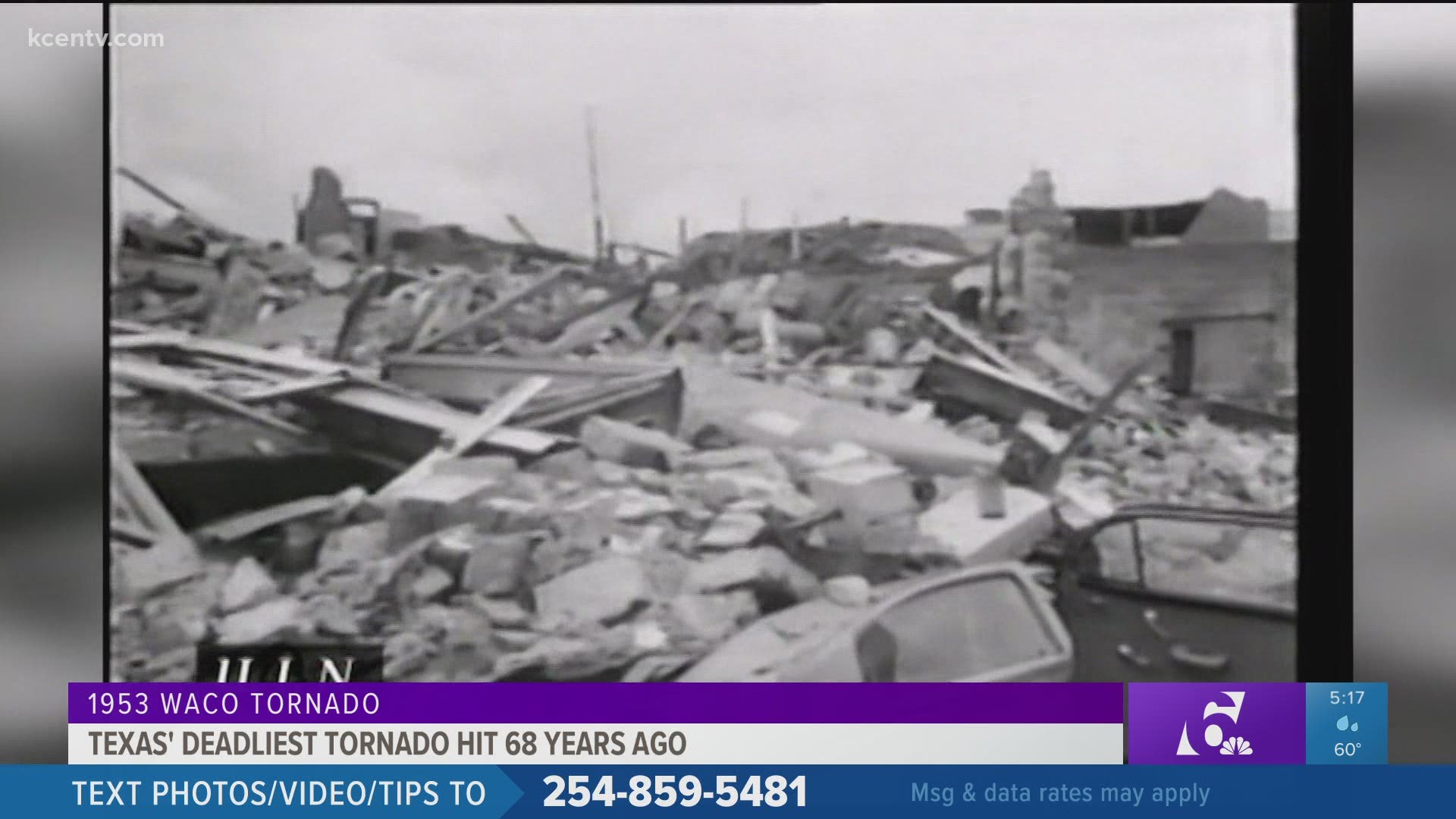 WACO, Texas — What started as an ordinary warm day on May 11, 1953 turned into a deadly one after an F5 tornado made a direct hit on Waco.

In just a matter of minutes, the tornado that was believed to have wind speeds of more than 300 mph killed 114 people and injured about another 600.

It transformed homes and businesses into rubble and dust, reshaping Waco's landscape and causing a whopping $50 million in property damage, or just over $487 million today.

Today, the Waco Tornado remains one of the deadliest tornadoes in U.S. history.

Despite severe thunder storm warnings with the possibility of tornadoes from weather forecasters, many Wacoans believed the city was tornado proof, thanks to an over century old legend.

According to the Huaco Native American legend, the Waco area was safe from any violent storms -- like tornadoes -- because it was in a valley, according to Waco History.

"We were always taught the Indians settled here, made their first home here because there would not be any tornadoes... off the cliffs of the Bosque and Brazos river, you see," resident Grace Hasseltine Jenkins Garrett Kee said in an audio recording found on Waco History. "I never thought about a tornado."

Of course, it didn't help when a local forecaster lifted the warning at 1:30 p.m. in his report, saying there wasn't a cause for alarm to the public, The Waco Tribune reported.

Still, school districts throughout the Waco area let out students and staff due to the possibility of severe weather.

Harry Gillett, a teacher in Waco at the time, documented weather conditions in a letter to his mother from his home in North Waco, according to Baylor University's "The Texas Collection."

"It has gotten so dark outside that it is practically night and it is only about 4:25 [p.m.]," Gillett wrote.

Gillett noted that a funnel cloud then formed and touched down within the area at 4:32 p.m. The Tribune said it traveled north through Lorena and Hewitt first, ripping up farm lands and tossing buildings while gaining in speed and size.

"Now two blocks wide, with a sound that was later described as a buzz saw chewing through wet lumber, it crashes into downtown at 4:36 p.m., turning cars into missiles, straw into darts and pebbles into shrapnel. Buildings tumble, bricks rain down, power lines fall into the streets and the vapor lamps go dark," the Tribune reported.

Martha Roanne Lacy Howe was in the fourth grade at the time. In an audio recording by the Institute for Oral History, she recalled she was on the other side of the "Old Lake" when she saw it.

"I remember it, I will never forget it," Howe can be heard saying on the recording. "That tornado came right over this hill and you could see it going across the [old] lake and it made a little "v" like a waterspout. It was unbelievable. It [came] right across the lake kind of toward us and went toward the [Old] Dam. And so, as a young girl, when you see a tornado like that, you remember it and I remember it well."

Several reports say it was gone before 4:40 p.m. The only evidence that a tornado breezed through violently was the sheer amount of destruction it left behind.

As seen in pictures of downtown, bricks and rubble filled the streets, cars were flipped over or ripped apart into metal slates and some streets became dangerous waterways with downed powerlines slithering in the ripples.

Gillett noted the areas hard hit in his letter.

"Waco had the most horrible storm you can imagine," he wrote. "South Waco, downtown Waco, East Waco were the hardest hit."

"R.J. Dennis [in downtown] fell in completely and most of the buildings from there to a ruin," he added.

(In 1953, R.T. Dennis and Co. was a long-standing furniture business. However, after a 70-year run, they had to close up shop after the tornado destroyed the building and their company, according to Waco History.)

Overall, it created about $50 million in property damage, which equates to over $487 million today.

Luckily, only a shingle from his home was damaged by hail, he wrote to his mom.

1 / 8
The Texas Collection, Baylor University
An aerial photo showing before and after the storm.

As you can imagine, the Waco Tornado had a significant impact on the city, especially with the landscape, Dr. Stephen Sloan, the director of the Institute for Oral History and associate professor in the Department of History at Baylor, told 6 News.

Sloan noted that it was "devastating to the downtown economy of Waco and the community suffered great loss of life," he said.

"It left a long impression on the community of Waco, with traces of impact that are even visible today," he added.

In downtown, old photos show City Hall functioned as the central hub for the city with hundreds of businesses surrounding. Austin Avenue was a popular shopping street, but that changed after the tornado. Most people didn't return to shop there, the Tribune reports.

Most people started moving into the suburbs after the tornado, too.

"I see the [tornado] as a turning point in modern Waco, not just in the changes in downtown, but in the push for growth in suburban areas – Woodway, etc.," Sloan said.

Of course, there are many who believe the tragic event created a closer-knit community at the time.

"It also became a landmark event for longtime Wacoans as a shared tragedy that plagued many but became a focal point of collective memory," he said.