A viewer sent KHOU 11 several videos of the tiger in a Memorial neighborhood on Mother's Day. 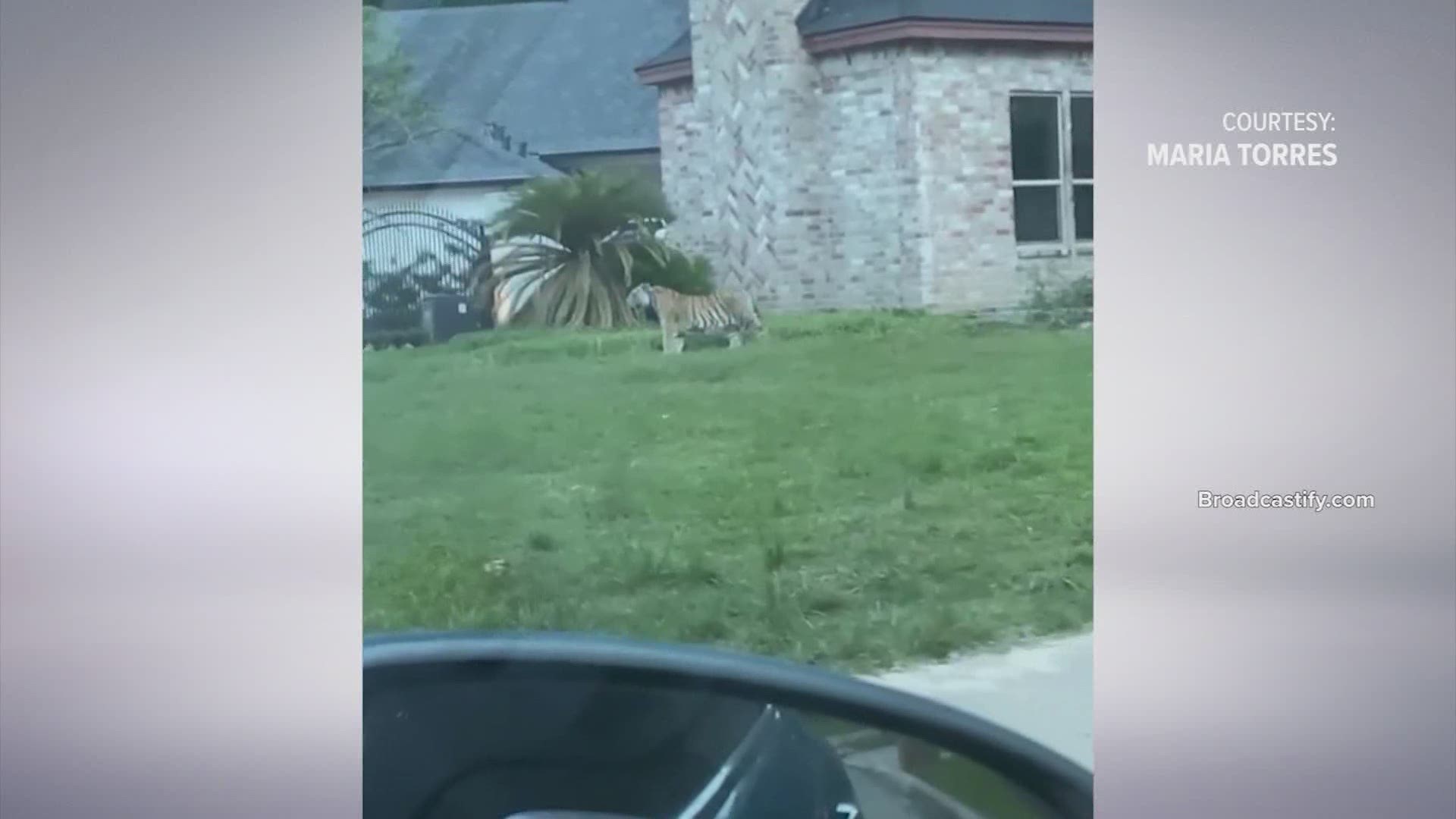 HOUSTON — We're following the very latest after a tiger was found walking around a yard in a west Houston neighborhood.

A viewer sent us videos of a tiger Sunday night. It was wearing a collar and was prowling around a front yard until someone came out of the house and brought it inside.

Houston police got the call around 8 p.m. at a home on Ivy Wall Drive, near the intersection of Highway 6 and Memorial Drive.

In one of the videos, a man is seen in the front yard holding a gun while yelling at the person, who was taking the tiger inside. That man was later identified as an off-duty sheriff's deputy.

"This is about a tiger. I'm on the phone with the caller, who is a sheriff's department sergeant, and he's holding the owner, and the owner is trying to leave," said Houston police dispatchers in audio captured by Broadcastify.

Witnesses said the tiger was later put in a vehicle and taken away before police arrived.

The deputy emphasized he only pointed his weapon at the cat, not people, to keep the neighborhood safe.

KHOU 11 was alerted to this story by viewer Maria Torres, who sent us video.

This is the second time in the last couple years there's been a tiger sighting in Houston. Back in February of 2019, a tiger was found in an abandoned home in southeast Houston and eventually moved to an undisclosed sanctuary in Texas.

This is Jose Ramos — he’s the neighbor who FIRST spotted the tiger across the street from his house in a yard — called 911, snapped a pic of the big cat CAREFULLY, and then alerted his neighbors by posting on neighborhood blog. @KHOU #Htownrush pic.twitter.com/ewMHQ0A2qs

Can you legally own a tiger or other exotic cat in Texas?

As reported in 2019, while tigers are not allowed in the City of Houston, they are legal in the surrounding unincorporated Harris County if their owners register the animals and follow a strict set of rules, including holding $100,000 in animal insurance and keeping the tiger secured at least 1000 feet from another home, school, or child care facility.

Texas law allows private ownership of tigers and other “dangerous wild animals”, as long as applicants register with their local animal control or sheriff, provide a paperwork copy to the state, and follow caging requirements.

READ: Does Texas law allow residents to have tigers?

Sunday night's tiger sighting is the latest in a string of unusual animal sightings in southeast Texas over the last couple weeks.  At the end of last month, Traffic was at a crawl because of a cow on I-10 East. It was eventually wrangled and moved out of harm's way.

Later that same day, an alligator was spotted on the Fred Hartman Bridge. How it got up there is anyone's guess, but it was causing traffic delays between La Porte and Baytown.

And then a few days before that, a resident in Willis captured this image on the family's Ring camera after a heavy rain.