"We’re providing them with all the tools we can," a Texas Department of Criminal Justice spokesman says. 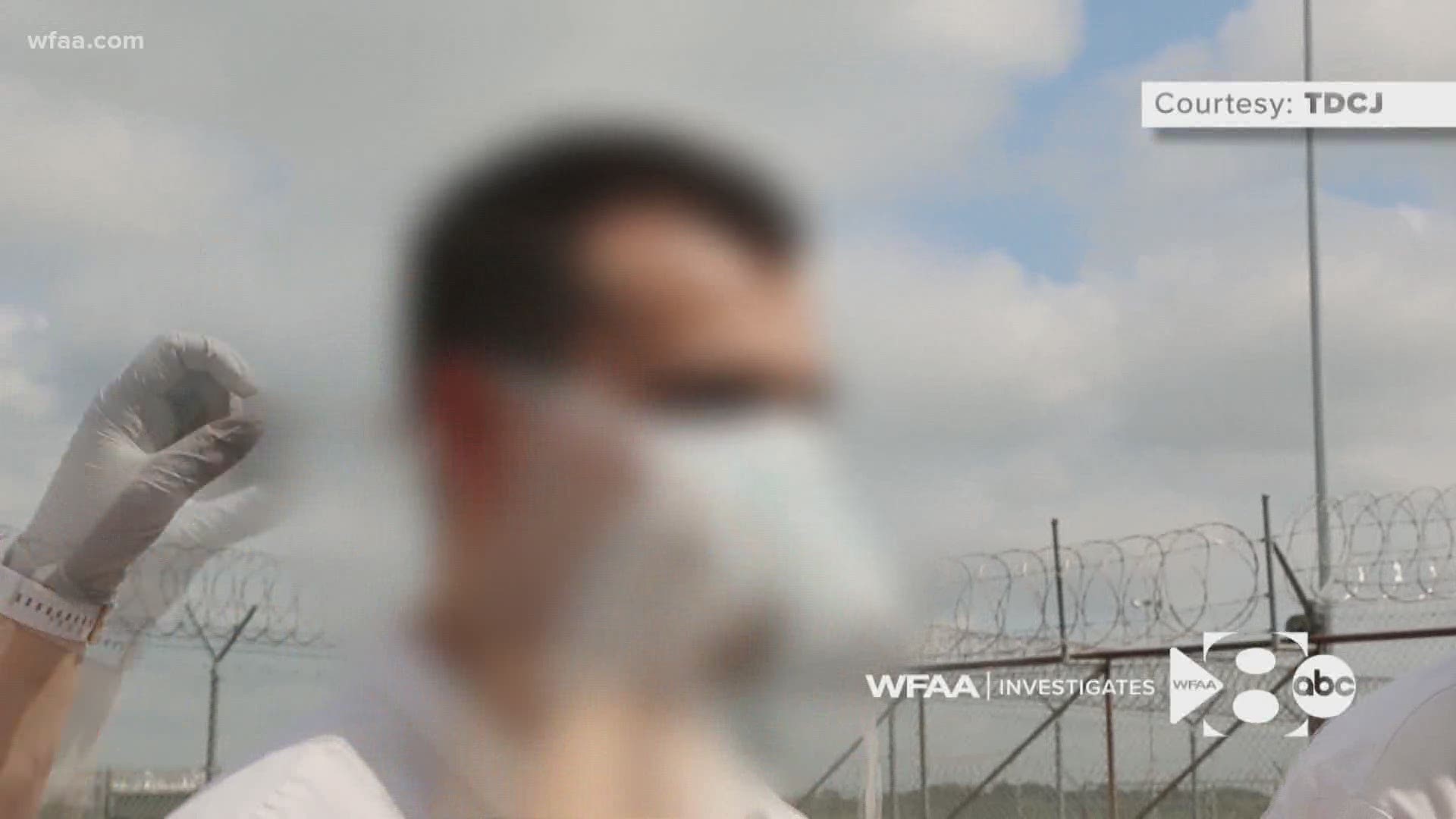 DALLAS — Behind the walls of the Hutchins State Jail in southern Dallas County, the inmates are afraid they will contract COVID-19.

So are the correctional officers.

“I’m scared every day. I’m very, very, very scared,” said a Hutchins correctional officer, who asked that his identity be concealed. He asked to remain anonymous because he fears losing his job for speaking out about conditions inside the prison.

He and other correctional officers told WFAA the Texas Department of Criminal Justice, which runs the state’s prison system, was too slow to stop accepting prisoners from county jails and has put employees’ lives at risk by continuing to send guards assigned to work at one unit to other units.

They also say that they are being asked to wear the same masks for days and sometimes weeks on end.

“It’s not good for anybody, both for the officer and the prisoners,” the Hutchins guard said.

Right now, Hutchins is one of 44 Texas prison units under precautionary lockdown because inmates and guards have tested positive for COVID-19.

Statewide, 59% of the state's 106 prison units have active cases. More than a 1,000 prison workers and 7,200 inmates have now tested positive for COVID-19, according to the latest figures. Seven prison workers and 46 inmates have died of complications related to COVID-19. The deaths of 33 inmates are pending a final determination of cause of death.

“The direct actions of the agency is causing it to be spread,” a correctional officer from an East Texas unit told WFAA.

He and other correctional officers, all of whom requested anonymity for fear of retaliation, questioned why TDCJ was so slow to stop movement of prisoners from the county jails and is still moving guards among prison units.

“They were just business as usual,” the East Texas officer said. “We should not work one facility and then another one and then back and forth and back and forth.”

Amanda Moon’s husband, Jerry Don, is one of the inmates at the Hutchins unit who tested positive.

Early on, he worried that he about getting sick because the prison kept bringing in inmates from the county jails. “He said the correctional officers were wearing masks and they weren’t offering them to the inmates,” she said.

In early April, he told her during a phone call that he had a fever and a cough – the telltale symptoms of COVID-19. She would later learn from another inmate’s wife that he had been put in quarantine.

For more than a month, prisoners were not allowed to use the phones and Amanda said she had a hard time finding out any information on his condition. She relied on the letters she received from him to find out how he was doing.

Her husband has since recovered and moved back into the general inmate population. She is now able to speak to him for five minutes a day.

“I worry that he’ll catch it again,” Amanda told WFAA. “I’m scared. I want to cry when I read his letters.”

Jerry Don Moon used one of his five-minute calls to talk to WFAA.

“There’s a lot of people getting sick right now in Hutchins,” he said. “As a matter of fact, they just retested a bunch of people. They had seven more people across the hall from me in quarantine that just tested positive again.

"These people didn’t take proper procedures as far as stopping this stuff from spreading. When … they decided to hand all of the officers’ masks, they should have as well given the inmates masks and they didn’t do any of that.”

He said when he first got sick, he had a 101-degree fever, a headache and lost his sense of smell and taste.

“This has got to be one of the most traumatic experiences of my life,” he said.

He said he was placed in an administrative segregation cell for 21 days, and only got one shower during that entire three-week stretch. The whole time he was in quarantine he said he was only given non-aspirin and cold medicines.

Throughout most of March, TDCJ’s executive director Bryan Collier said in videos on the agency’s website that there had been no cases of COVID-19. On a March 16 video, he said the system had an “ample supply of personal protective equipment on hand.”

He also said that employees were being told to discontinue all nonessential work travel, employee in-service training had been canceled and employees had been discouraged from traveling outside of the state.

On April 5, the agency announced that it had begun distributing cotton masks to staff members.

“The initial ones were a complete joke – just a single layer T-shirt with a piece of elastic in the back,” the East Texas correctional officer told WFAA.

On April 8 and 9, the agency announced that “effective immediately, any facility that has a positive offender or employee/staff COVID-19 test will be placed on lockdown. … Only staff that are assigned to those facilities will be allowed on those facilities.”

Correctional officers told WFAA that they interpreted that as an acknowledgement by the prison system that having staff work at more than one facility was spreading the virus.

“Offenders can’t get it unless someone brings it in,” said the officer assigned to an East Texas Unit.

Another correctional officer assigned to an East Texas unit told WFAA that in April, TDCJ was sending staff from units that did not have any cases to other units that were having outbreaks.

“Forcing staff members away from their families to work 14 days straight in an infectious environment is pure abuse,” he said in an email. “They were told ‘you go for two weeks or else you will be fired.’ Officers are having to choose between their jobs and their health, and the health and safety of their families.”

Hutchins correctional officers said they are routinely being sent to work at the understaffed Mark W. Michael Unit, located in Anderson County in East Texas.

“Even the scientists are saying you should limit your travel,” the Hutchins correctional officer told WFAA.

Desel, the prison system’s spokesman, confirmed that the driver did test positive. However, he told WFAA that the vans are limited to four people including the driver.

Still, correctional officers say dozens of Hutchins employees have been reprimanded for refusing to work at the understaffed unit. WFAA obtained one of those reprimands, which says, “You were instructed to travel to Michael Unit… You refused to do so.”

“I told them I’m not going,” said the Hutchins correctional officer. “I’m not going anywhere.”

Desel defended the practice of sending guards to work at different units.

But even TDCJ’s COVID-19 policy says that “if possible staff should be assigned to a single facility with limited assignments to other facilities only when necessary to provide essential safety, security and services.”

Desel said he did not agree that sending officers to work in other units could contribute to the spread of the virus. He also said that “statement is more specific to folks who are non-correctional officers assigned to units.”

The agency is required to “adequately staff its facilities regardless of where they may be so there may very well be times when people are moving or working at one location or another around our system,” he said. “As long as everyone follows protocols to the best of our ability and to their ability it shouldn’t be any more significant risk to work any one location or another.”

Correctional officers weren’t the only ones who were moved around the prison system late into the pandemic.

“Movement of officers, movement of inmates – this should have ceased early,” said Lance Lowry, a spokesman for the Correctional Officers Association of Texas. “You don’t have social distancing in prisons.”

But moving people isn’t the only concern.

Correctional officers told WFAA that well into March, they were being discouraged from wearing masks.

“Administrators were telling officers not to wear masks -- that they might scare the inmate population,” Lowry said. “They put officers lives in danger and officers have died. Officers are sick. Officers are hooked up to ventilators right now. Total incompetency.”

Lowry told WFAA he had encountered correctional officers guarding inmates who had tested positive for COVID-19 who did not have respiratory masks. He said they were within just a few feet of the sick prisoners.

“They told me they were issued a single N95 a month ago and expected for that to last that entire month,” he said.

A correctional officer assigned to TDCJ’s hospital in Galveston, where the sickest prisoners go, told WFAA that she worries about the lack of personal protective equipment.

“We need masks,” said the guard, who also asked we not publicly reveal her identity. “We need gloves. We need wipes to wipe areas down. We’re putting our lives on the line every day for this agency and the agency’s not taking care of us.”

“We’re doing a job that nobody else wants to do,” the correctional officer said.

Desel told WFAA that correctional officers have been provided the proper personal protective equipment to do their jobs.

“I know that we have significant quantities of all types of PPE,” he said.

At Texas Gov. Greg Abbott’s direction, the prison system has now begun widespread testing, more than a month after the outbreak began in the prison system. That testing continues throughout the state.

“We have a culture that does not like to change,” Lowry said, “and you cannot be resistant to change in situations like this.”