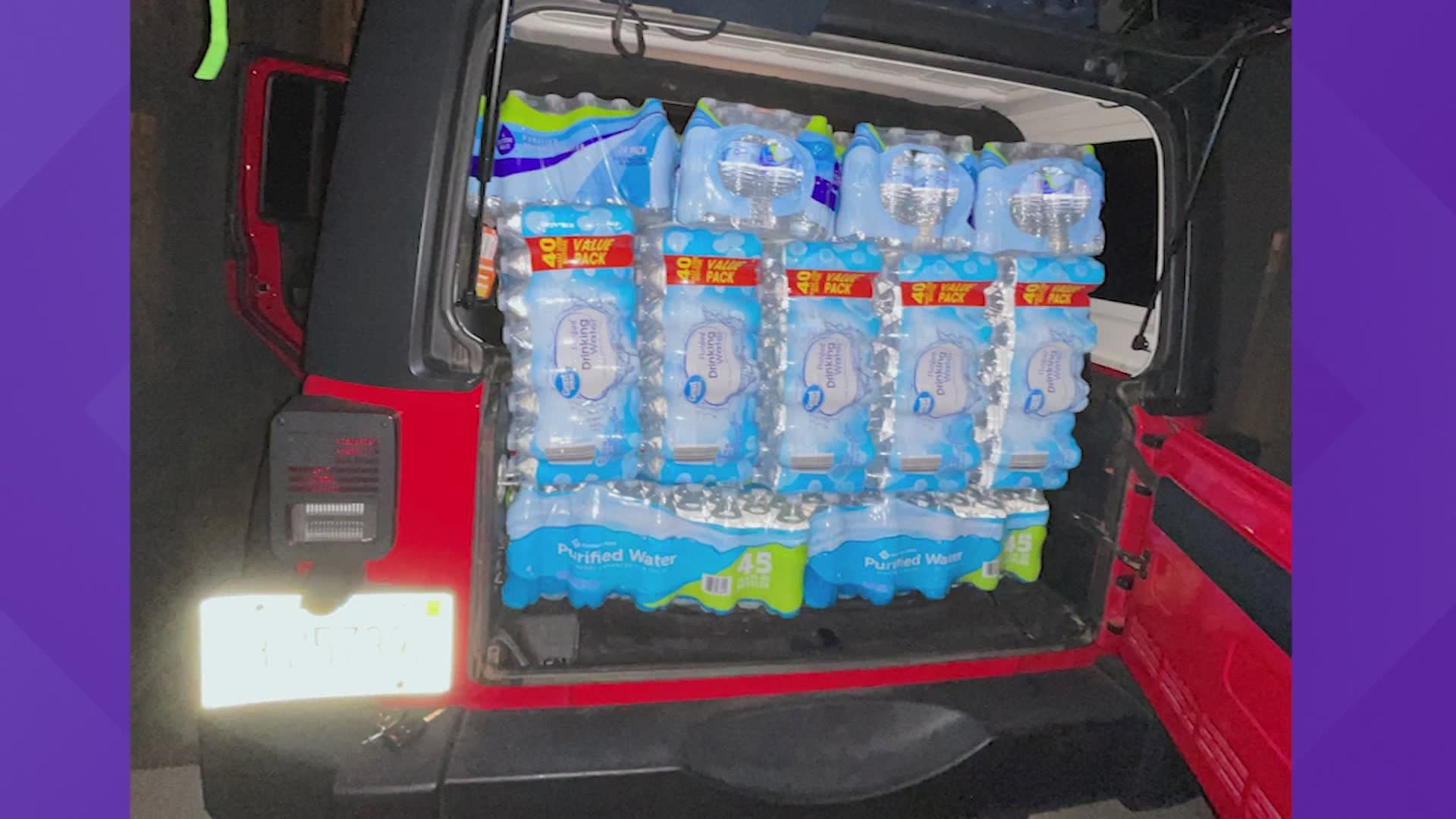 As the nation watched us struggle through that deadly freeze, a woman in Biloxi, Mississippi was called to action.

Adriane Kimbel may be two states away, but the 31-year old is Standing For Houston.

On February 19, Kimbel shared news articles about the destruction in Texas in a Facebook post that read, “If anyone has been wondering how you can help people in Texas, LET'S DO THIS.”

“It just means so much right now to be kind to other people and to treat everyone with respect and to show people that you care,” said Kimbel. “Instead of something happening and you just watch it happen.”

Kimbel’s Facebook post garnered a financial boost from family and friends. She used the money to buy enough bottled water to fill her Jeep and on Saturday, February 20, Kimbel drove west to Texas.

She first stopped in Beaumont, but Texans there said they didn’t need bottled water, so Kimbel continued west along I-10.

She used her phone to find a nursing home in Pasadena.

The facility took some cases of water and then connected her with Harris County Precinct 2 Commissioner Adrian Garcia.

“To have her drive hours, it’s just a remarkable statement about the heart of America, the soul of our nation," said Garcia.

Garcia pointed Kimbel to The Bridge Over Troubled Waters domestic violence shelter. The east Harris County facility flooded when a pipe burst during the winter storm.

“We house over 100 people on a daily basis,” said Olivia Rivers with the shelter, “what do we do with these people who are already fleeing such dangerous and horrific situations?”

DONATE TO: The Bridge Over Troubled Waters

Kimbel shared what she had in her Jeep then returned to her home in Biloxi, Mississippi and tapped into Facebook again, asking friends and family for donations to buy supplies and activity books for children staying at the shelter.

She returned with a packed SUV on Saturday.

“More cases of water and then we got a bunch of bottles and sippy cups are in this bag here,” said Kimbel as she showed KHOU 11 Photojournalist Ralph Nickerson what donations purchased.

Kimbel made sure to stick handwritten notes from donors in Montana, Kentucky, Nevada, Michigan and Mississippi on the supplies their money paid for.

NEED HELP: Learn More About The Bridge Over Troubled Waters

Whether you consider it divine intervention, fate or sheer coincidence, Adriane Kimbel found a way to connect Americans, kind of a like a bridge does over troubled water.

“I’m never going to stop helping people. If I can do it and I can get people to join me, I’m in.”