More than 3 million doses have been distributed across Texas. 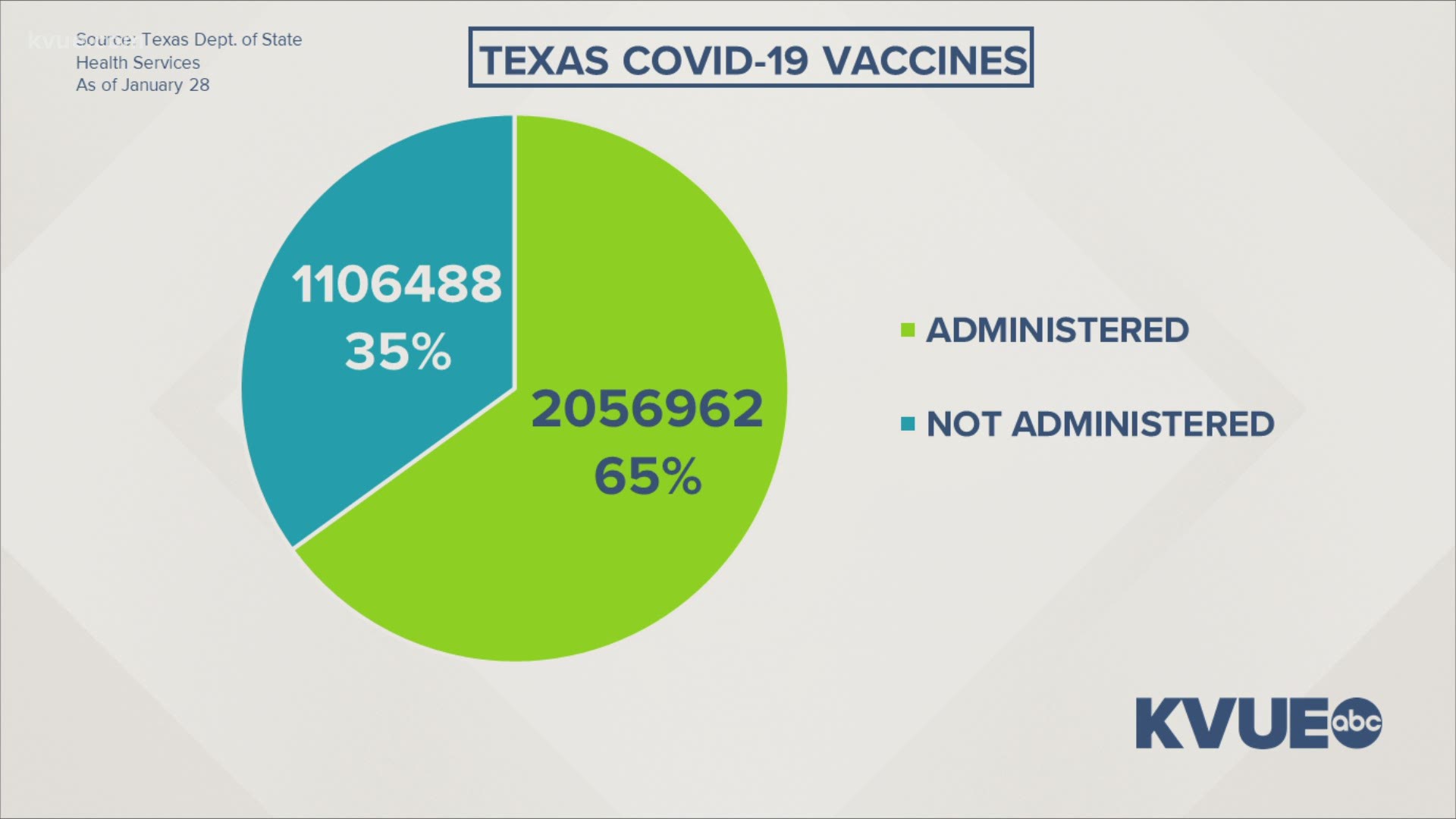 AUSTIN, Texas — Allocation and distribution of the COVID-19 vaccine has been a hot topic of conversation as health officials in the state have mentioned the demand for the vaccine outweighs the supply. And with that, issues such as temperature control have caused some vaccines to be discarded.

On Thursday, the Texas Department of State Health Services (DSHS) confirmed to KVUE "the total amount of doses wasted is less than 2,000 doses of the 3 million-plus doses shipped statewide.”

"The data will show the amount of doses wasted by facility," DSHS told KVUE in a statement. "This includes doses that were not able to be used because the provider’s refrigerator broke or was too warm, the person who administering doses touched the needle or dropped the syringe or vial, doses that spoiled because they were left out too long, etc. None of the doses can actually be expired yet because that is related to the date on vial at the time they were manufactured (most are good for at least 6 months frozen)."

One Austin provider, Orthopaedic Specialists of Austin, reported that 63 of 100 vaccine doses received from the state had to be wasted because the refrigerator they were kept in was too warm. The provider said to KVUE they were stored in the appropriate refrigerator, but the power cut out after hours one night, and the clinic had to throw out everything in the fridge.

"We will continue to practice the best policies and universal precautions of medicine," a specialist with the clinic told KVUE. "It is an unfortunate event that we hope to avoid in the future."

Other issues in distribution included a loophole that allowed some to be vaccinated before they qualified.

Austin Public Health Director Stephanie Hayden has previously mentioned doses were allocated to individuals outside of 1A and 1B "out of common courtesy" and to avoid wasted doses. Hayden later said that APH's allocation would be given by appointment only to those in 1A and 1B moving forward.

“We had people that were in the line, that had stayed in the line. So, out of a common courtesy, we decided to go ahead and provide that vaccine to them,” APH Director Stephanie Hayden said on Jan. 13. “We have to emphasize, going forward, that is not going to be the case.”

APH officials acknowledged back on Jan. 13 that these types of vaccinations have happened in small numbers, and they countered by saying no vaccine will be allowed to go to waste.

"Vaccine is not wasted if it is in the arm of a Texan," APH Authority Dr. Mark Escott said.

As of Thursday, nearly 1.7 million people have received the first dose of the vaccine in Texas. But officials from the DSHS say they're pushing for improvements to the process.

DSHS officials said they're pushing for more vaccines to be used, but they also want more doses from the federal government.

"We're not satisfied with the supply that we're getting. And so we continue to push from that regard that we will continue to work to improve how quickly we get it out. We'll continue to fight for us getting more vaccine to Texas,"  said Imelda Garcia, chair on the expert vaccine allocation panel.

Local musicians to play along Downtown Austin streets on weekends