Basic habits can have unexpected impacts from extreme heat, even when those habits are as common as bringing a salad to a barbeque or putting on a pair of sandals during the summer. 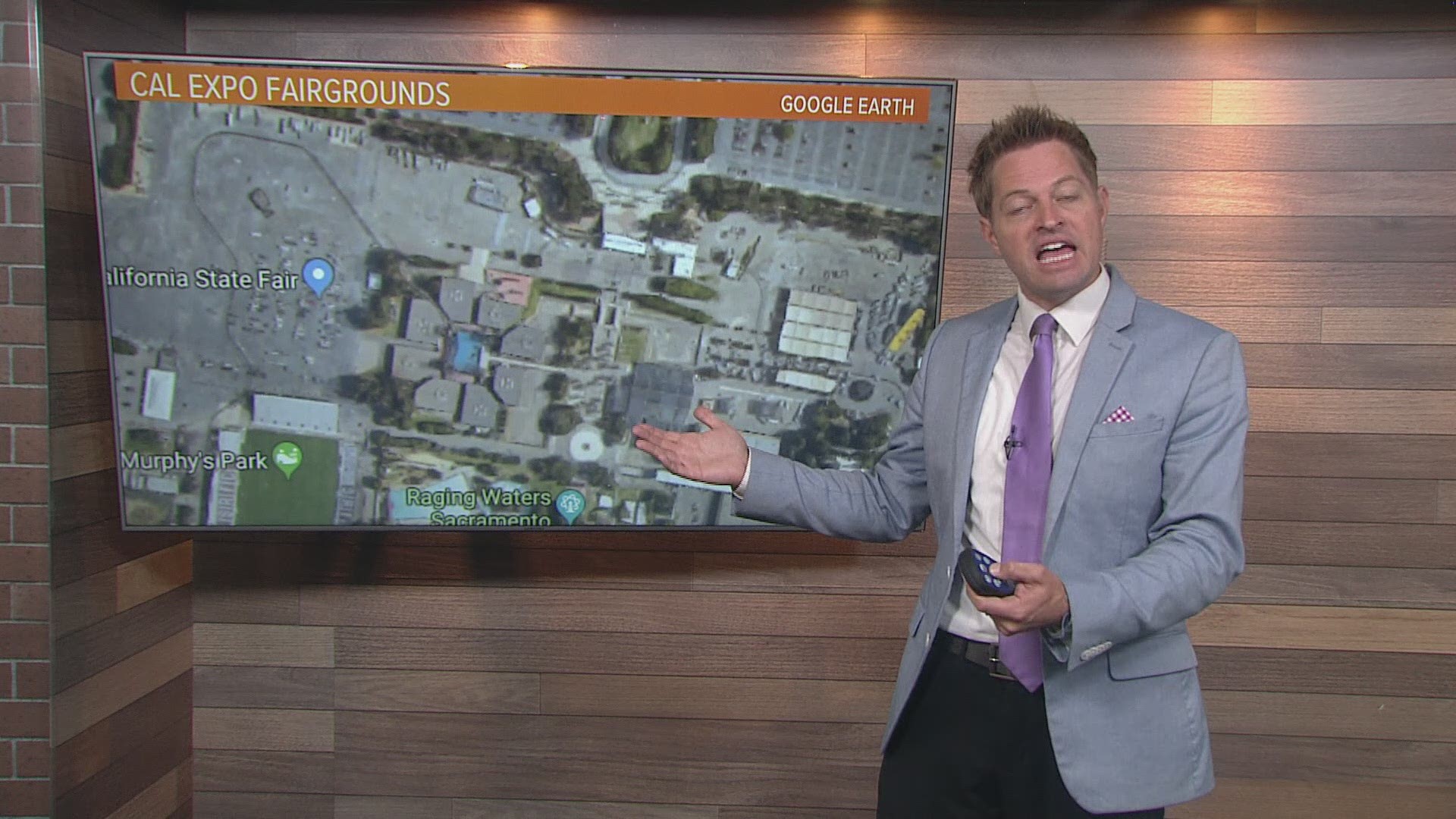 California will be heading toward triple digits due to the heat wave. This extreme heat takes a toll on local Sacramentans and sometimes even the actions and activities they normally do during the summer.

Basic habits can have unexpected impacts from extreme heat, even when those habits are as common as bringing a salad to a barbeque or putting on a pair of sandals during the summer.

Sometimes these common actions can yield uncommon concerns during times of extreme heat.

“Most people are aware of heat exhaustion and heat stroke, but most people don’t factor it into their daily activities,” said Dr. Jeff Rodgerson, an Emergency Medicine Physician at Kaiser Permanente in South Sacramento.

Extreme heat can cause cancellations of sporting events and other gatherings. According to Dr. Rodgerson, people should be planning their day to avoid doing things in the midday sun.

“When you’re talking about a heat wave, you really need to be planning your day in a way that can avoid doing things in extremes of temperature or in the midday sun. Those kinds of things, because everything from heat cramps to heat exhaustion to heat stroke- which is the killer of those three- it can create a real threat to your health,” said Dr. Rodgerson.

2. People can acclimate to warmer temperatures, but there are other factors

California is no stranger to heat waves in the middle of summer, but, even if Californians and Sacramentans are used to the average heat, there are a variety of elements to consider.

“There is some acclimatization that you can get, but I think humidity plays a big factor in it and certain work environments can also put people at huge risk,” Dr. Rodgerson. He added that the Sacramento area generally has low humidity, which he believes helps protect the residents.

Rodgerson suggested that as long as those in the Sacramento area stay hydrated, they generally do OK, however, there are exceptions for those with medical issues and medicines that may keep them from sweating. Work environments, extremes in age, and areas where people can be left exposed to the heat were also included as exceptions.

“I think that when we’re looking at heat exposure there’s the impact of heat that is non-exertional and exertional heat stroke,” said Dr. Kay Judge, a Sutter Health Internal Medicine Physician.

According to Dr. Judge, young and healthy people could be at risk of “exertional” heat stroke when they are outdoors in rising temperatures. This demographic can include workers who spend more time working outdoors, such as day laborers, landscapers, painters, and roofers.

However, older adults also have a risk of heat stroke, which is also increased due to their age. Generally, people in their 70’s or 80’s tend not to exert themselves in the same manner that roofers or day laborers do for extended periods of time.

Nonetheless, this population is still susceptible to heat stroke but of a different variety, “non-exertional” heat stroke, according to Dr. Judge. This demographic can include older people with chronic illness, people with infants, and people indoors without air conditioning.

4. There’s an increase in food poisoning during the hot season

Foodborne illness can peak in the summer months. The hot temperatures and humid conditions provide a breeding ground for bacteria that allows them to rapidly multiply.

“Food poisoning will happen in a few instances, and certainly more in summer than in the winter months because the growth of the bacteria is accelerated in warm temperatures,” said Dr. Judge.

Defrosted refrigerators, improperly thawed food, and even a barbeque can leave a risk of food poisoning in the hotter months. Cold items, like salads, that are exposed to extreme heat for a period of time at a barbeque or at potlucks can be at an increased risk for the season.

5. The risk of food poisoning isn’t worth the reward

Exercise caution when dealing with foods that have been left out in the sun all day. The real decision may actually be between losing a bit of money on wasted food and contracting a substantial illness.

“The things that we do risk… are bacteria that cause food poisoning. The most common one is Salmonella, but you have the big four: Salmonella, Shigella, Campylobacter, and E. Coli. and all of them cause pretty prominent GI symptoms and may require a visit to the doctor and treatment,” said Judge.

Dr. Rodgerson added, “The mild form [of food poisoning], you just get sick to your stomach. In the extreme forms, you can have everything from bloody diarrhea to really toxic because of the overgrowth of the bacteria on the food."

"Things like how you thaw your food is one part of it. Most coolers, if you have ice in them, aren’t going to hold up as well when you’re in really hot environments. Your ice is going to be gone a lot quicker because it's 110 or 115 degrees out there. You’re more vulnerable to having your food spoil, and, if you’re taking that risk, it’s probably not worth it.”

6. Refrigerate food for the maximum amount of time possible

“I think in terms of what we as physicians like to advise, we would say please make sure that foods that are supposed to refrigerate are refrigerated for the maximum time possible. Don’t leave things out at room temperature more than an hour. Especially if they contain meat or dairy,” said Dr. Judge.

“Make sure that the food you have is not expired and, even if it is still meeting the expiration date, make sure that food has not stayed out at room temperature and then put back in the refrigerator, because we are risking food poisoning when we do those things.”

“The reason you get more sunburns when it’s super-hot is because people are taking off their clothes when it’s hot,” said Dr. Rodgerson.

Sunburns become more prominent in the summer due to a number of factors, but a factor that may not always be considered is the clothes being worn. Typically, in the summer, people may wear fewer clothes or allow more skin to show in an attempt to cool down, however, this can leave skin unprotected from the sun and UV radiation.

“Recognizing that just being outside will lead to UV radiation, even if we’re covered under the shade, there’s some ambient UV radiation that’s going to come through the shade," said Dr. Rodgerson. "So, recognizing that between the times of 11 o’clock to 4 o’clock, from where the UV radiation has the tendency to be the highest, should be the time, especially when we’re hitting 100+ degree temperature, that we should avoid the sunlight and try to plan on our activities being either morning or evening activities.”

8. Feet can see an increased risk of athlete’s foot and sunburn during the hotter months

When the heat comes around, sometimes it is more comfortable for people to wear a pair sandals as opposed to a pair of shoes. In some instances, people may even go barefoot around their home. However, this trend can leave feet open to sunburns and athlete's foot.

“When we’re talking about the feet particularly, the more we sweat the more we breed fungus that will lead to athlete’s foot,” said Dr. Judge.

“When we talk about heat and protection from heat, we usually think sunscreen… but what we also should know is that clothes can also protect us from the heat and provide an extra layer of protection and some clothes do a better job than others,” said Dr. Judge.

The Occupational Safety and Health Administration suggests that people wear loose-fitting, light-colored clothes made of cotton to avoid heat-related illness, due to the material being more breathable but less absorbing of the sun’s heat. Materials that were dark-colored or made of synthetics like polyester, nylon, and rayon would be more likely to absorb and hold heat.

“Polyester may not allow us to sweat and may actually contribute to heat exhaustion and/or heat stroke,” Dr. Judge added.

Combining clothing that is protective from the sun and a good sunscreen can help people stay safe in the heat.

10. Protect yourself because the heat can be a real danger and melanoma is still risk

“When we talk about heat there are two things. One is the imminent danger of heat, which is heat exhaustion and heat stroke,” said Dr. Judge. “The second is the rising rates of melanoma, and that almost 100,000 people a year will get melanoma and one of the most common causes of cancer in young women is melanoma.”

Dr. Rodgerson added, “I think the most important thing is just be smart about the heat. Heat is a danger. The sun is a danger. The most likely injury people are going to get is going to be a sunburn, so protect yourself from a sunburn. It may not affect you even with a sunburn, maybe skin cancer down the road, so protect yourself from the sun with sunscreen.”