The murder shook the small town of Clifton, but what made it even more shocking was just a few months earlier, another person was murdered, 17-year-old Judy Whitley.

Whitley was found bound and nearly naked in a field just outside town. For the first time, her sister Patricia Whitley explained why she believes Judy’s murder – and Mickey Bryan’s – are connected.

"Judy was always like a little clown. She loved animals. She had a cat. She always made her smile,” Whitley said.

She said Judy was a special child, although they were almost 10 years apart, the girls were close.

"I would never leave the house unless I said ‘love you Judy’ and I would tease her and she'd say ‘stop it’," Whitley recalled.

She said that’s exactly how she remembers saying goodbye on the day Judy died.

"The last time I saw Judy alive, she was on the porch and she was standing there and I said ‘bye Judy. Love you. Kisses, kisses’ and it just drove her nuts!" Whitley said. "Then I went to work and it’s the last time I ever saw her."

Whitley said sometime on the afternoon of June 19, 1985, Judy walked to the store to get a coke. Then, she went missing.

"I go home and I can't believe what I'm hearing. Judy's gone? What are you talking about? We're looking everywhere, calling her friends everybody." Whitley said. "Next thing I know, Dennis Dunlap is telling my entire family and the police department gathered in that room that we found Judy and she is dead."

Judy’s nearly naked body was found bound in a field near town on June 20, 1985. According to the coroner, Judy had been sexually assaulted and died by asphyxiation.

"I can't even tell you the emotions going through that room. My mother ended up on tranquilizers, I was in the hospital getting shots because my blood pressure went up so high,” Whitley said. “My whole family was just torn apart that day, literally."

The officer Whitley remembered delivering the news, Dennis Dunlap, had joined the Clifton Police Department earlier that year. She said she went on a date with him once, but declined going out with him again. At first, Whitley said it didn't seem strange that Dunlap immersed himself in the case even though he wasn't the lead investigator.

"He was all over with my family trying to console us and trying to help find her etcetera, etcetera,” Whitley said.

It turns out Dunlap wasn’t who they thought he was.

"He was always there. It seemed like he would just show up out of nowhere all the time," Whitley said. "I felt like now that I look back on it, I just feel like he was watching." 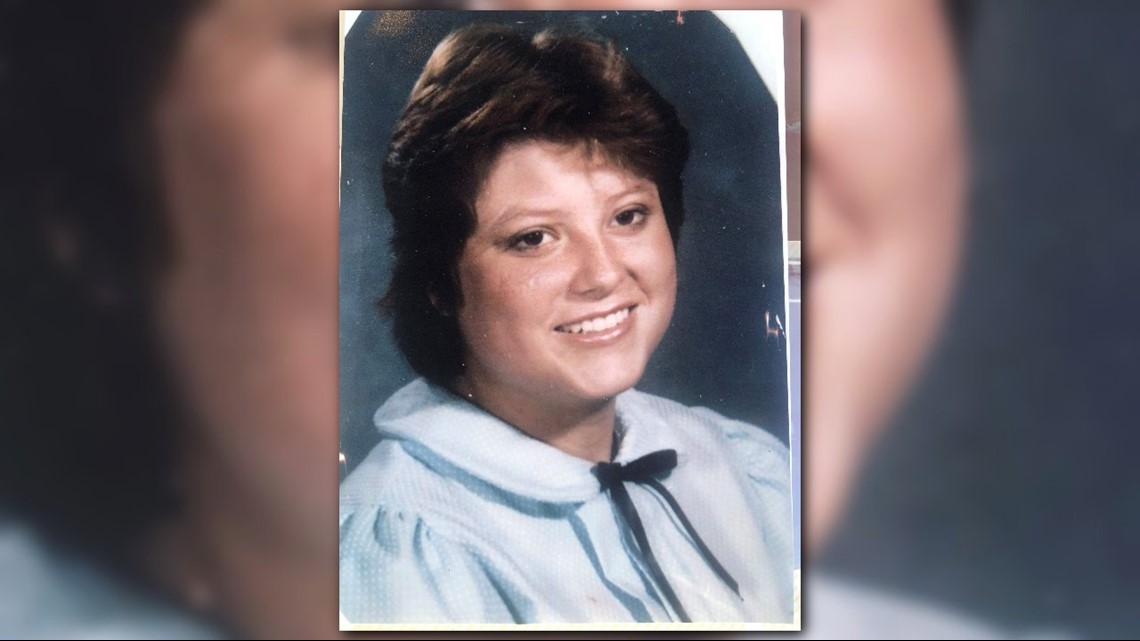 A few weeks after Judy’s death, Whitley ran into Dunlap at the bank in town. She said he told her he'd had to take a lie detector test in Judy’s murder and would soon be moving.

"I thought it was weird. I thought, Why are you moving now? Why are you leaving the police department?” Whitley said.

Before he left, a rumor spread about a diary Judy allegedly wrote everything in. Police wanted to find it to see if it held clues in Judy’s murder, but Whitley doesn't think it ever existed.

"Nope, nope! My sister did nothing as far as writing in a diary," Whitley said. "She would write Kevin plus Judy and little hearts, and she would read a lot, but she never wrote."

"You could hear that! It woke me up out of my bed! You could hear it and see it everywhere! It was a big bang! It was unbelievable," Whitley said.

When the smoke cleared, the case went cold. Dunlap left the Clifton Police Department just two days after the explosion and then apparently left town.

For more than 10 years, Whitley said her family heard nothing about her sister’s case. Then, on April 12, 1996 Dunlap committed suicide. A few years later, the Clifton Police Department officially announced he’d been the one who murdered Judy.

"I almost felt a little relief, but I was angry and we were angry that they couldn't say that when he was alive," Whitley said.

After his suicide, and before the police announcement, the Texas Rangers interviewed Dunlap’s ex-wife. In court documents, she admitted to talking with Dunlap about Judy’s death. She also claimed one of Dunlap’s friends told her after his suicide that he’d admitted to having sex with Judy and killing her. She also said Dunlap claimed he’d been dating Mickey Bryan and had been with her the night she died. 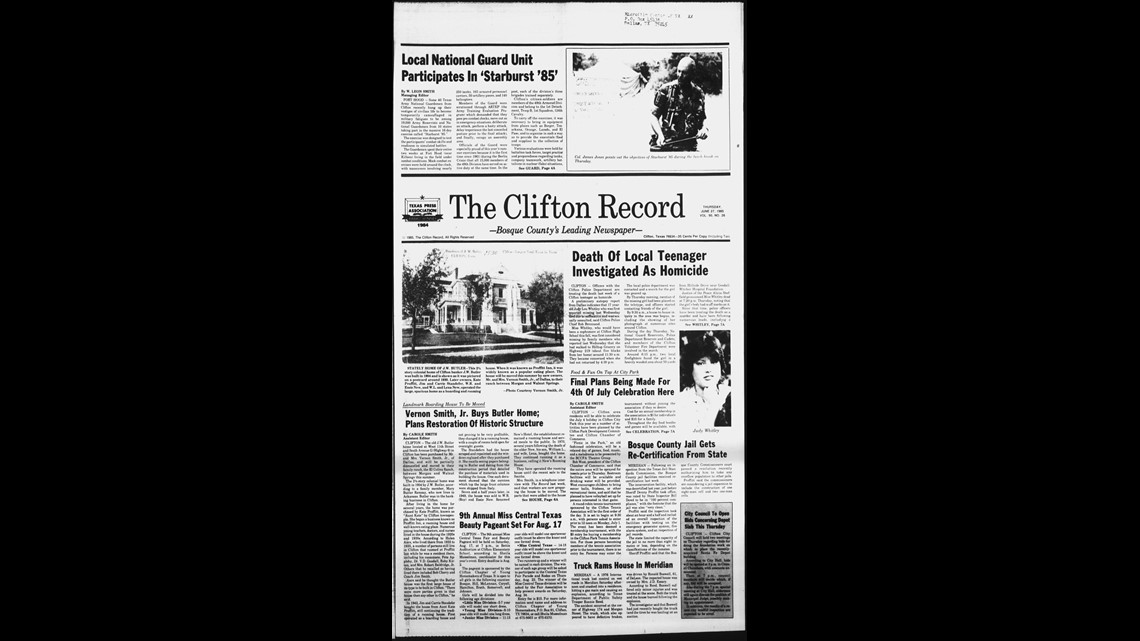 Whitley said she always suspected Dunlap had something to do with her sister’s murder. She also said she believes he killed Bryan, who was found murdered on October 15, 1985.

Joe Bryan, Mickey’s husband, was eventually convicted of her murder. He’s been in prison for more than 30 years and has always claimed he’s innocent.

Whitley's belief in Bryan’s innocence, and in Dunlap’s guilt, are why she decided to testify during his evidentiary hearing this summer. She and several other women claimed Dunlap had a history of stalking women. One woman even tried filing a police report against him, but said nothing was ever done.

Jan Zuehlke and her daughter, Lara, lived in Clifton when Judy Whitley and Mickey Bryan were murdered. Like many in the small town, the killings mesmerized them.

Zuehlke even kept every newspaper article about the murders and still has them to this day.

"It was shocking that this young girl was killed because nobody could figure out why?” Zuehlke said.

That question, and the fact that it was never answered, led Zuehlke and her daughter to write a book loosely based on the murders.

'No Motive in Murdoch' was published earlier this year, before Bryan’s case was featured in a New York Times and ProPublica investigation written by Pam Colloff.

Zuehlke said while the timing is purely coincidental, her hope remains the same.

“My prayer is that the truth will come out," Zuehlke said. "It needs to come out so that Clifton can put it to rest."

As for Whitley, her hope is for justice. She feels she can’t get it for her sister, since Dunlap is dead, so she’s going after it for Bryan.

"My sister's dead. They could never take care of the person who did that to her," Whitley said. "So, if I can't get any justice for my sister at least I can get something for Joe Bryan.”

Bryan’s attorneys will meet with Judge Doug Shaver and Bosque County Prosecutor Adam Sibley Nov. 9 to turn in their final findings from Bryan’s August evidentiary hearing. Judge Shaver can then make a recommendation to the Texas Court of Criminal Appeals about Bryan’s case.

Expect more from KCEN Channel 6 as we continue following this story, bringing you any updates as they become available.