'We shall not see his like again': Biden, Fitzgerald honor McCain at Phoenix service

PHOENIX - Sen. John McCain has left behind a lasting legacy of service to this country and to the state of Arizona. Thursday marked the second stop on his journey to his final resting place in Annapolis.

Political giants, local athletes, and thousands of the people who elected him to serve Arizona for over three decades were in attendance at North Phoenix Baptist Church to honor the senator.

Frank Sinatra's "My Way" played on the church's speakers as the memorial service came to an end, the perfect representation of how many, who have spoken in the past week, said John McCain lived his life.

As McCain's motorcade carried his American flag-draped casket to and from the church, people and first responders lined the route to pay their respects to the man who gave so much for his country and state.

People on a pedestrian overpass hold US and Arizona flags. McCain just passed by on his final trip to the airport. @12News pic.twitter.com/lWZeVlQ0bE— Michael Crowe (@MichaelReports) August 30, 2018

John McCain left Arizona for the last time Thursday, one step closer to his final resting place.McCain's remains will be moved to lie in state in the U.S. Capitol Rotunda on Friday, an honor that will include another ceremony honoring him and public viewing expected to last through the evening.Another memorial service awaits Sen. John McCain in Washington D.C., before he is finally laid to rest in a private ceremony Sunday, next to one of his best friendsThe two men who beat him in his presidential runs, presidents George W. Bush and Barack Obama, will speak at his memorial service Saturday.READ: Schedule of memorials and ceremonies honoring John McCain in Washington, D.C.

The 'Maverick' leaves his beloved state 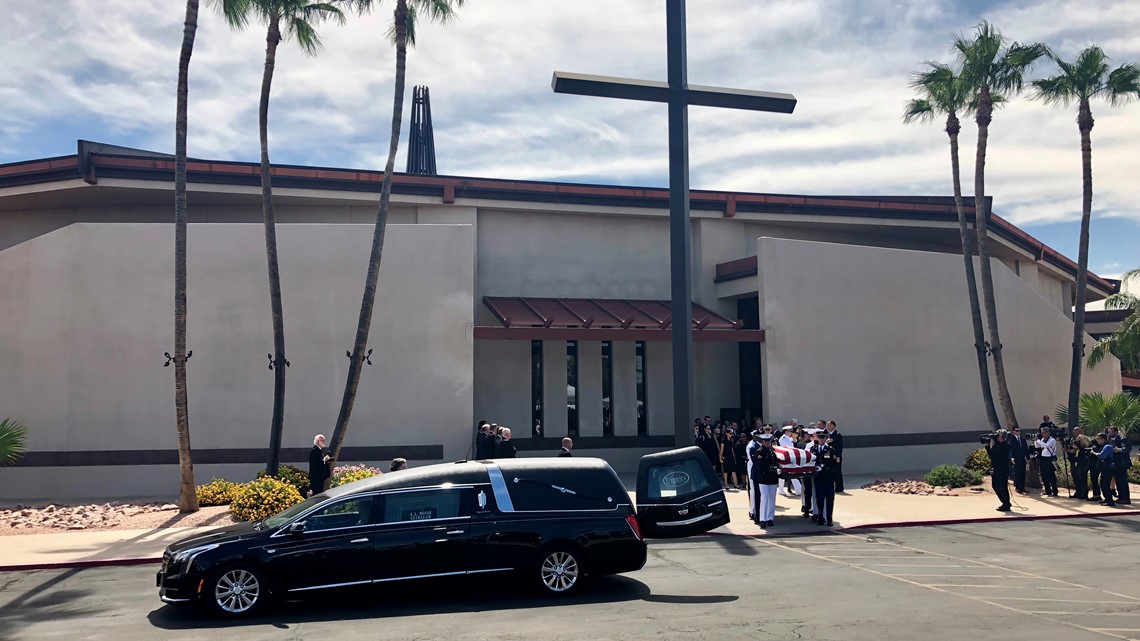 For the final time, Sen. John McCain leaves Arizona en route to the nation's capitol, on a plane fitted for the Vice President of the United States.

A crowd of supporters gather outside the church to say one last goodbye to Senator McCain.

A crowd of supporters have gathered outside the church to say one last goodbye to Senator McCain. Extremely somber tone out here #12News pic.twitter.com/czcfcgAnWh

The American flag-draped casket of John McCain is carried out of the church, followed by his family. Frank Sinatra's "My Way," can be heard as they exit and the service ends.

After a beautiful service, John McCain’s body will now be flown to Washington where he will lie in state tomorrow #12News pic.twitter.com/cqWQpw29Zs

McCain’s motorcade will depart the church for Phoenix Sky Harbor International Airport where the senator will leave Arizona for the final time.

"My name's Joe Biden. I'm a Democrat. And I love John McCain."

Biden spoke the longest and began his remarks much like the others before him had: with laughter from the crowd.

The former Vice President said he's always looked at McCain as a brother and he trusted McCain with his life.

"We had a helluva lot of family fights," he said.

"In order to survive we have to remember how they lived, not how they died," Biden said.

Biden said the whole world shares in the aching of the McCain family, pointing around the church at the thousands in attendance as evidence.

At times Biden raised his voice, speaking passionately about his friend John McCain.

"Whenever I was in trouble, John was the first guy there," Biden said. " And we never hesitated to give each other advice."

Speaking on why McCain's death has impacted the country so much, Biden said he thinks its because "they knew John believed so deeply and passionately about the soul of America."

Biden said what made John McCain special was his optimism. It made him "a giant" among us, he said.

"John McCain's impact on America is not over," Biden said.

Speaking to McCain's family, Biden said McCain owes much to what he was to his wife, Cindy McCain, and his kids are "proof of his success."

Biden ended his remarks by paraphrasing Shakespeare: "We shall not see his like again."

McCain's son, Andy McCain, followed Biden with another reading from the Bible. And the Brophy Student Ensemble performed "I love you, Arizona."

Larry Fitzgerald told the story of his visit to Vietnam, where McCain was held as a prisoner of war many years before.

The crowd laughed as Fitzgerald went through comparisons between him and McCain. He called it an "unlikely friendship."

"He was the epitome of toughness, and I do everything I can to avoid contact." Fitzgerald said.

Fitzgerald said McCain would text him to "pick it up" on Sunday. The crowd laughed again.

"Yes, ours was an unlikely friendship, but it was one I will always cherish," Fitzgerald said.

"He celebrated differences. He embraced humanity, championed what was true and just and saw people for who they were."

"We are all better for having known you," Fitzgerald said.

McCain's friend Tommy Espinoza said John McCain was a person who loved with his energy, who loved everyone, who loved his country.

RELATED: Tommy Espinoza: 'When he was running for president, I introduced him as my compadre’

Laughter again filled the church as Espinoza told stories of knowing McCain and his interactions with the senator over the years.

"To me John really did reflect our country in its true form," he said.

Espinoza said John reflected love and "the love of a strong man, and that is nowadays hard to come by."

"What he knew is that we all make America great," he said.

Espinoza said McCain's legacy will go on for generations because "people will talk about Sen. John McCain as one of the greatest heroes in our lifetime."

Espinoza's touching remarks were followed by a performance by Jonah Littlesunday.

McCain's daughter Bridget started the line of speakers with an emotional reading from the Bible.

The senators' lifelong friend and former Arizona Attorney General Grant Woods had the crowd laughing with a story of the first few hours he spent with McCain and McCain's "ridiculously bad driving."

Woods said knowing and working with McCain was "the greatest honor of his life."

“We’re going to miss so many things about him here," Woods said.

McCain, Woods said, was our hero in Arizona and "America's hero."

McCain's casket was placed near the stage.The memorial service for Sen. John McCain began. Larry Fitzgerald was seen sitting next to Vice President Joe Biden on the stage.

McCain's flag-draped casket was carried inside the North Phoenix Baptist Church. Arizona sports legends Luis Gonzalez and Shane Doan aweree among the pallbearers. The McCain family followed the casket inside the church.

The motorcade arrived at the North Phoenix Baptist Church.

The motorcade has arrived. John McCain’s family is filing into the church #12News pic.twitter.com/jiJjYIEC8D

Lights inside North Phoenix Baptist Church now dimmed as prelude on piano began. McCain motorcade on Central Avenue came closer to its arrival at the church. More and more people lined the route as McCain's casket moves closer to the service.

Ane Kopilas, 81, was born in Croatia. Thursday morning, she sat outside the North Phoenix Baptist Church awaiting the arrival of McCain's procession.

This is Ana KOpilas, 81, who was born Croatia. She’s outside the church taking in the scene as we wait for the motorcade to arrive. pic.twitter.com/ZbjjNBKAvF

The McCain motorcade exited the I-17 and driving on Camelback Road.

In Washington, white flowers sat on a mantel in McCain's Senate office.

A small memorial to Sen. McCain was set up earlier this morning outside the Senate Russell Office Building.

Small memorial to ⁦@SenJohnMcCain⁩ outside Senate Russell Office Building, where he had offices #12News pic.twitter.com/uXPij7yask

Sen. Jeff Flake and his family arrive at the North Phoenix Baptist Church.

Sen. Jeff Flake and his family have arrived here at McCain’s service pic.twitter.com/cMoBTUshzE

Dawn Wilson said because of McCain she’s able to go to the doctor. “They don’t make men like him anymore.”

Vietnam veteran Carlos Gutierrez started to weep when I asked him to share his thoughts about McCain as he stands near the church. “I never got to thank him. It’s all I can do.”

Speaking at the church with Team 12's Mark Curtis, Gov. Doug Ducey said McCain "will forever be identified with our state like the Grand Canyon."

The procession left the Arizona State Capitol on its way to the North Phoenix Baptist Church.

- Northbound on 17th Avenue to westbound on Adams Street

- Westbound on Adams Street to northbound on I-17

- Northbound on I-17 to eastbound on Camelback Road

- Eastbound on Camelback Road to northbound on Central Avenue

- Northbound on Central Avenue to the second church driveway

The motorcade and McCain family arrived at the Arizona State Capitol. McCain's flag-draped casket was carried out of the Capitol and placed in a hearse.

McCain's body was expected to leave the Arizona State Capitol around 9:15 a.m. where he has lain in state overnight.

The procession carrying John McCain's body took about 30 minutes from the Capitol to the North Phoenix Baptist Church, according to DPS. The public was welcome to line up along the route to pay their respects as the motorcade drives along I-17 North, Camelback Road and Central Avenue.

- Northbound on 17th Avenue to westbound on Adams Street

- Westbound on Adams Street to northbound on I-17

- Northbound on I-17 to eastbound on Camelback Road

- Eastbound on Camelback Road to northbound on Central Avenue

- Northbound on Central Avenue to the second church driveway

About 2,000 flags lined the street leading up to the North Phoenix Baptist Church for today’s service.

Honor Guard group gathered around a portrait of McCain at the church. The group said they've been working since Saturday night when McCain's body was brought to Phoenix.

This Honor Guard group was also at the State Capitol yesterday. They say they’ve been working round the clock since Saturday night when McCain’s body was brought to PHX, where they stood guard. pic.twitter.com/Qh2kl1QdwF

Members of the public who received tickets for McCain’s service as well as plenty of invited guests were seen gathered outside the North Phoenix Baptist Church.

Some of the 1000 members of the public who received tickets for McCain’s service are here outside the church, as are plenty of invited guests. pic.twitter.com/ifnzQNiNYP

As many as 15,000 people gathered and braved the heat Wednesday at the Arizona State Captiol to pay their respects and say goodbye to the man known as the "Maverick."

Sen. Flake, with his head bowed in prayer, said "we are especially grateful that John made Arizona his home."

READ: 'We are grateful for his life': Thousands gather to honor Sen. McCain at Arizona Capitol 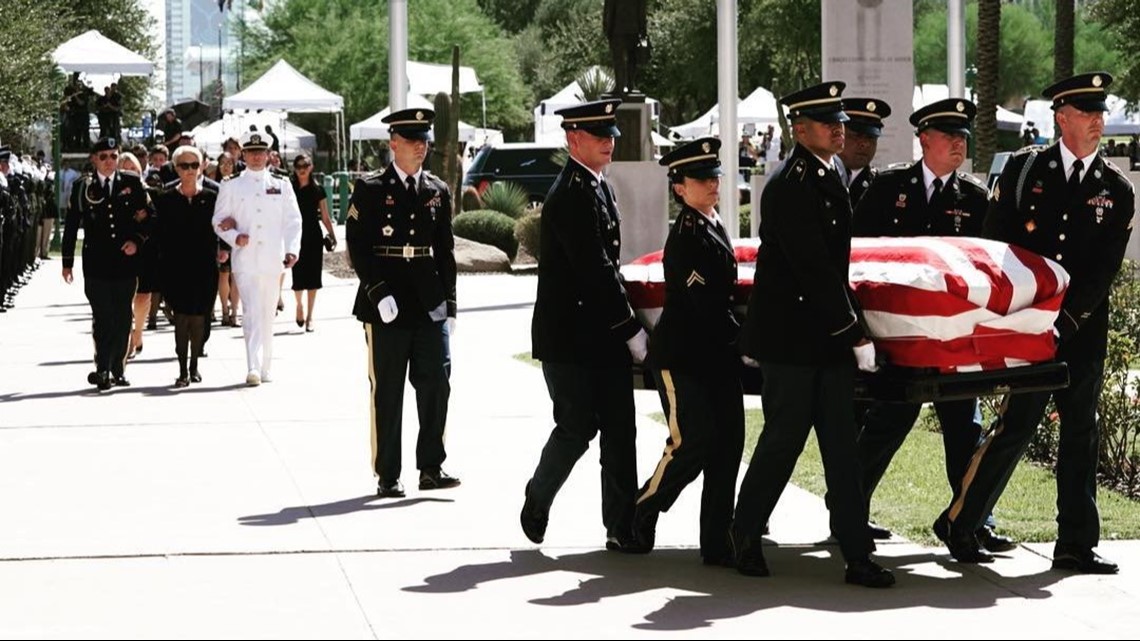 Several of McCain's children greeted those waiting in line to pay their respects late into the night.