As Seen On Tv

The Bangor Symphony Orchestra is recording five concerts in the spring of 2021 for its 125th anniversary season that audiences can stream safely from home. 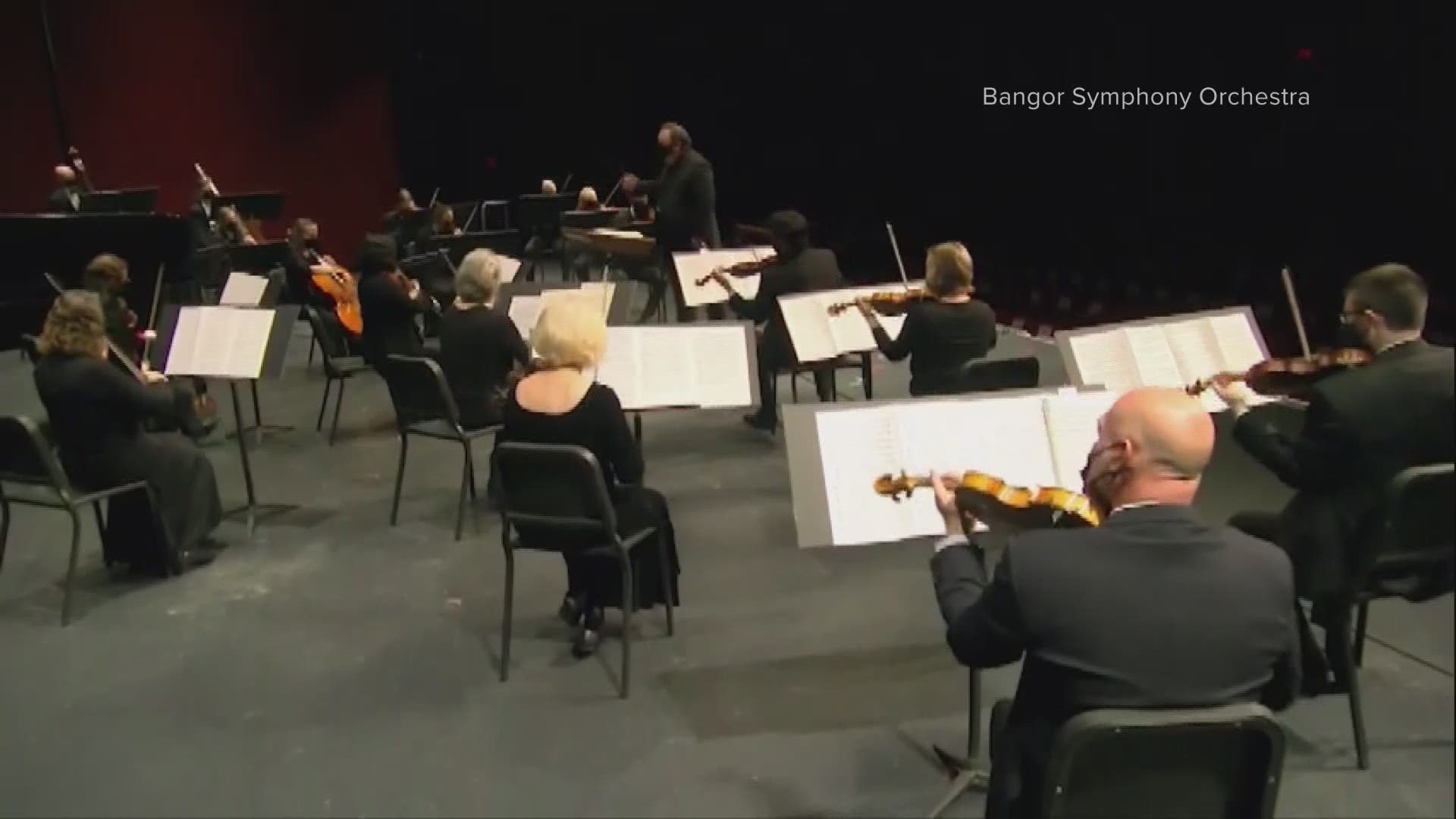 BANGOR, Maine — For many of us, the pandemic has brought on a sense of loss. That sentiment hits especially hard for musicians -- many of whom are out of work and unsure when playing or singing together for audiences will be possible again. Creative minds resort to creative measures, though, as the Bangor Symphony Orchestra is about to prove.

On Friday, February 12th the BSO began streaming its 125th anniversary season digitally. This landmark season is made up of five different concerts that will be released online each month through June. In late January, the musicians met up to rehearse and record music with a professional camera crew -- socially distanced, while wearing masks. The process has taken some adjustment, but those involved say it has been worth it to come together again.

"It was so cathartic to see everybody when you haven't seen your colleagues in so long," Marison Solomon, a longtime cellist with the BSO, expressed.

I absolutely loved getting to see a little bit of what the @BangorSymphony is offering this season for audience members to stream at home! Music performances are definitely something I've been missing during #COVID19. #NEWSCENTERMaine pic.twitter.com/m5y4eLMXZL

Solomon first discovered her passion for the cello as a young girl while attending a BSO concert. She began playing in elementary school and joined the orchestra while she was in high school for her first job. After attending college, she eventually moved back to Maine in 2004 and has been playing with the BSO ever since. To say it's a major part of her life would be an understatement -- and that's why when the pandemic hit, the consequences were devastating.

"When I say 'existential crisis', it's not a hyperbole," Solomon expressed, noting, "I went -- I shouldn't even admit this out loud -- probably a month, maybe, without even touching my cello."

Solomon says she was excited to take part in the BSO's first concert this season ("Digital Masterworks I: Bach to Bloch"), recorded in front of cameras instead of a live audience. Solomon admitted it's not quite the same as playing with a room full of people, soaking in the emotions of the music -- but she's confident the BSO will work back to that one day when it's safe.

"Being in the theater, being at a concert -- you laugh; you cry; you learn something," Solomon said.

Brian Hinrichs, executive director of the BSO, says it was important to him and his team to stay connected to their community and "do right" by this historic anniversary.

"It's a way of taking away some of the feeling of isolation that our audience is feeling now," Hinrichs explained.

It's an opportunity for the musicians to reunite with each other, too. This is BSO's music director and conductor Lucas Richman's 11th season conducting. He says what people need the most after basic needs is the arts -- and the pandemic has highlighted that importance. These virtual concerts are a way for musicians to practice their craft again and get paid. The last time the full orchestra played together was in November of 2019.

"It was so meaningful to be able to come back together and hear music together in one space," Richman admitted.

If anything, it's a reminder that humankind needs music -- and there is a light at the end of the tunnel.

"If we're not bringing music to our audience, then what are we doing?" Richman asked, noting, "We're not doing anything."

RELATED: The show can't go on for some local Maine theaters amidst COVID-19

People are invited to subscribe to the BSO's entire season online or buy tickets to individual concerts. You can find options and prices by clicking here.