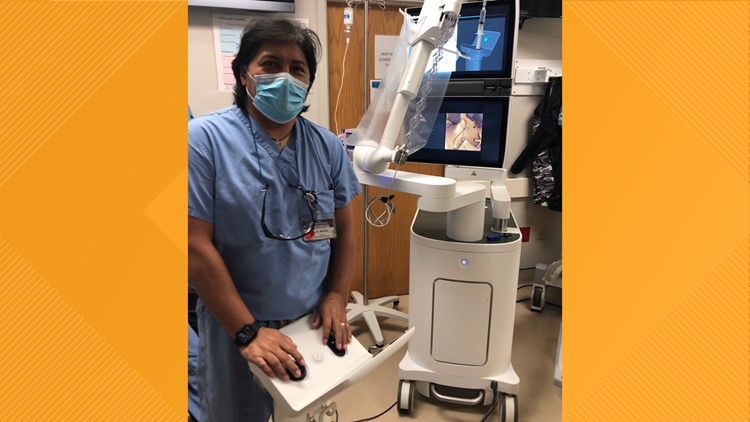 WACO, Texas — Ascension Providence in Waco is the first hospital in Central Texas with a new robotic tool that helps doctors diagnose and treat lung cancer earlier than previously possible.

The health system is the first in Central Texas to have the technology and one of only 25 health systems across the country with the Ion robot.

The technology is minimally-invasive and can help improve accuracy and precision of a biopsy test of a potentially cancerous nodule. Previously, when a patient met the clinical criteria and required a biopsy of a nodule on the lungs, doctors were not able to reliably biopsy the nodule through a bronchoscopy if it was less than two centimeters, meaning the patient would need to either return at a later date to see if the nodule had grown or undergo lung resection without an established diagnosis.

With the robot-assisted test, doctors can biopsy nodules as small as one centimeter, potentially diagnosing lung cancer earlier. They can also investigate nodules in more hard-to-reach areas that may have previously required CT scan-guided biopsies, which can have significant complications.

“The latest statistics show that more people in the United States die of lung cancer than any other type of cancer. This is partially because lung cancer is often diagnosed at a later stage than other cancers,” Dr. Boris Murillo, a pulmonologist at Ascension Providence, said. “This technology gives us the opportunity to more reliably biopsy and diagnose lung cancer in a suspicious nodule detected by low-dose CT scan performed for lung cancer screening,”

The Ion is the newest tool clinicians at Ascension Providence can use to diagnose and treat patients with lung cancer. Using this new technology, doctors can create a road map to access the lung nodule before they even begin the procedure. Then, a doctor controlling the robot can access the nodule by guiding a catheter to it using the road map and a camera. The robotic device remains steady and adjusts with the patient’s breath, which can reduce potential complications.

“We’re excited to be able to provide this potentially life-saving technology to our community," Dr. Maydee Rosario-Reglero, a pulmonologist at Ascension Providence, said.