Work crews continue to monitor the area after 13 train cars derailed when a semi hit the train Tuesday morning. 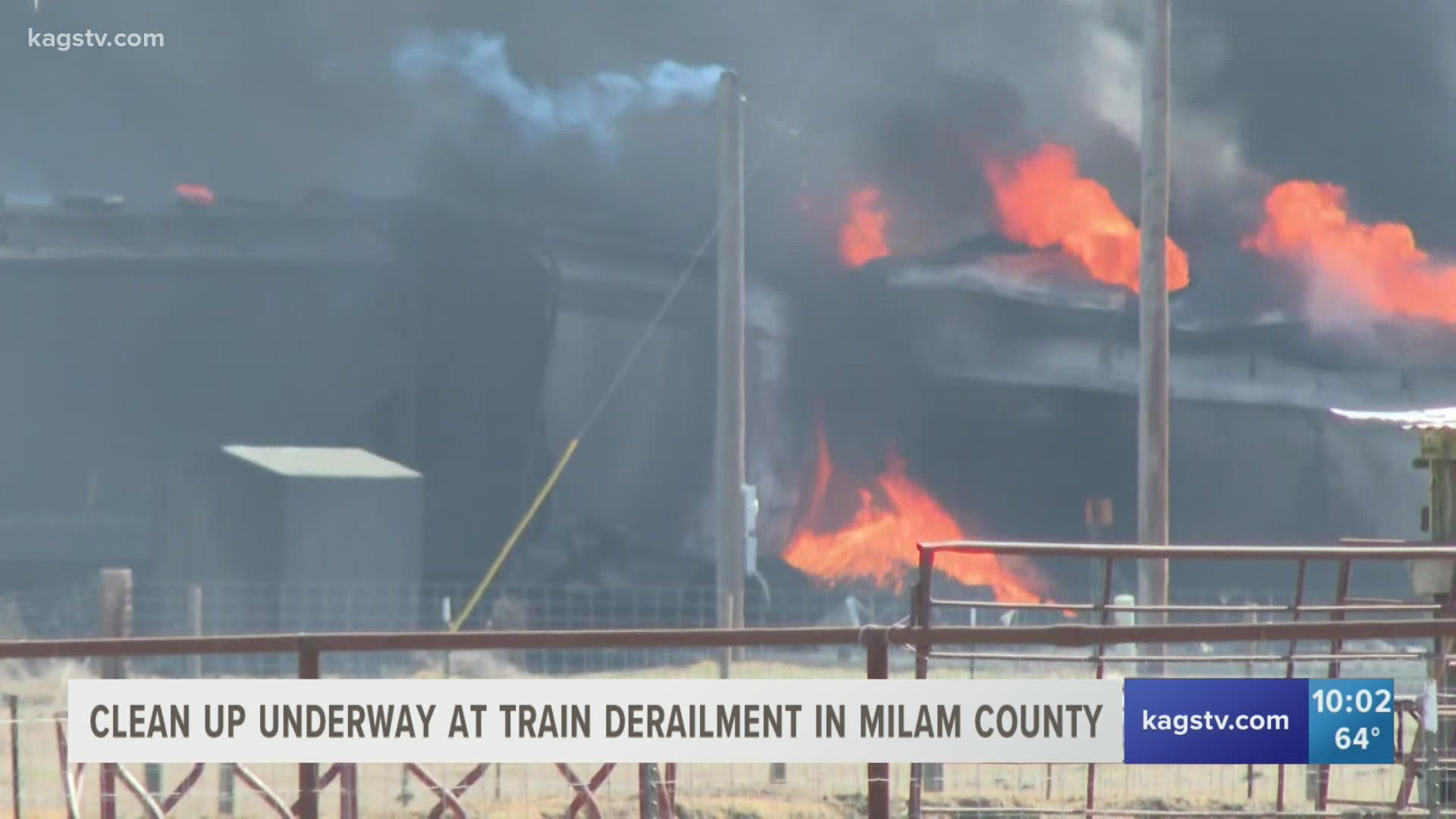 MILAM COUNTY, Texas — People in Milam County were jolted out of bed Tuesday around 6:45 a.m. after a flatbed semi and a BNSF train crashed at a railroad crossing near Cameron. Officials with BNSF said firefighters and DPS are working together to put out the fire, clean the mess and investigate what happened.

At least 13 cars derailed and five of those cars contained gasoline. There were cars that were carrying phosphoric acid, but Milam County Sheriff Chris White said those cars were behind the derailment. BNSF officials worked to disconnect and secure those cars first.

Investigators said the crossing arms were working at the time of the crash because there was another car stopped at the crossing. The semi avoided crashing into that car and the driver was not hurt.

"Fortunately, everyone involved, the truck driver, the individual in the car, the witness and the train crew were all able to escape without injury prior to the explosion," said Sgt. Bryan Washko, who is with the Texas DPS station out of Belton.

Shortly after the crash, officials said there were concerns on how the derailment would affect nearby sources of water.

"The first thing we're working with local authorities to do now is to make sure close by waterways are not affected," said Jeanelle Davis, who is the executive director with BNSF's Public Affairs office. "At this time, we do not see a threat to waterways, but we are doing that as an added abundance of caution."

At the scene where a train carrying gasoline & an 18 wheeler truck crashed in Milam County.

I’ll be live at 6 on @KAGSnews to bring you the latest update. pic.twitter.com/KFioEFOuGz

People who live near the crash scene said it was a disturbing way to be woken from their beds.

"Basically, it was just a big, loud boom," said Patrick, who lives near the crash scene. "Just got really loud and woke everyone up. Pretty much after that, you gotta dip. Just like that, it's a no go."

The evacuation was lifted after officials determined the immediate threat and fire had been contained.

The cost of damage has not been released and clean-up is expected to take several days.

BSNF has since established a claims hotline for anyone impacted by this derailment. The hotline number is 1-866-243-4784.