Four-time defending Big 12 champion Sooners have to beat the Bears to remain in conference contention. 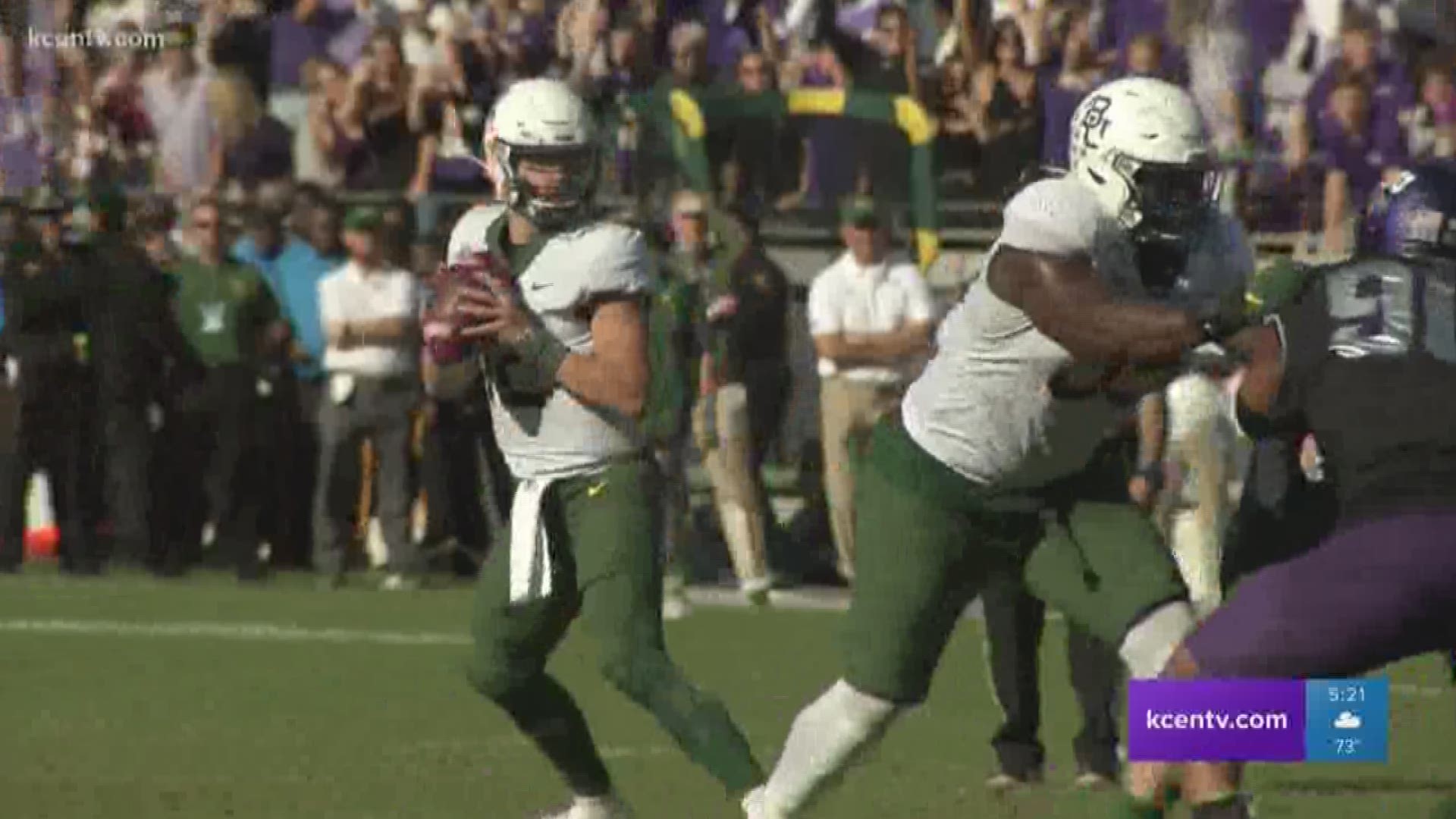 WACO, Texas — The eyes of the college football world were upon Waco, Saturday night. The Baylor Bears face the Oklahoma Sooners in what could be the biggest game at McLane Stadium since its inaugural season, five years ago.

No. 10 Oklahoma visits No. 12 Baylor in a potential Big 12 championship game preview.

The four-time defending Big 12 champion Sooners are 8-1 and have to win out for another playoff chance. They are 10th in the College Football Playoff rankings, three spots ahead of undefeated Baylor.

The Bears have won 11 games in a row with one of the Big 12’s top defenses. Oklahoma averages nearly 600 total yards and 50 points a game.

Baylor fans began making their way inside McLane Stadium more than an hour before game time.

The game ball was delivered by parachute jumpers about 20 minutes ahead of kickoff.

10:18 p.m. -- Have to give OU a ton of credit. They got off the mat and out the clamps down on defense while the offense got rolling. Baylor will regroup and be fine.

Baylor turns the ball over and that’s going to do it. Bears blow a 25 point lead in an epic meltdown as they get outscored 24-0 in the 2nd half to fall 34-31. Baylor is now 9-1 with Texas coming to McLane Stadium next week. This one is going to sting for a while.

Baylor has only had the ball for over 17 minutes so the offense should be well-rested. Let’s go make history.

Sooners have outscored Baylor 24-0 in the 2nd half.

9:57 p.m. -- This Baylor defense looks like a totally different group than we saw in the first half, again offense and defense not clicking at the same time.

9:55 p.m. -- Baylor offense does nothing yet again. Bears hand the football back over to Oklahoma. The defense needs a massive stop here with 4:15 left to play.

9:32 p.m. -- File that under stuff you don’t see every day: Brkic fakes the onside and sends it deep

9:29 p.m. -- Baylor has not scored a point since 3 seconds before halftime. They have to answer on this drive.

9:26 p.m. -- Ruling on the field is Hurts picked up the first down. It’s close and now it’s under review. Both wing officials said he had it.

9:25 p.m. -- Hurts just gets the 1st down. OU now in the red zone, threatening to make this a one score game. Officials will review the previous play.

What a turn of events for Baylor! OU was inches away from making this a 7 point game. Now the Bears are trying to make this a 3-score game.

9:05 p.m. -- Hurts fumbles at the goal line and James Lynch recovers. Baylor ball at the 35 after a penalty on Oklahoma

Baylor defense stepping up BIG time inside the 5. It's now 3rd & Goal for the Sooners at the 3-yard line

Grayland Arnold intercepts Jalen Hurts and returns it inside the OU 10. Brewer scores on the next play. BU has scored 28 unanswered.

Terrel Bernard, after recovering the Hurts fumble is headed back the tunnel to the locker room with a trainer

7:20 p.m. -- Charlie Brewer goes 30 yards to his favorite target, Denzel Mims for the score, capitalizing on an OU punt. This Bears team is on a level we haven’t seen this season.

7:07 p.m. -- RJ Sneed makes a sweet catch over the middle and a flag gets thrown on OU’s White for Targeting. Replay overturns. First down Baylor at the Sooners 36.

#Baylor picks up a first down but is forced to punt on its opening drive.

The Sooners won the toss but deferred to Baylor. Baylor received and defended the north endzone.

RELATED: Fans gearing up for College GameDay in Waco

RELATED: National Championship Trophy to be displayed in Waco Friday 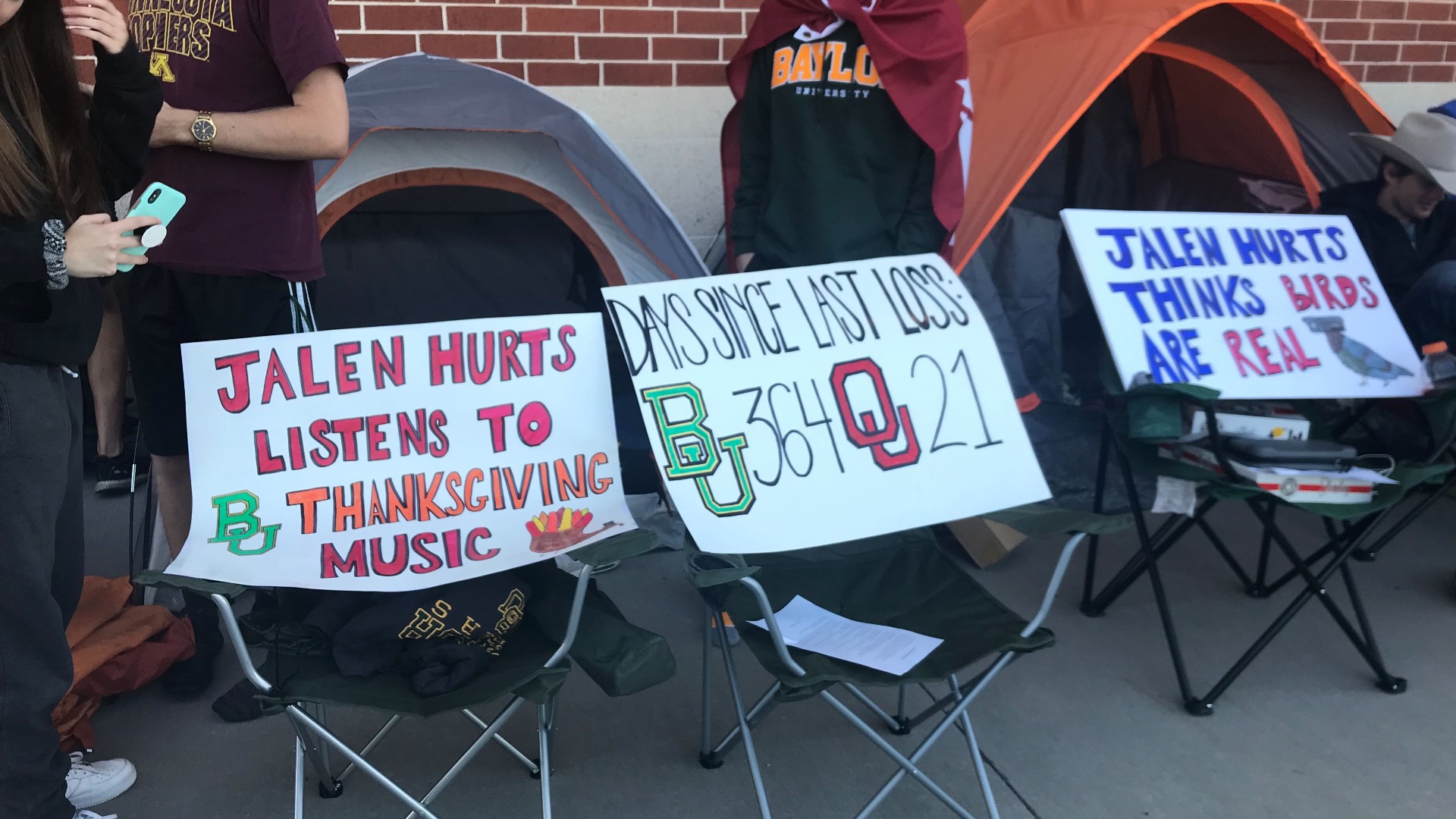