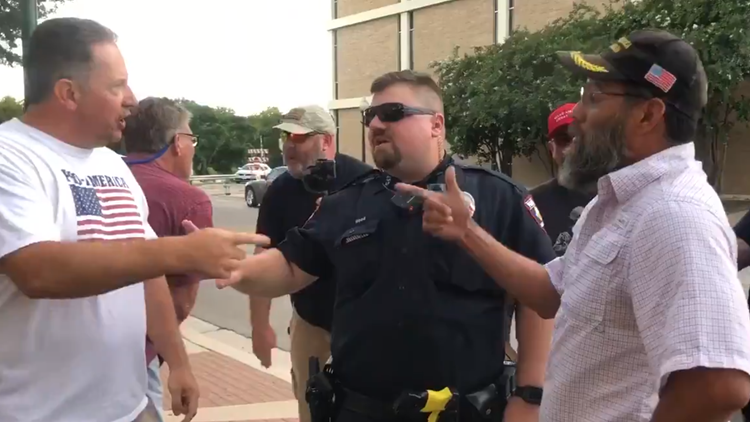 BELTON, Texas — The Bell County Democrats were met with counter-protesters Friday evening during their "Lights for Liberty" event in Belton.

Dozens of people aligned with the Bell County Democrats lined the streets in front of the Historic Courthouse to protest immigrant detention centers.

The event started peacefully enough with protesters on one side of the street and counter-protesters on the other.

But tensions rose as the event went on.

Those there in support of the event said they were looking to end the inhumane conditions refugees face at detention centers.

"This is not who we are we do not abuse children. We do not separate families, we do not put babies in cages and then put them on trial" said Bell County Democratic Chairman Chris Rosenberg.

The counter-protesters said they felt differently.

The two sides eventually met face-to-face in a screaming match that later escalated to pushing and shoving at times.

Officers responded to the scene and patrolled the area, after some time things settled down and both sides went to their own sides of the street.

The protesters say the goal is still to reach common ground.

"The law matters and we need to enforce the law. If they have a problem with the law and how legal immigration works, that's where their fight should be and not demanding that we disregard the law," Grisham said.

"Until President Trump and his enablers decide to tell the American people the truth about what is happening regarding immigration then we're going to continue to have a divide and it's going to get worse. What we're seeing here today in Belton is heartbreaking we should be talking to one another about the issues instead of screaming at one another," Rosenberg said.

Around 40 people demonstrated in support of the "Lights for Liberty" event while a smaller group of people counter protested.

No arrests were made during the protests.