Biker describes life after Twin Peaks shooting arrest, claims he wasn't even there

"It's like you're branded. You got Twin Peaks written all over your forehead, and no one wants anything to do with you." 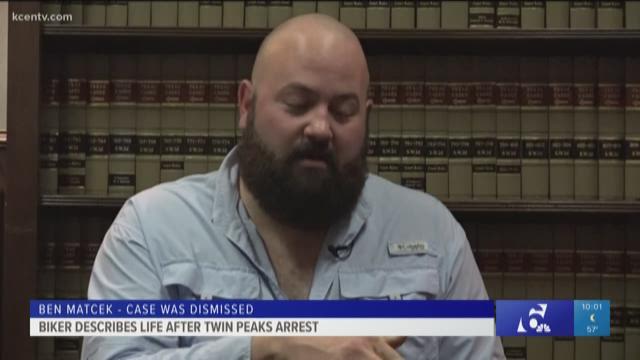 BRYAN, Texas - It's been almost a week since District Attorney Abel Reyna dismissed more than a dozen Twin Peaks cases. Now, bikers who were arrested and are now cleared are speaking out about what their lives have been like since the deadly shooting.

"It’s like you're branded. You got Twin Peaks written all over your forehead, and no one wants anything to do with you," Bryan resident Benjamin Matcek said, who was arrested at Twin Peaks but was recently cleared.

Matcek claims he was not at Twin Peaks at the time of the shooting.

"I'm not that familiar with Waco, but there was a bypass that goes by the shopping center where Twin Peaks was, and that’s where we saw the lights and I started to panic," Matcek said.

Matcek was on his way to the restaurant when he says a friend called him from there, saying one of their friends was shot. He said he only stopped by the restaurant to take his friend to the hospital but was arrested in an empty parking lot in Waco.

"I thought they would figure out who we were and let us go and we would be on our way," Matcek said.

But that didn't happen. Matcek was put in jail and slapped with a million-dollar bond. Last week district attorney Abel Reyna dismissed thirteen Twin Peaks cases and refused twenty-four. Matcek was one of them.

"I sat there and stared at a wall for 30 minutes and just started crying of course. It’s still not real when I wake up and have to remind myself they were dropped,” Matcek said.

He said in the last three years he lost his wife, and struggled to find a job. He went through a custody battle for his 4-year-old son.

"I don’t know how many times it was brought up and paperwork was sent over regarding my charges and the Twin Peaks incident,” Matcek said.

Mateck said he feels for those who died, but wishes there was some type of apology for bikers who had nothing to do with their deaths.

"I will be dealing with this for the rest of my life. Google doesn’t go away," Matcek said.

Channel 6 spoke to Matcek's attorney Dan Jones in Bryan. He said he's filed a civil lawsuit against McLennan County arguing his client was charged without probable cause. That lawsuit is still pending.