The blast knocked some homes off their foundations and jolted people awake as far away as Nassau Bay and La Porte. 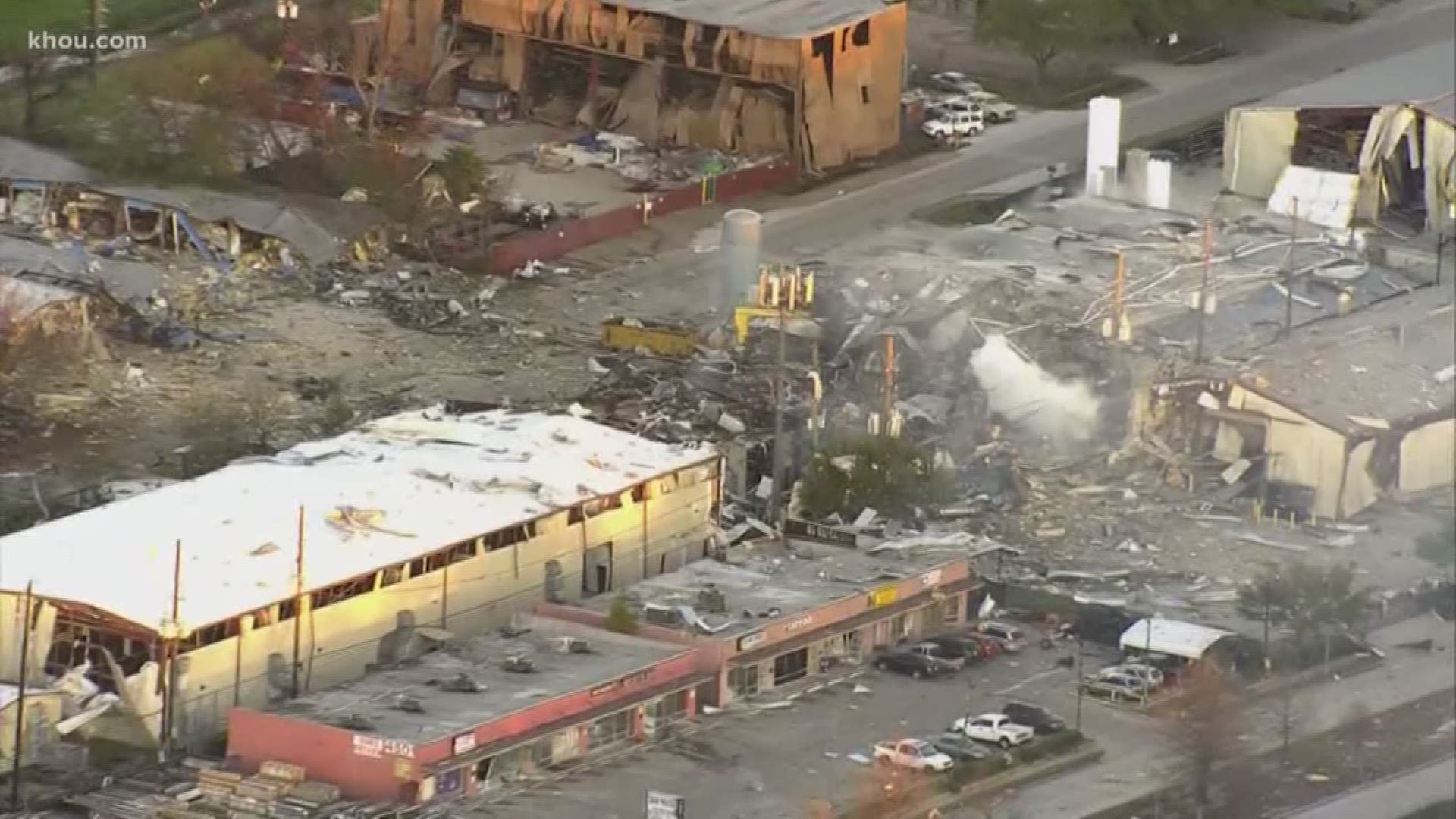 HOUSTON — Two people were killed early Friday in a massive explosion at an industrial site in northwest Houston.

Authorities identified the victims as Frank Flores and Gerardo Castorena. The two were apparently employees of the business and had shown up early to use the gym on the site.

A nearby resident was also taken to the hospital with unknown injuries and 18 people self-reported to emergency rooms with minor injuries, such as cuts and breathing issues, associated with the blast.

The explosion at Watson Grinding and Manufacturing at 4500 Gessner was heard and felt across the city at about 4:24 a.m. Friday.

It caused "significant damage" to nearby homes and businesses and left a debris field that stretched at least two miles away. At this time there's no evidence of terrorism, Houston's police chief Art Acevedo said.

At an afternoon news conference, Acevedo said it was extremely likely the two victims of the explosion were two male employees of the company. The families of both men went to the scene, and vehicles belonging to both men were still there.

RELATED: ‘I thought a plane crashed on top of my house’ | Couple stunned by extent of damage after massive explosion in NW Houston

Two neighborhoods near the explosion were closed off to people who don't live there. Acevedo says no one other than residents would be allowed in the Carverdale and Westbranch subdivisions. Police will be patrolling there around the clock.

Views from Air 11 of the blast site showed at least one industrial building completely flattened. Surrounding buildings had their walls, windows and a portion of their roofs blasted away.

“Watson Grinding and Manufacturing experienced an incident in the early hours of January 24, 2020 that resulted in the fatalities of two of our employees and impacted our operations.

"We are saddened by the tragic passing of our coworkers, and our deepest sympathies are with their families for their profound loss.

"We are working diligently to address the situation and cooperating with the federal, state and local authorities investigating the accident. We are extremely grateful for the brave efforts of first responders who were on the scene immediately, and we will continue to give our full cooperation and support to their efforts.

"Our hearts go out to the families and businesses impacted by this incident and to our community.  At this time our immediate concern is the safety and wellbeing of everyone in the area and our employees.

Further updates will be provided as more information becomes available.”

Multiple security cameras captured the explosion on video as well as the sound of the blast. One video showed a big plume of flames and smoke coming from the facility.

HazMat crews have shut valves containing chemicals, according to the Houston Fire Department. What remained of the fire was secured and allowed to burn off. Chief Pena said he didn't want to add water that could create harmful runoff.

RELATED: What is Watson Grinding & Manufacturing, the site of the major explosion?

Acevedo asked the public to be on the lookout for debris, damage and even body parts on their property. The chief said residents should not touch any questionable materials found and instead call 911.

Police also said those with loved ones in the area should check in on the residents. They said if you have concerns about a friend or family member you can call police to check on them if you can't reach them by phone.

Homes near the destroyed facility had broken windows and collapsed ceilings and walls.

Officials said ingredients used to make polypropylene were released in the explosion.

1 / 35
Capt. Daniel Arizpe, PIO/ Cy-Fair FD
Cy-Fair FD Search and Rescue 1 assist HFD investigators with a search for possible missing people and human remains after an explosion in the 4500 block of Gessner Rd. Friday in Houston.

Houston Mayor Sylvester Turner got his first look at the damage caused by the major explosion on Friday evening that leveled the facility.

He toured some of the more than 200 homes damaged by the blast, many of them left unlivable.

Even though nearly 20 others were hurt, Mayor Turner said it could have been so much worse.

“If the explosion occurred two hours later many more people, lives, could have been lost and many other individuals in the surrounding areas could have been seriously impacted,” Mayor Turner said.

Now authorities are trying to pinpoint what caused the explosion.

Mark Wilson, ATF assistant special agent in charge, said they’re bringing in their National Response Team to figure that out.

Fire Chief Sam Pena said they have a good idea where the explosion started but they aren’t willing to say just yet because they want to leave all their options open.

Mayor Turner said the facility had been here since 1972 and many of the communities were built around it.

“It would be irresponsible on our part not to evaluate and assess what has taken place here today and to do everything that we can to mitigate the risk of future explosions of this kind to the extent we can,” Mayor Turner said.

The city said all things have to be considered moving forward in a changing city to protect residents.

The investigation of the debris field is expected to take several days.

Meanwhile, State leaders are reaching out to FEMA Looking at the possibility of getting federal help.

RELATED: Warning to explosion looters: 'You will be charged to the fullest extent of the law'

Firefighters have gone to nearly 200 homes, telling people there's not a mandatory evacuation but suggesting that people consider leaving the area near the explosion site.

With many homes unsecured by damaged doors and windows, the police chief said there would be extra roving patrols in the neighborhood.

"Do not get caught looting because it will not be a slap on the wrist," said Acevedo.

What caused the explosion?

Chief Acevedo said multiple agencies, including the Bureau of Alcohol, Tobacco, Firearms and Explosives, are investigating the cause of the explosion. At the 9 a.m. press conference he said there was no evidence of terrorism.

Injuries reported from the explosion

Shortly after the explosion, officials said one person was transported to the hospital. Later Friday morning, the Houston Fire Department tweeted that 18 people self-reported to emergency rooms with minor injuries, such as cuts and breathing issues, associated with the explosion. Two people, presumably employees of the company, were killed, Acevedo said.

If my home was damaged in the explosion, who can I contact?

READ MORE: What to do if you are impacted by the explosion?

What about residents in the affected areas?

Two neighborhoods near the explosion were closed off to people who don't live there. Acevedo says no one other than residents would be allowed in the Carverdale and Westbranch subdivisions. Police will be patrolling there around the clock.

RELATED: Warning to explosion looters: 'You will be charged to the fullest extent of the law'

Because many of the homes that were damaged aren't inhabitable, officials will shift people from a shelter into temporary housing.

How you can help explosion victims

If you have any donations that you'd like to drop off for families affected by the explosion, please do so at the Duncan YMCA on Clay Road.

Is there anything dangerous in the air after the explosion?

All readings from HFD indicate there is nothing dangerous in the air.

At a news conference this morning, police said polypropylene was released from the explosion. City officials later clarified the release included propylene and liquid nitrogen, which are used to make polypropylene.

Is there an impact on Houston schools?

Bane Elementary and Dean Middle School were closed today to students and staff; all other facilities were open

Spring Branch ISD reports that all of their buildings were in good shape, but there could be delays in transportation.  They are also keeping students and staff inside as a precaution. All after school activities and athletic events will proceed as scheduled.

YES Prep Northwest campus, which is in the area, is open today. They may experience bus delays, but classes will resume as normal. Students will be kept indoors.

Houston ISD said they do not have any schools in the immediate area that are being affected and will be operating under normal procedures today.

Gessner will be closed for the rest of Friday.

No evacuation at this time, but avoid the area

Though there are no evacuations ordered, people are being told to avoid the area around 4500 block of Gessner. Reporter Adam Bennett reports that firefighters are going door-to-door in the area, telling people there's not a mandatory evacuation, but suggest people consider getting out of the area because they're not completely sure what's in the air.

One viewer shared video from their doorbell camera that show the blast.

Another viewer sent in surveillance video where you can hear the loud blast.

Officers on scene said there could be a secondary explosion and the air quality may pose a threat, and instructed our KHOU 11 crew away from the scene.

Right now there is no confirmation as to what caused the explosion.

KHOU 11's tower camera shows what appeared to be smoke off 290 in northwest Houston.