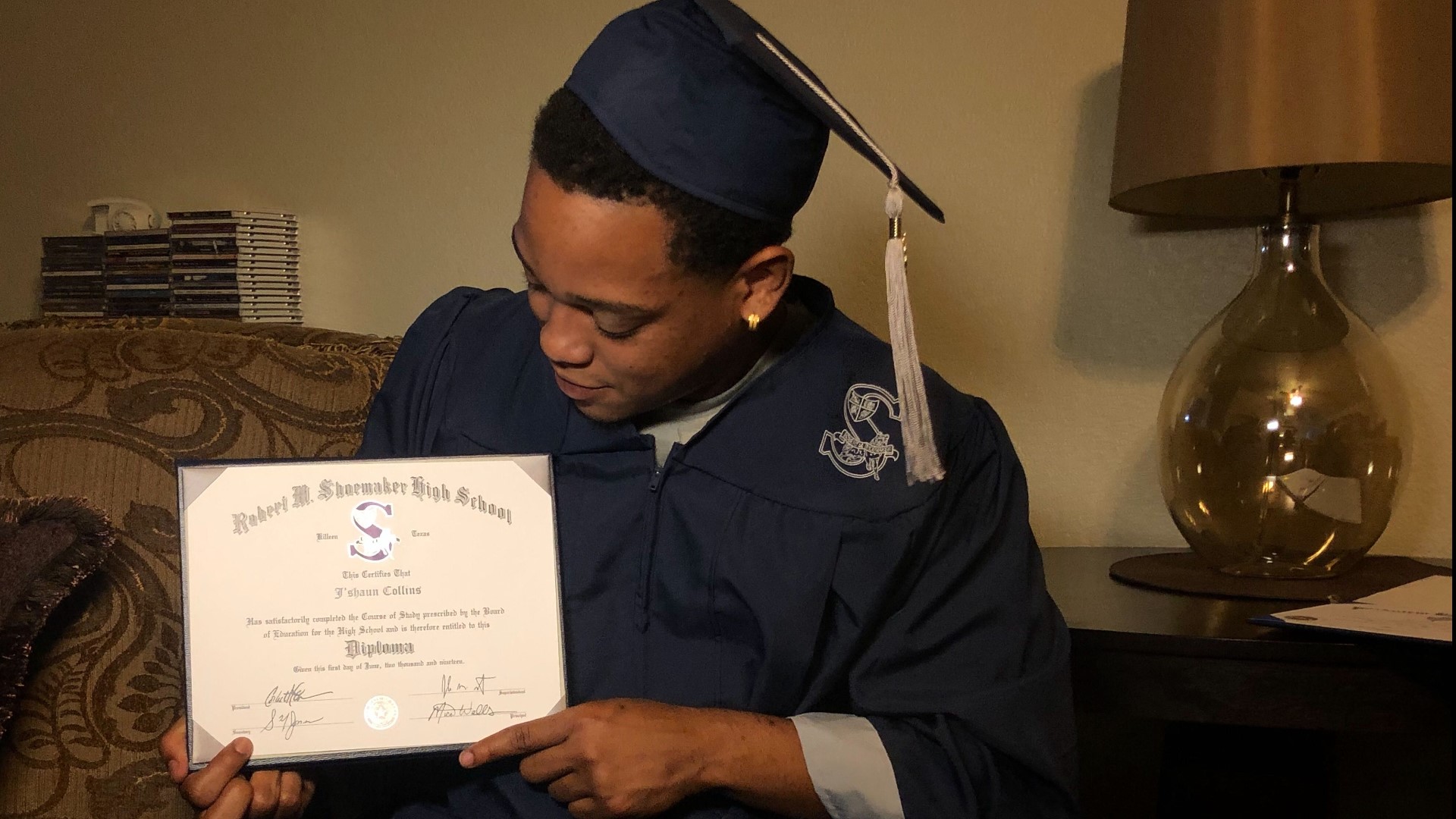 KILLEEN, Texas — J'Shaun Collins is a part of Shoemaker High School's Class of 2013. But, he just graduated with the class of 2019 last weekend. The road to receiving his high school diploma hasn't been an easy one. Six long years later—with the help of a new bill—he's finally done it.

"I can't really explain it, but it's a great achievement," Collins said.

Collins was not yet ready to take off his cap and gown after graduation. He soaked the moment in because of just how long it took to get here.

Growing up, he was known as a bright kid and a talented standout on the Shoemaker football team. He had big plans for his future, but his path changed courses in his senior year of high school.

While he passed all the required classes, Collins always struggled with math. After he took the TAAKS test four times, he failed it by one question, which kept him from graduating with his class. The test was changed to the STAAR the following year, leaving Collins with no diploma and no clear path forward.

"I had a plan. I wanted to go to college and play college football and study a major. But you can't do that without a diploma," he said.

Discouraged, but not defeated, Collins said a school counselor told him about Parkview Baptist School in Houston that helps kids in his situation. He took courses there, passed and received his diploma, only to later find out the school was fake.

The school was accused of handing out bogus diplomas, including Collins', and was sued by the state. Collins' fake diploma was not honored anywhere.

Collins was ready to give up or try getting his GED, but his mother held out hope. The recent passing of Senate Bill 463 turned things around. The bill lets students who fail required exams graduate if a specially appointed committee considers them ready.

Collins took a final math exam in May and passed. Finally, he was allowed to cross the stage on June 1, officially becoming a graduate of Shoemaker High School.

He toted his class of 2013 tassel through it all.

"It was amazing, like being on the football field making a play, it felt great," he said. "No matter how hard it gets, it may seem like you're getting punished or doing something wrong, but you just have to get through it."

Although he's eager to get on to the next chapter, he'll relish in the accomplishments of this one just a little while longer.

"It's something that I want to, like, show off every day if I could," he said.

Collins plays semi-professional football with the Capital City Bison in Round Rock.

He plans to continue with that, but now that he's an official high school graduate, he also plans to enroll in classes at Central Texas College.

Little River-Academy firefighters posed as police at woman's house month before boxing her in, affidavit says