How do you go on after a tornado? These Dallas businesses are finding the answer

So many people are trying to find a little bit of normalcy in the wake of Sunday's tornadoes. Luckily, there are countless companies helping in many ways. 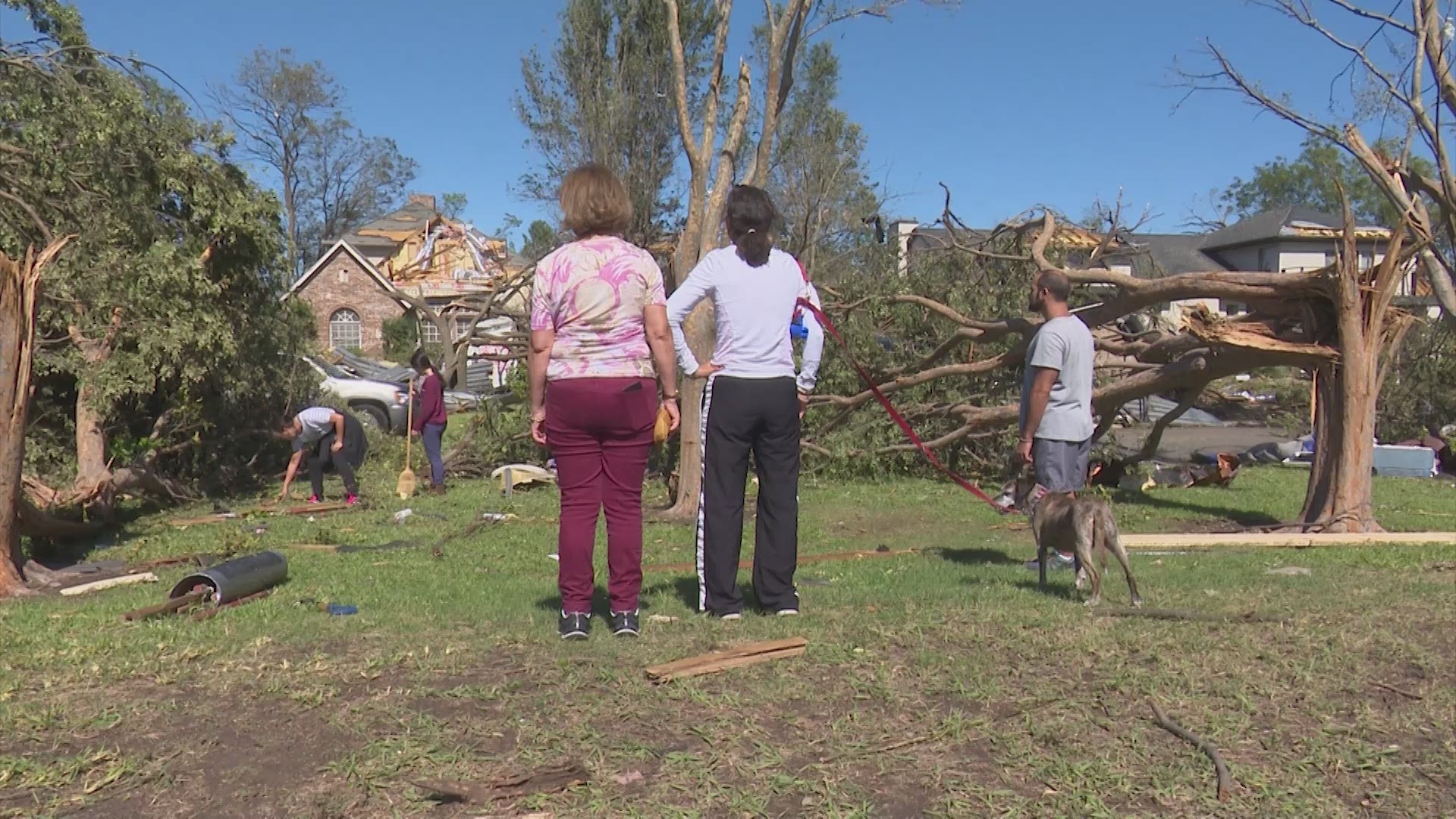 "Ma'am, are you a homeowner?" Campisi yelled through the debris on Tibbs Street. "Would you like lunch?"

The iconic Campisi's Restaurant on Mockingbird Lane was spared when an EF-3 tornado ripped apart neighborhoods and businesses Sunday night across Dallas and North Texas.

Campisi decided to take a moment Monday and Tuesday to feed those in the hardest-hit neighborhoods.

"You're the man, I Iove Campisi's," one Dallas homeowner said after Campisi handed him a pizza.

"How about some free pizza?" Campisi said to another homeowner near Orchid Lane.

It's likely the costliest tornado storm in Texas history, the group said.

The previous record was set in December 2015 when tornadoes touched down the day after Christmas. Garland and Rowlett were hit the hardest in that storm.

Credit: Jay Wallis
David Campisi (left) decided to give free pizzas to the people hit by Sunday's tornadoes in Dallas. He handed out 200 pizzas during a two-day span.

The destruction is why Campisi handed out pizza. It was an attempt to remove something as seemingly simple as finding food from people's to-do lists as they figure out what to do next.

"We're just a Dallas restaurant that's always given back and there might never be a more important time for us to give back than right now," Campisi said before finding another homeowner in need of food.

Campisi handed out at least 200 pizzas on Monday and Tuesday. He expects to hand out more through the rest of the week.

Campisi is not alone.

Other business owners and nonprofits fanned out across the area to feed people and offer respite.

"You get a traditional barbecue flavor," Stinson said, describing what every box of food includes. "Pair that with a side of green beans and starch for a complete balanced meal."

Operation BBQ Relief is a nonprofit created in 2011 after an EF-5 tornado went through Joplin, Mo.

Stinson currently heads up the Texas groups for Operation BBQ Relief. He volunteered back when the organization went to help in Joplin and now travels around the country wherever he is needed.

This week, he's in his hometown.

Credit: Jay Wallis
Jon Stinson (left) of Operation BBQ Relief helped cook more than 2000 meals in a day for those impacted by Sunday's tornadoes in Dallas.

"I have noticed there is a genuine rush of outpour to help anybody," Stinson said of those helping after the Dallas storm. "There is a sense of unity, love for one another."

Loving others — that is something Rand Jenkins motivated Texas Baptist Men to do, as he is the director of advancement for the religious organization.

Texas Baptist Men partnered with nonprofit Buckner International to set up locations to receive food. They are focused on getting food to the kids who rely on school lunches but can't get them because their schools are destroyed.

"The motivation for this really is following Christ's example," Jenkins said. "He fed people. People need to eat. He loved people. And that's what we do."

These two groups helped feed about 1,350 people Tuesday and Wednesday.

They were set up at Jose "Joe" May Elementary School for lunch on Tuesday and First Mexican Baptist Church for lunch and dinner on Wednesday.

Credit: Jay Wallis
Marcela Dominguez works for Buckner International. This organization partnered with Texas Baptist Men to get free food to students in the area.

"It's not just the food itself but knowing the people care," Amalio Jaimes said, who lost his home in the tornado.

He and his family were able to have a meal Tuesday afternoon.

When most people go through their normal morning or nighttime routine, taking a shower is usually a part of the process.

But what if Sunday's tornado tore through your bathroom and now there's no place to even take a shower?

That's why Planet Fitness is stepping in and offering the use of its showers at their 27 locations in North Texas free of charge until Oct. 27. The locker rooms are also free for anyone to use during that time frame.

Credit: Jay Wallis
Planet Fitness is allowing people impacted by Sunday's tornadoes to use their showers for free.

The Planet Fitness on Greenville Avenue is in the storm's path. Trees and branches are spread across the streets around the facility.

The only damage inside was a couple of letters falling off the walls.

General Manager Spenser Johnson said he was happy to learn about how his company is helping.

"It gives us an opportunity to reach out to our community since we were the ones that were most impacted," Johnson said.

But for some, locker space isn't enough.

Jason Bowers decided to open up his entire floor for any business — or person — that needs a place to work or simply stay.

Bowers runs Venture X at the Belo Building in Dallas. He said he knows many businesses and homes were destroyed and people need a place to work.

Credit: Jay Wallis
Dallas company Venture X is offering any company or business hit by Sunday's tornadoes to use their rooms for free.

Chandler Baird said the Alamo Drafthouse wants to be a good neighbor to those who lost power or were in the path of the storm.

The Alamo Drafthouse theaters are offering free tickets to G and PG-rated movies at the Lake Highlands, Las Colinas and Richardson locations.

"We're a neighborhood theater, and we want to be able to give back to the people that take care of us," said Baird, who is the general manager of the Alamo Drafthouse in Richardson.

"It was kind of a stressful Sunday night," Gangstead said. "It was time to do something just fun for them."