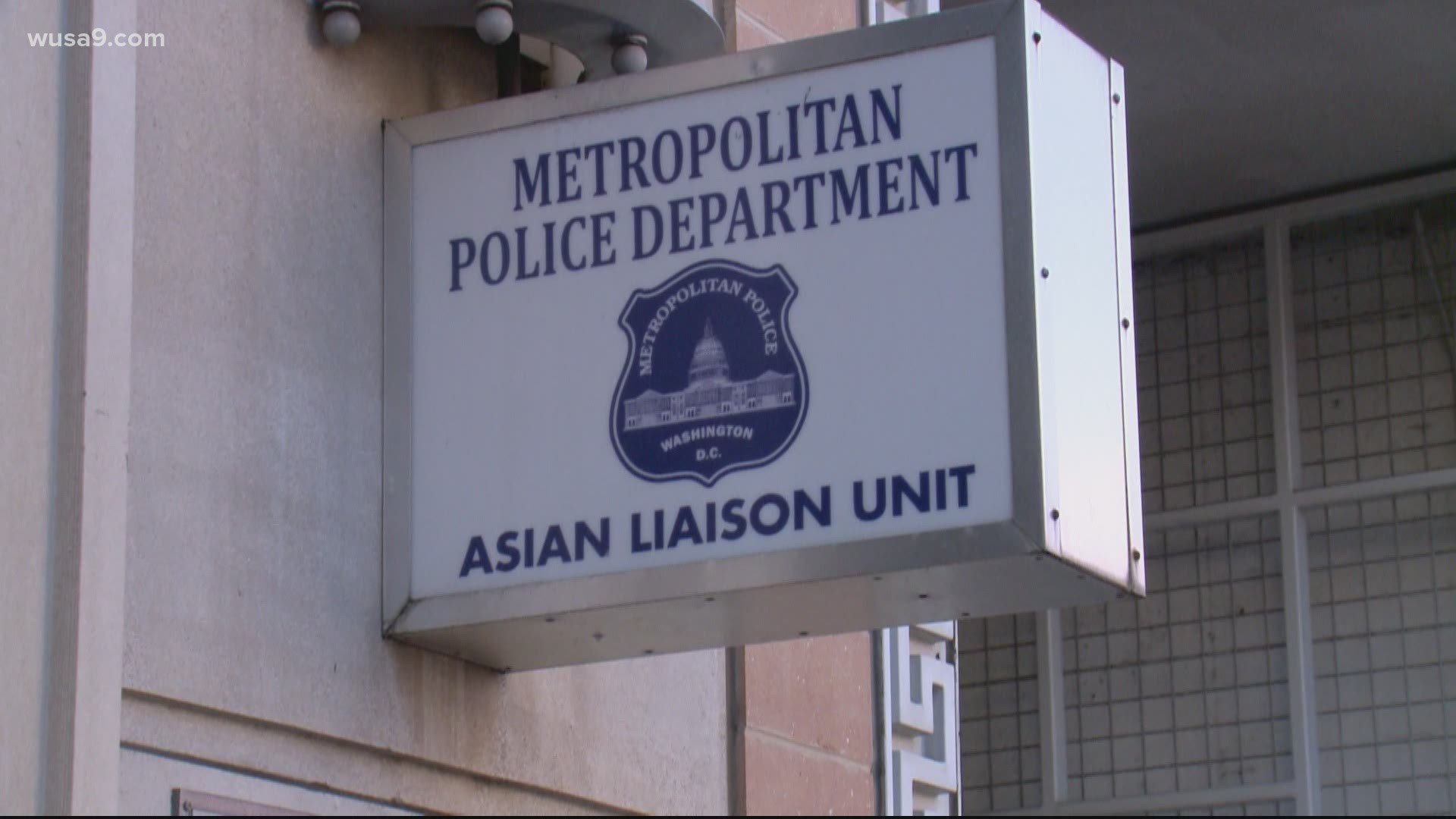 WASHINGTON — It has been quite a busy year for the small yet mighty team known as the Asian Liaison Unit in the District.

The five-member group under the Metropolitan Police Department has been addressing public safety needs and concerns from business owners in the Asian American and Pacific Islander community. Since it was established in the mid-90s, the unit has evolved over the years, but its real impact could be felt within the last year since the COVID-19 pandemic first hit.

"We have increased our outreach just to help out. Especially in situations where people need more outreach. We have a wide range of officers that speak different languages that are out in this community," Lt. David Hong told WUSA9.

Hong oversees the police department's Special Liaison Branch which includes the ALU. His team canvasses streets and visits businesses on a daily basis to not only build trust but hear out concerns and pass along pertinent information such as COVID-19 and vaccines and how to stay safe amid the recent uptick in carjackings.

Most recently, they provided information on auto theft prevention and other safety tips.

The group also held drives to support Asian-owned businesses affected by the pandemic and helped officers following the riots last summer. Officer Michael Kim said the most complaints he's received are either about loitering or the lack of profit.

"Because of COVID, a lot of businesses are having trouble," Kim said. "I'm trying to gain their [owners] trust while at the same time listen to their problems."

WUSA9 was invited to follow the officers on their everyday routine in Chinatown. But the group has been expanding efforts throughout the city.

Today I followed @DCPoliceDept’s Asian Liaison Unit as officers checked up on Asian-owned businesses and addressed any safety concerns. The group has been especially busy this past year due to COVID-19. “We increased our outreach just to help out,” Lt. David Hong said. @wusa9 pic.twitter.com/DxaCQ5Naoy

The impact of COVID-19 is felt this Lunar New Year, which would typically be a joyous occasion involving large family gatherings and lively events. The celebration has also been dimmed by the ongoing attacks against the Asian American and Pacific Islander communities across the country since last March.

While it's unknown if the race is the exact reason behind the cases of violence, harassment and vandalism, the amount has significantly gone up since the start of the pandemic. Community advocates blame President Donald Trump for his rhetoric by calling COVID-19 the "China virus" or "Kung Flu."

Compared to other cities such as New York and San Francisco, the case count in D.C. has been significantly lower. MPD reported three bias-related crimes against Asian Americans in 2020, but none in 2021 thus far.

"It has been lower than others I think because it has a lot to do with the community outreach and how we're in the community on a daily basis," Hong said.

Kim believed the city's culturally diverse demographic also plays a role in the smaller numbers compared to other cities including parts of Northern Virginia and Maryland where the population is larger.

Across the DMV, the Asian Americans Advancing Justice-AAJC tracked 29 reports of harassment related to the pandemic. The group Stop AAPI Hate has kept a database of reports from close to 3,000 people who have experienced some form of Asian-related hate crime.

Most recently, burglars targeted three Asian-owned restaurants in Columbia in the middle of the night last week. The culprit has not been arrested.

RELATED: Lunar New Year celebrations dimmed by instances of hate | Hear Me Out