Ellison HS graduate biking 4,000 miles across US for cancer research

Chantelle Cancel said the ride is a chance to connect with those directly affected and to make a difference in their lives. 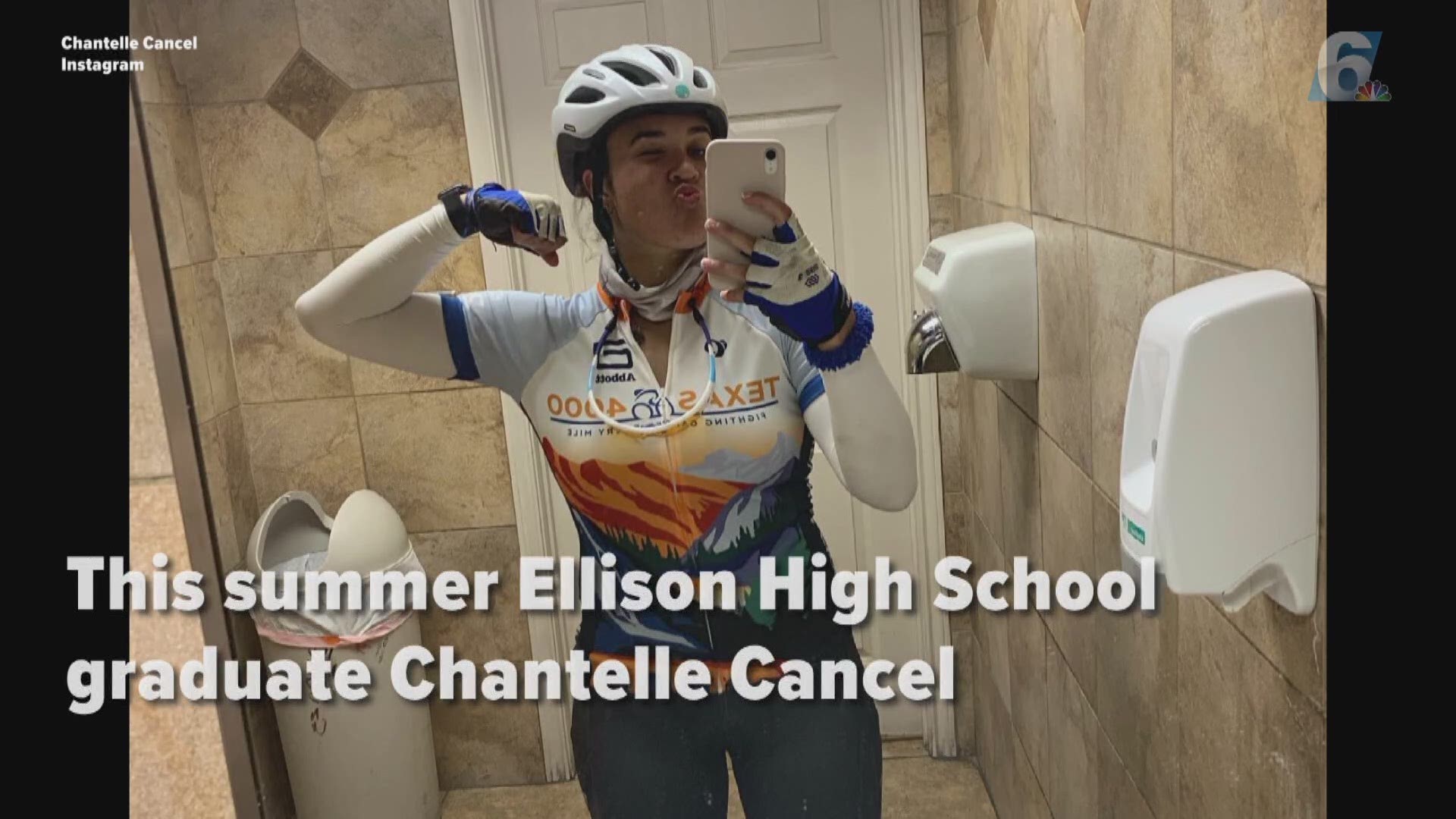 BEAUMONT, Texas — There's a group of students at the University of Texas at Austin who are embarking on a 70-day bike ride that will cover multiple states in hopes of raising awareness and making a difference in the ongoing fight against cancer.

Chantelle Cancel is a 19-year old graduate of Ellison High School in Killeen and was selected to ride in the Texas 4000 this summer, after applying two years ago.

Cancel said her aunt is a two-time breast cancer survivor and her great-grandfather passed away from cancer, so she's seen its impact and felt it, too.

"Thankfully, nobody in my immediate family has had cancer but just seeing how it has affected people and the relationships they have with other people in their lives, it just motivated me to be a part of the journey," Cancel said.

The journey this summer is with Texas 4000, an organization that envisions a world where all students can become leaders in creating a cancer-free future, according to its website.

The organization gets its name from its culminating event every summer, a 4,000-mile bike ride from Austin to Anchorage. The ride is a little different this year as the country comes out of the pandemic and so, instead of Anchorage, the ride begins and ends in Austin.

Cancel and about 80 other participants left Friday, June 4, along the Ozarks route and she said they will be biking the entire mid-United States that will take the group from Texas and through New Orleans, Arkansas, Minnesota, Wisconsin, South Dakota, Idaho, Arizona, Nevada, New Mexico and back to Texas.

Credit: Chantelle Cancel
This is the route being taken by those riding in the Texas 4000. The white dots represent breaks along the route that will take riders through the midwest over the next 70 days

"I try not to zone out during these rides, I try to stay in touch with my teammates," Cancel said, explaining they stay in a double-pace line and someone is always right next to someone else. "We talk to each other and to people in the community off the bikes, we had someone stop us at a rest stop to ask us what we are doing and why, that is what this is about, having those conversations."

Cancel said she struggled at first with what's known as "imposter syndrome" because no one in her immediate family has had cancer, like others she has met though the program. In the end, she felt she should champion the cause because her voice matters, too.

"There's no requirement for you to be a champion for this cause and so I just left all that behind and that's just it, it's been amazing to meet all these people. I am just excited to be a part of it and for the people we will meet along the way," she said.

Credit: Chantelle Cancel
Chantelle, foreground, poses for a picture with a fellow rider as the embark on a 4,000 mile journey for cancer research

Cancel said the group just left Houston and is headed to Beaumont to rest for the night before they venture into Louisiana on Friday, she said while there's always something else she could be doing, the chance to make a difference was too much to pass up.

"It comes down to the opportunity because how many people can say they were offered the opportunity to train for a summer ride that would raise, a minimum of $4,500 and to volunteer a minimum of 50 hours to the community throughout their time in Texas 4000 and then be able to embark on this adventure," Cancel said.

To be selected for the ride was extensive, Cancel explained, noting the first requirement is to be a student at UT in Austin. She said she filled out an application and went through two rounds of interviews before learning she would represent Texas 4000.

Cancel said she is so passionate about spreading awareness, she's created a special Instagram page that will take everyone on the ride with her through a series of photos and vlogs.

Cancel also wants to hear from you on her trip and how cancer has impacted your lives because she wants to honor those people who are fighting the disease and even those who lost that battle.

"We do ride dedications every morning when we wake up and gratitude and during grad dedications we circle up and tell the entire team about people we know who have been impacted by cancer and we write their name in Sharpie on our legs so when the hills get high and the weather gets hot, we just look down and be reminded of what and who we are riding for," she said.