A stream of vehicles and motorcycles escorted Lance Cpl. Schmitz's remains, while flag-waving residents lined the route to honor the hero 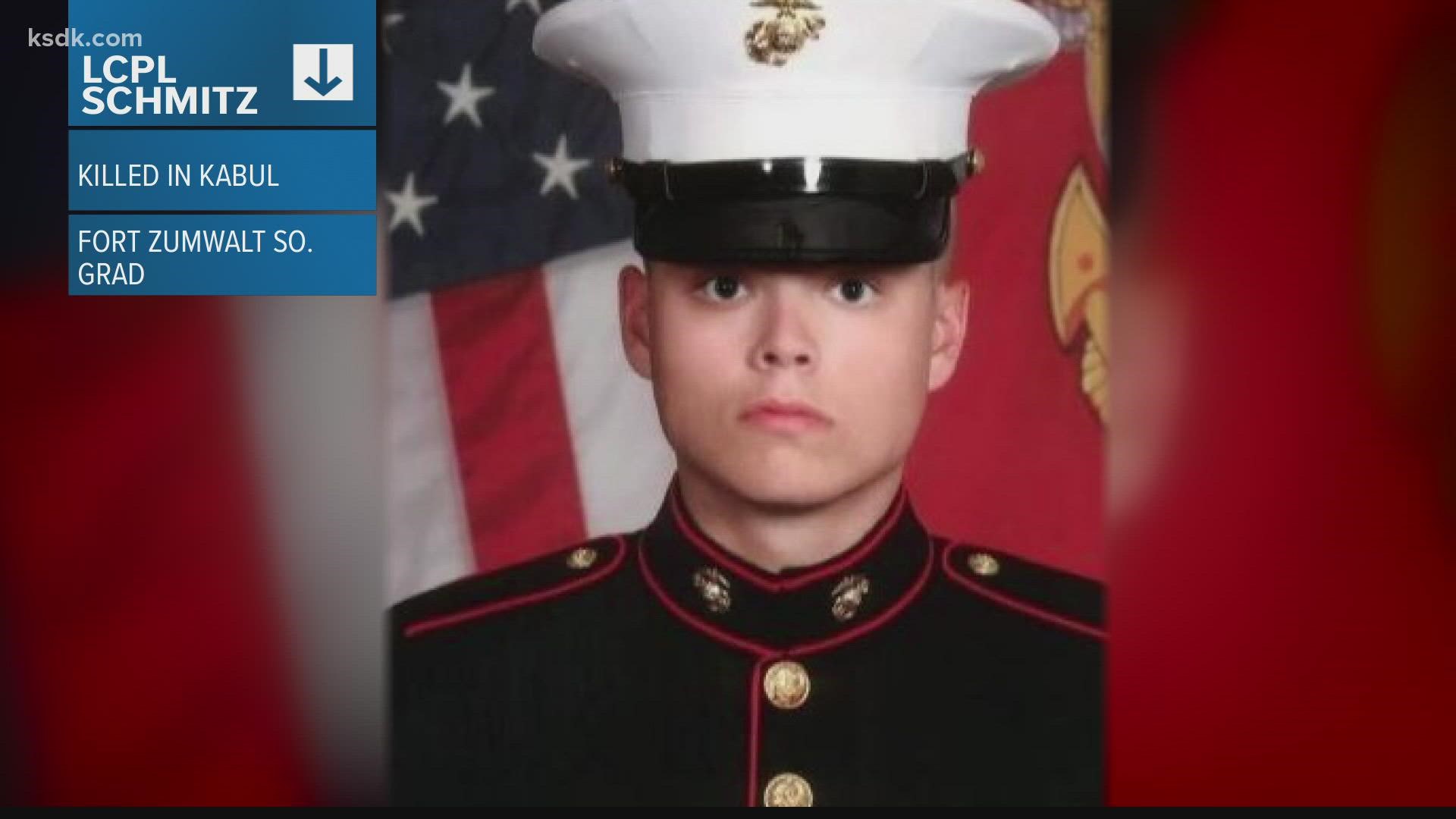 ST. CHARLES COUNTY, Mo. — The procession for local fallen hero Marine Lance Corporal Jared Schmitz is stretching across the St. Louis area. You can watch 5 On Your Side's coverage in the video player here.

Schmitz was one of 13 U.S. service members killed in a suicide bombing at the Kabul airport in Afghanistan on Aug. 26. Schmitz was among a group of Marines sent back to Afghanistan to assist with evacuation efforts.

His remains arrived at St. Louis Lambert International Airport at about 12:30 p.m. and the procession got underway a little over an hour later.

Schmitz's remains were transferred into a military Humvee equipped with the U.S. Marine Corps flag, a U.S. flag and a clear back door allowing those honoring the military hero to see his casket.

After leaving the airport, the procession continued west on Interstate 70. The route is 12 miles long stretching from Lambert to Baue Funeral Home, which is just off the Cave Springs Road exit in St. Charles County.

Hundreds of police motorcycles and Patriot Guard Riders from across the U.S. proceeded Schmitz's remains.

All along the route, hundreds gathered to pay their respects. Many of them stood along the side of the interstate waving flags and wearing red, white and blue. Even more people stood in the grassy area just off the highway.

Law enforcement vehicles and first responders followed behind the Humvee as it made its way to the funeral home. Fire departments lined the overpasses, draping their flags and raising their ladders to honor Schmitz.

Thompson said the interstate closure is for safety reasons because so many slow-moving vehicles will be involved.

Watch the procession in its entirety in the video player below:

A public visitation is set for Saturday, Sept. 11 from 3-10 p.m. at Baue's Cave Springs location. The funeral service will be private. Schmitz will be laid to rest in Jefferson Barracks National Cemetery.

Lance Cpl. Schmitz, 20, grew up in St. Charles County and was a 2019 graduate of Fort Zumwalt South. His father told 5 On Your Side his son’s interest in the military started in high school, and he trained before he even was a recruit.

"He knew his calling was to help and to serve and to protect and being a Marine was going to be enabled to do all of those things," Mark Schmitz said.

The grieving father said remembering his son’s bravery has been a way for him to hold on.

"He has been my strength, he’s been my light," Schmitz said.

The Associated Press contributed to this story.