It found that, despite public statements from oil and gas advocates, fossil fuel production in Texas decreased significantly before the mass power outages. 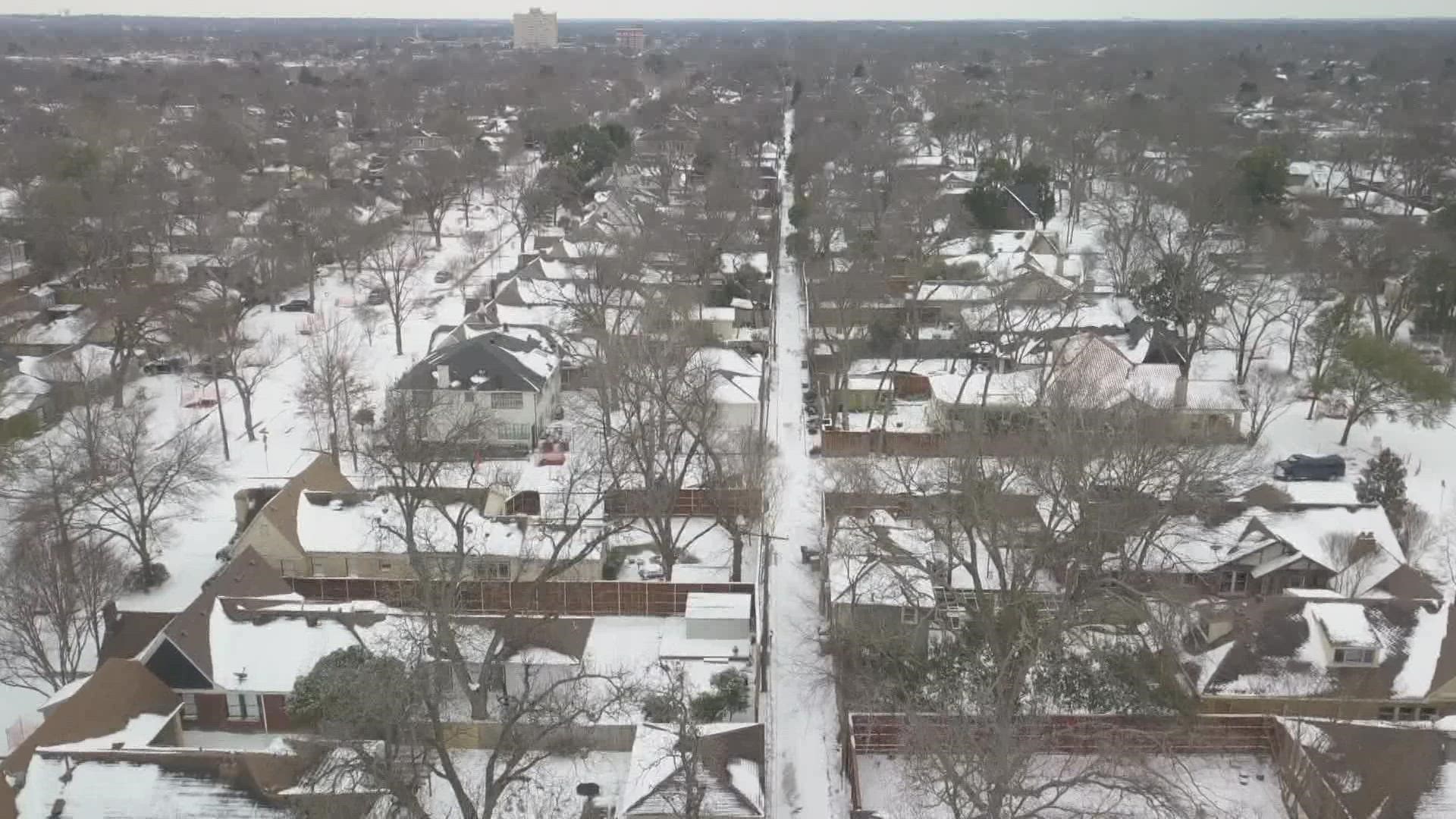 DALLAS — A national energy regulator blasted Texas for failing to winterize its energy system a decade ago after the 2011 winter storm, leading to the devastating and historic power outages of this past February’s winter storm that led to billions of dollars in damage and hundreds of lives lost.

Regulators found the biggest contributor to Texas' power outages was the failure to winterize the state's power plants.

The second biggest cause of power outages was fuel supply issues, driven largely by natural gas shortages. In fact, it was the largest U.S. monthly decline of natural gas production on record, according to regulators.

“This is a wake-up call for all of us,” said Rich Glick, chairman of the Federal Energy Regulatory Commission, or FERC, during a national briefing on Texas’ February winter storm.

“There was a similar inquiry after Texas experienced extreme cold weather in 2011, but those recommendations were not acted on,” he said. “We can’t allow this to happen again. This time, we must take these recommendations seriously, and act decisively, to ensure the bulk power system doesn’t fail the next time extreme weather hits. I cannot, and will not, allow this to become yet another report that serves no purpose other than to gather dust on the shelf.”

FERC chairman says Texas cut off its "nose to spite its face" by not being connected to other grids. Texas didn't connect to other grids because it didn't want federal regulation. He's also calling for greater regulation of natural gas similar to the power industry.

In a media briefing afterward, Glick said he was still at a loss as to why those 2011 recommendations weren't followed. He said it must not be allowed to happen again.

"That’s a lesson for all of us," he said. "We need to follow through on these recommendations, take them seriously and as expeditiously as possible and not allow what happened to happen again, ever."

He also said that Texas' decision to go it alone on its power grid had led to devastating consequences. ERCOT is not connected to other power grids largely because Texas did not want its energy markets to be subject to federal regulation. Glick said Texas had "cut off its nose to spite its face" and that those decisions had cost people their lives.

He told reporters that he believes a middle ground can be found that would allow ERCOT to connect to other grids while still giving Texas independence from federal market regulation.

"I could care less about jurisdiction," he said. "What I care about is making sure we don't have a repeat of what happened this past winter."

While FERC does not have authority over ERCOT's energy markets, it does have the power to regulate reliability, and that includes setting mandatory weatherization standards.

After the February storm, Texas lawmakers and state regulators passed laws addressing some causes of the winter storm. But they were widely criticized for not going far enough to force power plants and, particularly, natural gas facilities - which provide fuel for most of the state’s power plants - to winterize their facilities on meaningful deadlines to prevent future mass grid failures.

Regulators found that, despite public statements from oil and gas advocates, fossil fuel production in Texas decreased significantly before the mass power outages began after Valentine’s Day, suggesting oil and gas facilities were affected by cold weather and not primarily lack of electricity, as they claimed.

"FERC and NERC kind of put that to bed today and said it was roughly half and half," said Doug Lewin, an Austin-based energy expert. "You had about half of the outages were gas outages ahead of the power outages. And then the power outages caused additional problems in the gas supply system, which again, I think is what everybody kind of suspected."

Lewin said what FERC and NERC's preliminary findings make clear is the need to weatherize the natural gas supply system or be at serious risk of outages in a future winter storm.

In a briefing with reporters, Glick said the findings make clear that Texas' power outages were not the fault of the renewable energy sector as some have claimed including Texas Gov. Greg Abbott.

"That's pretty much been rebutted," he said. "But I want to make it clear, that doesn't mean our any other renewable source gets off scot-free. .. If you look at the evidence that all sorts of generating facilities suffered significant issues associated with the cold weather."

During their presentation, regulators pointed out that ERCOT's power outages were by far and away the worst of all the electric grids in the country during the week of Feb. 14. The other power grids, regulators, said were able to mitigate their outages by getting power from other grids. ERCOT cannot do so because it is not connected to the other grids by design.

“This is not going to be a paper report that's going to just sit on somebody's shelf and be valued because of the length of it and the weight of it" Jim Robb, president and CEO of NERC, said in a media briefing. "But we're really going to be very committed to putting this into action."

February's winter storm was the fourth winter event that led to massive power outages across the country. But it was the worst event of all of them -- by far.

Given the magnitude of ERCOT's outages, Robb said in a briefing that he thought it was "impressive that the operator managed to not let the entire Texas grid collapse."

"That's not much comfort to those who were without power for six or seven days, but I think there's something to celebrate there," he said.

The preliminary report makes nine key recommendations, including changes to mandatory reliability standards that build upon the recently approved standards developed in the wake of a 2019 joint inquiry into a prior cold weather event. Among those are:

The presentation of the preliminary findings and recommendations is available here.

The FERC, NERC and regional entity staffs will release their final report in November.