Gatesville teen to have surgery on 17th birthday for 4th brain tumor; How you can help

Christopher Johnson's mom, Crystal Whalen, said her son is having his fourth surgery this Friday, June 11 -- which is his 17th birthday -- with courage and hope. 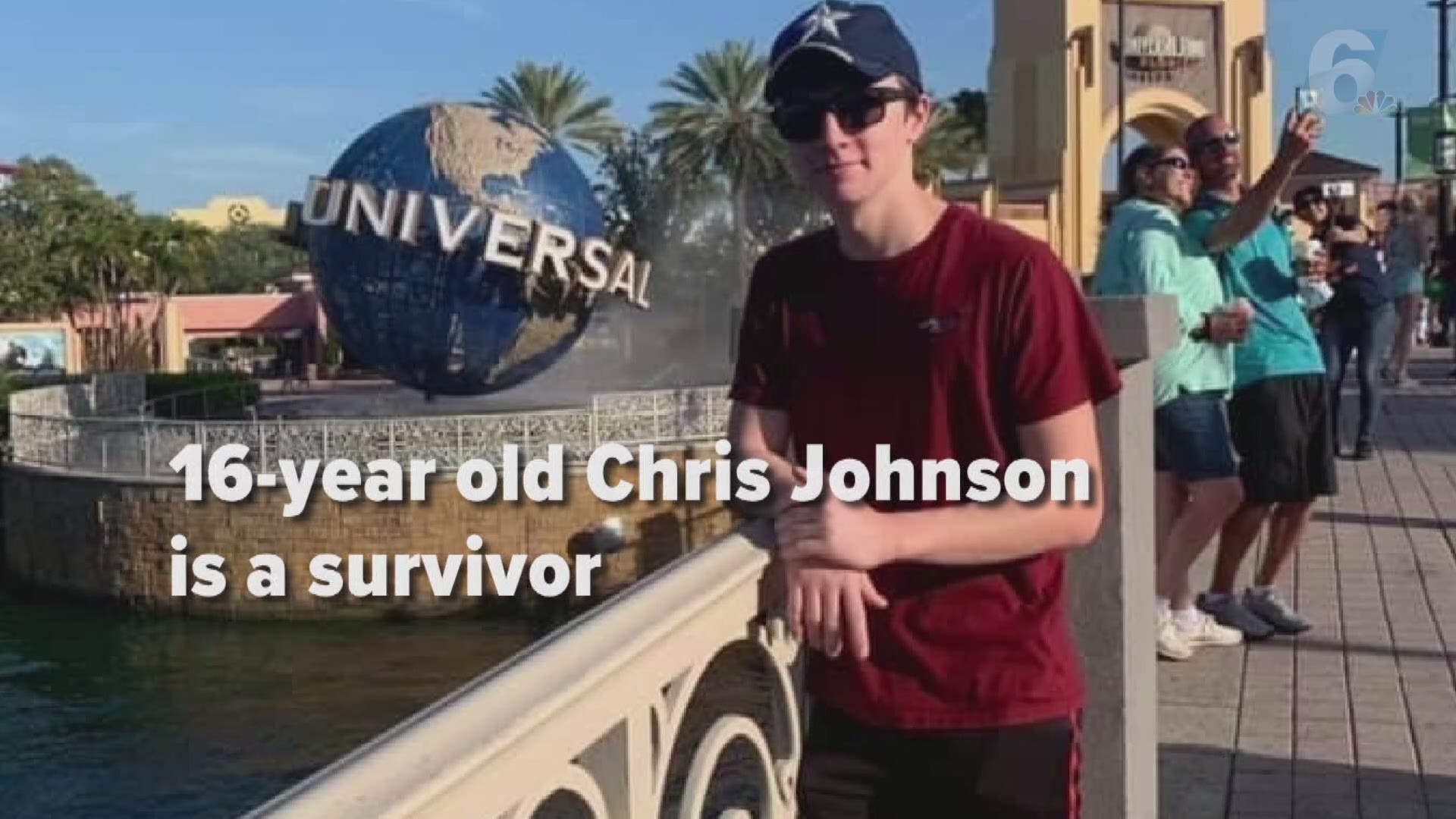 GATESVILLE, Texas — Editor's Note: A GoFundMe link to help Christopher Johnson's family with the costs of the surgery and recovery is listed at the end of this story.

Christopher Johnson, an incoming senior at Gatesville High School and a drum major in the Hornet band, is a three-time cancer survivor who has just been diagnosed with his fourth tumor.

"This tumor is called a Juvenile Pilocytic Astrocytoma and it's not common to recur," said Crystal Whalen, Johnson's mother, who spoke to us via the telephone Tuesday.

Whalen said her son's health issues began when he was just 7 years old. In July 2011, she said he began not feeling well and was plagued by headache and lethargy. He would projectile vomit and, at the time, she didn't know that the symptoms Johnson presented were classic signs of swelling on the brain, Whalen said.

"We went to the local eye doctor at the Walmart in Harker Heights and she noticed right away that his optic nerves were swollen," Whalen said. "We went to Scott and White Emergency in Temple and they sent us straight back and we found out at the time he had a mass and a cyst between the sizes of a tennis ball and a softball."

Credit: Crystal Whalen
Christopher Johnson's health issues began when he was 7. In July 2011, she said he began not feeling well and was plagued by headache and lethargy.

Whalen said they admitted him into the ICU immediately and Johnson had his first surgery. The surgery, she said, cost him some of his lower right peripheral vision.

Over the next year and half, Johnson would undergo scans and everything came back clean, until December 2012 when another tumor was found and a second surgery was performed.

"A month later, they did an MRI follow-up and they discovered that, either, the tumor hadn't been removed all the way or it had regrown," Whalen said. "That's when they sent us over to Texas Children's Hospital in Houston and in April 2013, he had his next surgery."

Whalen said they were a little more aggressive and went into Johnson's brain matter a little bit in hopes of collecting any cells in there they could have missed and to give Johnson a fighting chance at not having the tumor return.

It's been eight years since that final surgery and all scans and follow-ups have been clean until this last one in April.

Whalen said the three tumors previously had been exterior tumors, but this one is internal and is near the visual cortex, which is found in the cerebral cortex that processes visual information.

Whalen said Johnson was going into his regular oncologist two months ago so he could get a letter that stated he could follow his dream of being in the military. She said he's facing the surgery this Friday, June 11 -- which is his 17th birthday -- with courage and hope.

"In Chris's mind, if he was going to lose his sight and there was going to be complications, he'd rather deal with it now so he can figure out how to live his life and carry on versus keep watching the tumor, he goes to college, the tumor gets too large and he loses his sight," she said. "This kid is very old soul and very intelligent."

Whalen said they are taking precautions and want answers to what's plagued Johnson over the last decade.

"When we get the biopsy done this time, we are asking for genetic testing to see, maybe not this tumor, but to see if it's something in Chris's genetics," she explained.

In May, they met with Texas Children's Hospital for a consultation and they said they believed they could operate and remove the tumor successfully. Whalen said that brought relief and hope to her son, even with the impending complications that could follow.

Credit: Crystal Whalen
Christopher Johnson, an incoming senior at Gatesville High School and a drum major in the Hornet band, is a three-time cancer survivor.

Whalen said she's gone through all of the stages of grief over the last two months, but says watching Johnson handle it the way he has, was huge for her. She said the first neurosurgeon's comments haven't left her mind, telling them that Friday's surgery will have the result of dependency or independency, a reason Whalen admits the first surgeon was hesitant to do it in the first place, something she respects.

Whalen did say St. Jude's board came back and unanimously agreed with Texas Children's Hospital's decision to proceed with the surgery, she said that gives her some peace and confidence.

Whalen said she's allowed her son to be a part of the decision with his own health, but even so, she admits to struggling with the unknown and things completely out of her control.

"I am struggling with what's going to happen until I can see him open his eyes and know that he sees me and know that I didn't make a mistake in backing him up in wanting the surgery now instead versus letting it weigh itself out," she said.

Whalen is asking those who can, to pray for her son as he prepared for surgery on Friday and to continue those prayers during his recovery. She said he has big dreams and won't let this define him.

"He wants to have as normal as a senior year as possible and while the high school has been great through all of this, just having everybody in the community remember that he does have deficiencies after this, those deficiencies don't outline who he is," she said. "He's the same kid they've knows all these years except he's a little bit more of a hero because he had to go through this fight one more time that most of us never do."

A GoFundMe page has been set up to help offset the cost of the surgery and what's to follow, especially as Whalen takes time off work to be with her son. She said it's humbling and unexpected, but she's so thankful to everyone.

"I will never be able to thank everyone enough for what they have done to help us," she said. "Our church has reached out and they've prayed with Chris and teachers, too, wanting constant updates."